Wherever I Look
Recaps, Reviews, and So Much More
Home Movies Come Play (2020) – Review/Summary (with Spoilers)
Movies

“Come Play” takes an interesting approach to the monster genre by giving it an emotional edge and autistic lead.

Oliver is a kid with autism and because of that, sometimes making and keeping friends is hard. For example, there was a time Oliver was friends with a kid named Byron, but after Oliver got physical with him, that friendship ended. Which for Sarah, Oliver’s mom, was unfortunate since she is so desperate for Oliver to be some kind of normal that losing Byron evolved into a major issue.

This is mainly due to Sarah struggling with guilt over not getting Oliver tested early and all the classes and prevention that didn’t get done. Add in Oliver’s dad, Marty, there for the fun moments, not the hard ones, and it makes the family dynamic not the strongest.

Enter Larry, an unnerving but allegedly friendly monster who wishes to be Oliver’s friend. However, just because Larry pushes the idea he is nicer than he appears, it doesn’t mean he doesn’t still have nefarious plans. 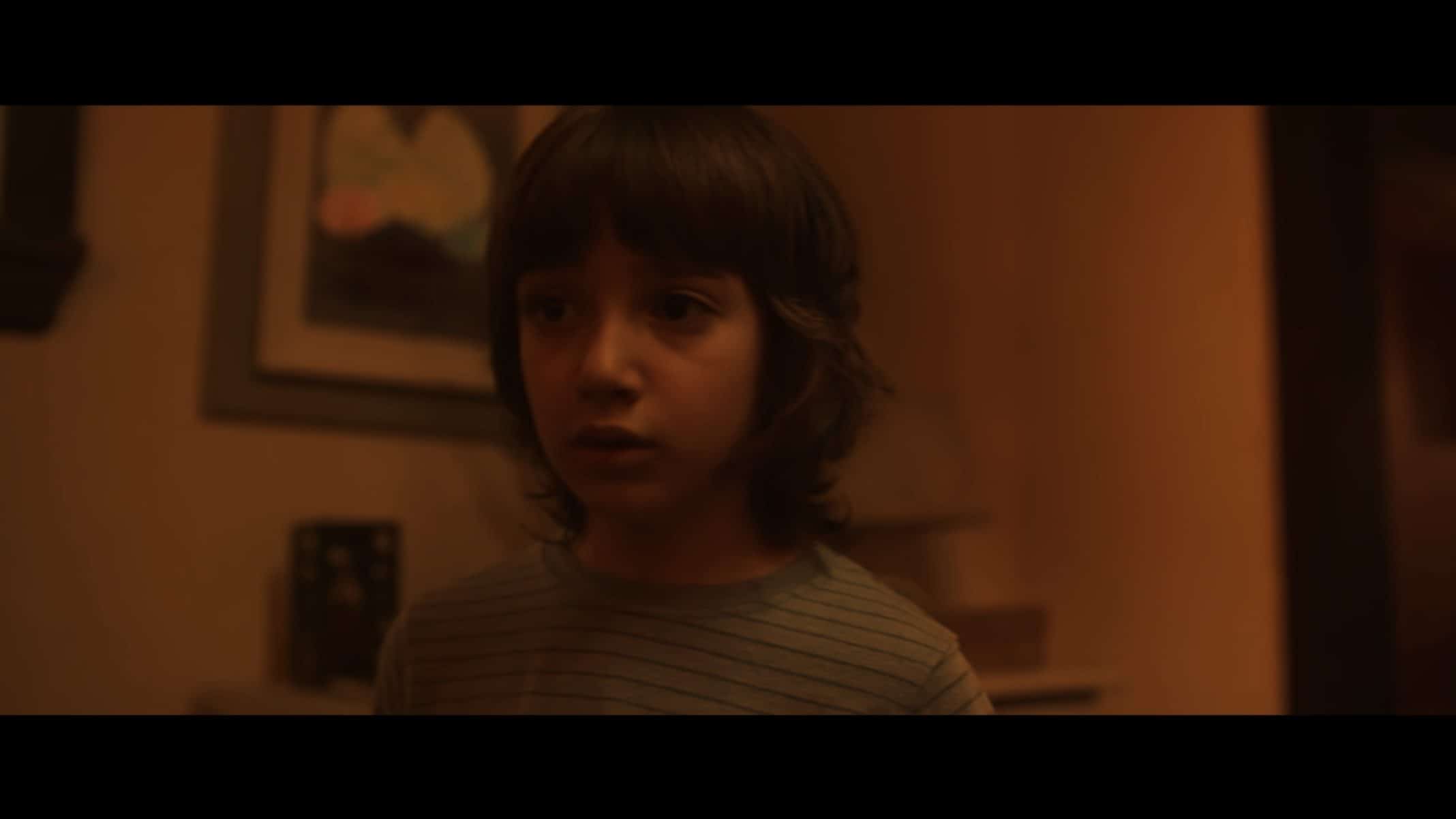 Oliver is a child with autism, who specifically is non-verbal and occasionally needs stimuli when feeling overwhelmed. Beyond that, like any other kid, he likes electronics, loves the show “Spongebob Squarepants,” and absolutely adores his dad. As for his relationship with his mom? Well, it is a bit strained. Mainly due to her pushing him to be her kind of normal and borderline rejecting what normal is for Oliver in the process. 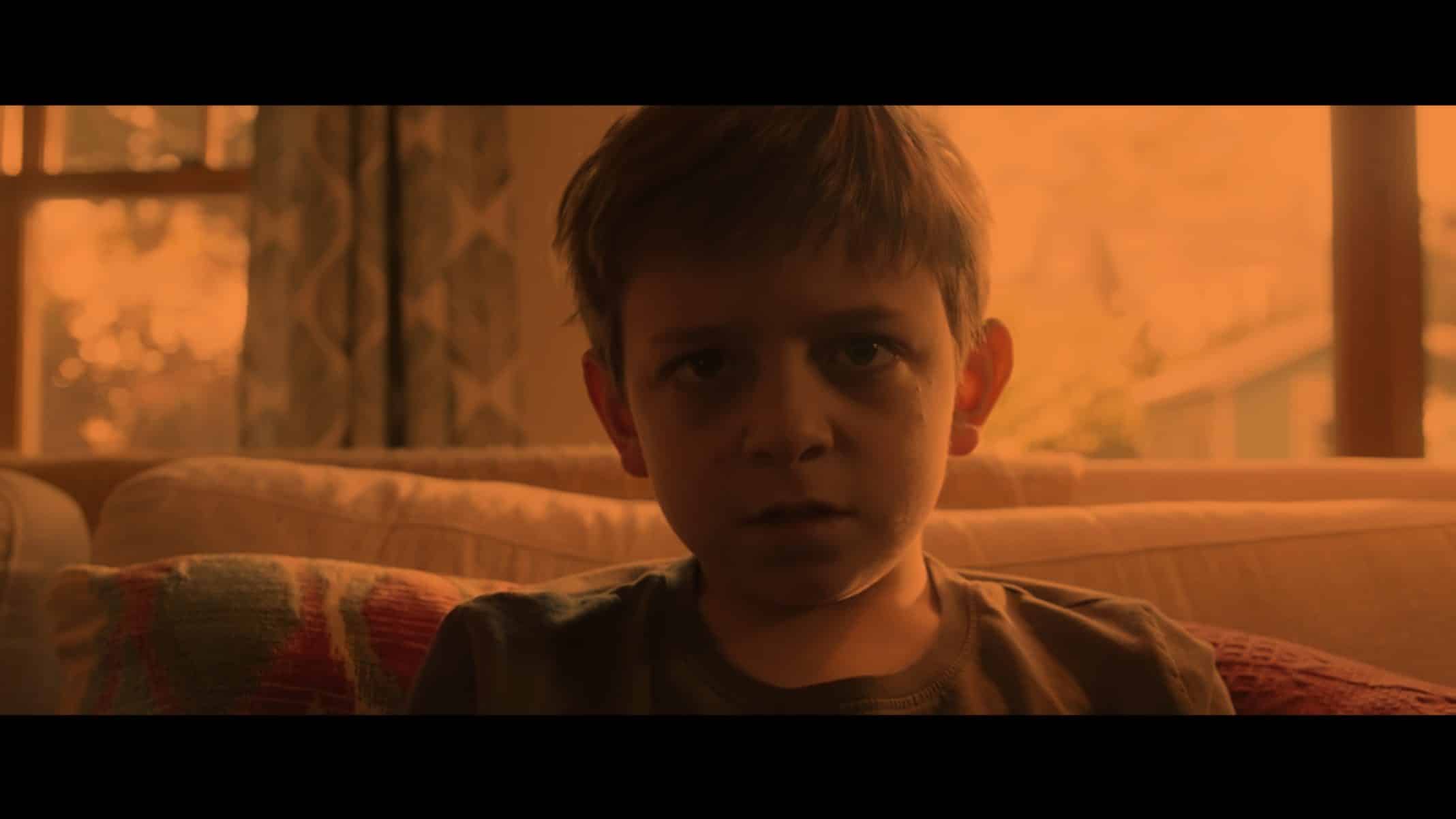 At one time, Byron was Oliver’s best friend. However, after an incident that led to Oliver punching Byron, a shift happened in their relationship.

Oliver’s mother, who, with not getting Oliver into speech therapy earlier, blames herself for his struggles to talk. 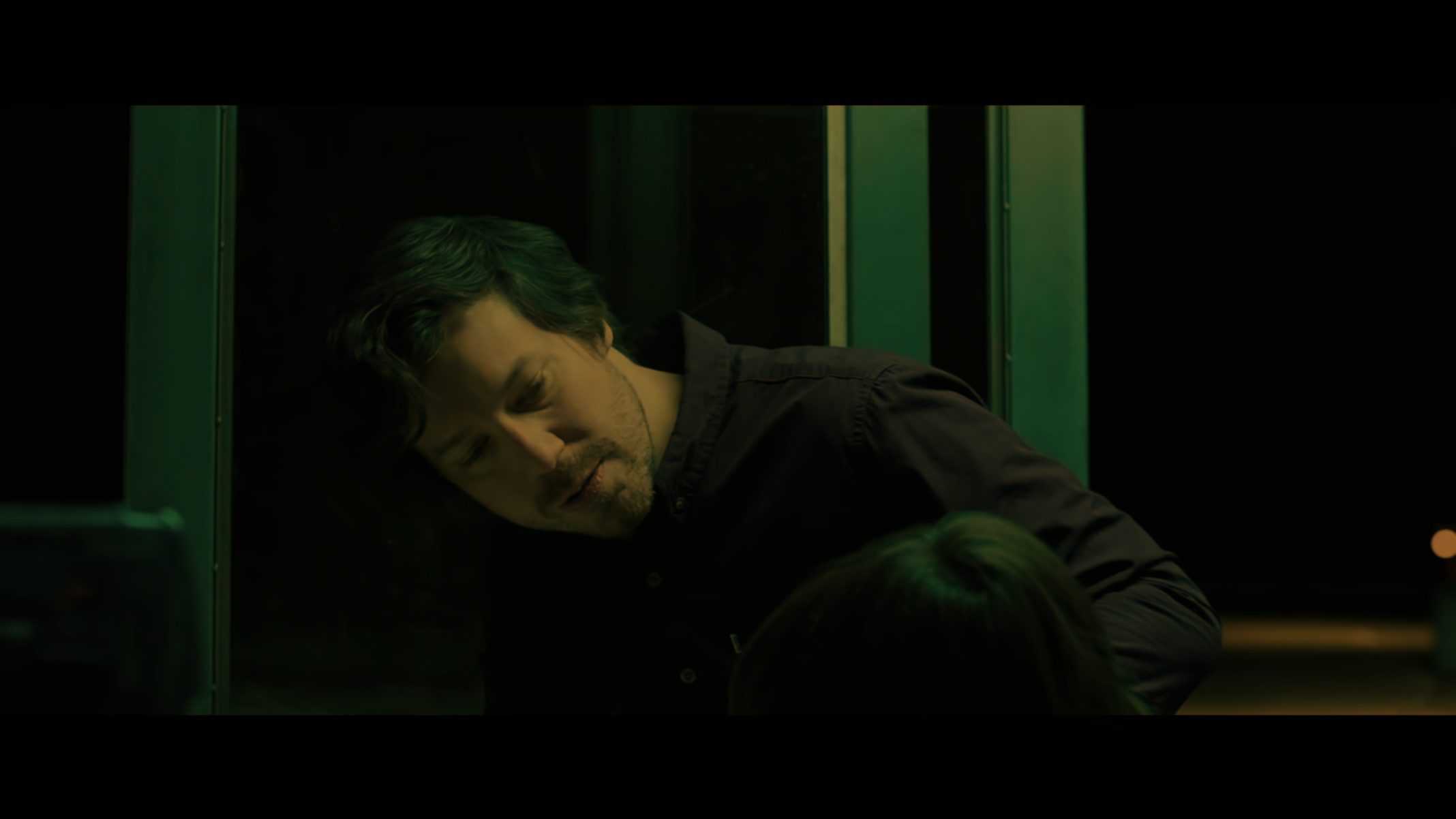 Oliver’s father, who works at a parking lot overnight, and between his lack of support when it comes to Oliver, or just in general, his relationship with Sarah is rocky.

While Azhy Robertson isn’t autistic like Oliver is, you have to appreciate how he gives Oliver a sense of authenticity to the point you feel the need to Google Robertson to check. But, I think you have to note the combination of Robertson’s performance, as a person with autism in the movie, combined with Sarah’s story of a parent’s struggle. In watching Sarah deal with guilt for not testing Oliver earlier, the lack of eye contact, communication, and trying to protect him in any possible way, it brings unexpected emotions to the movie.

What I mean by this is, as you see Oliver get teased in class, even bullied by Byron, it creates the perfect setup for Larry to want to protect and be friends with Oliver. Yet, with Sarah there, acting as the heroine, you almost feel torn. For, on the one hand, Oliver is lonely, and you can see there comes a point where you think he may join Larry just to have a friend. But, on the flip side, as it becomes clear Larry isn’t always friendly, you get a chance to see Sarah in action.

Which, towards the end, leads to a moment that may bring tears to your eyes. 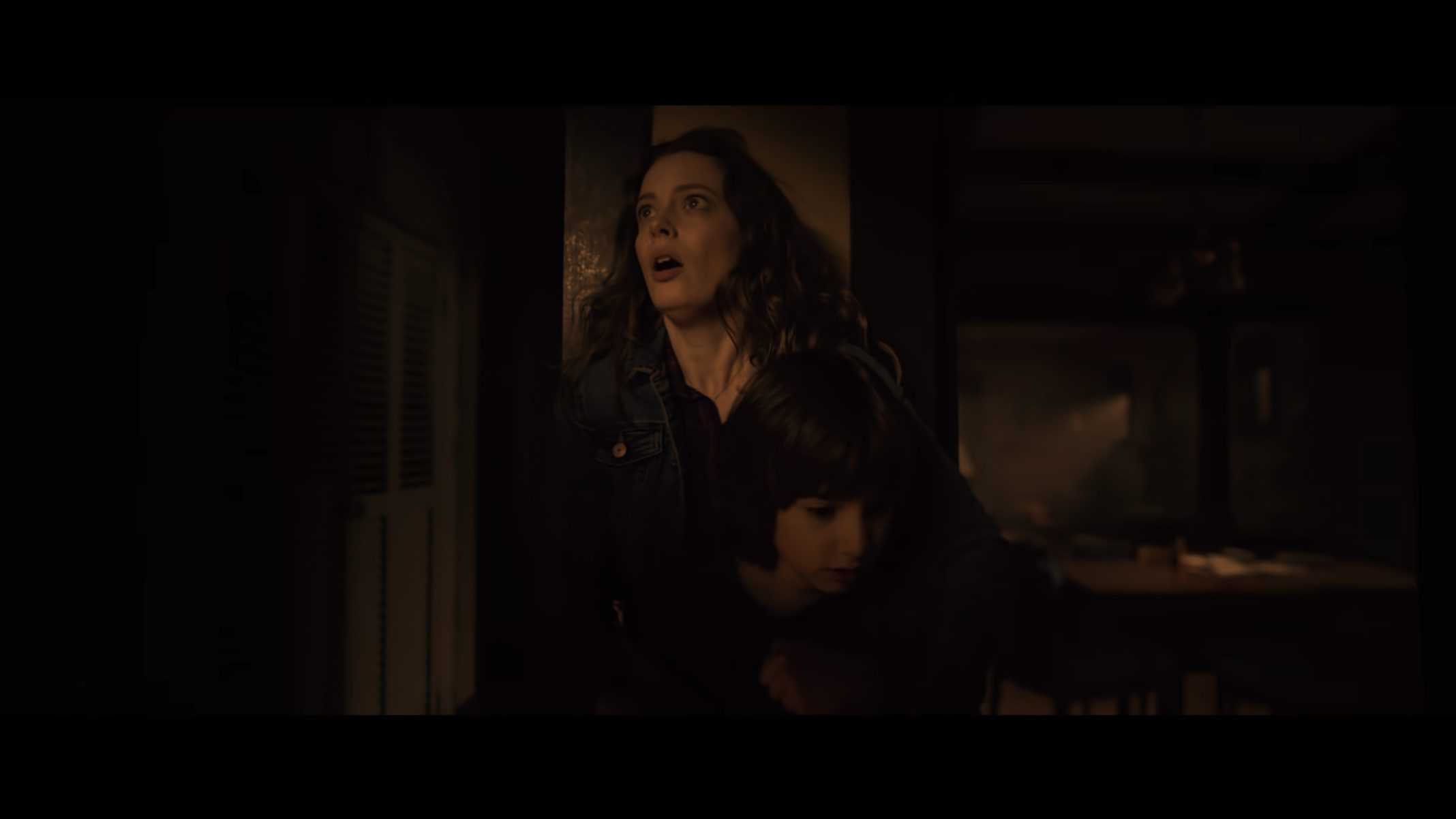 The way it is explained in the film, Larry watches people, not necessarily just kids, through their screens. Be it television, computer, or phone, and you can easily imagine if writer/ director Jacob Chase wanted to, making Larry an outright sympathetic and protective creature. Heck, the way Larry deals with Byron shows there could be a genuine love there.

However, even taking note Larry would kill a kid and definitely has no issue killing in general, you never get this outright vibe he is evil. Rather, Larry is like Oliver in some ways. Larry is non-verbal, awkward, and while capable of aggression, honestly, all they want is a friend. It’s just because they are different that it is immensely hard, and it does become frustrating.

Hence Larry going to such lengths to secure Oliver, despite Sarah and Marty, and the potential of Oliver making friends eventually.

2020, with most studios pulling damn near anything they think could make them a notable amount of money, have left theaters without much content. Heck, one could submit that the films usually dumped in January, they are now getting to live outside of that short, pre-award season window. But when it comes to “Come Play,” you get a proper, could be a notable hit Halloween, movie.

Why? Because “Come Play” gives you what you expect, which is jump scares, yet it also wants to go deeper. It wants the unique characteristics of its lead to be authentic and to just as much build a story around that as it does the monster it wants you to fear. Even though, in reality, the monster, Larry, isn’t really the villain here. It is the feelings of isolation and fear, which make human beings into monsters. Either intentionally or even with the best of intentions.

Thus the positive label and recommendation. “Come Play” balances giving the audience what they expect while bringing us the kind of story rarely seen within the horror genre, and is overall still relatively rare in media. For as said in an article on “The Mighty,” the opportunity to see people with autism as leads that aren’t savants, like Shaun on “The Good Doctor” or verbal and close to atypical, like Sam on “Atypical” is rare. So while Robertson isn’t known to be autistic, one would submit while it is unfortunate there is still a gap in opportunities for actors with autism, at the very least the story potential is being made. Larry is an entity of another world that moves about through electricity and can see into our world through screens. However, it seems he has to trigger people seeing his story to interact with them, and one could submit he pushes the story as a means to either note he isn’t scary or to warn people that, once someone’s friend, he is their’s to the end – and don’t you dare get in the way. This can be seen with Oliver as Larry tries to coax Oliver onto the other side a few times.

Mind you, despite how far Larry goes to get Oliver, at the end of the day, Larry isn’t just going to snatch Oliver and bring him to the other side. You have to willingly take Larry’s hand. Which, after Larry chokes Byron, who Oliver reconciles with, and he scares the hell out of Marty and Sarah, Oliver comes to the point of agreeing to go with Larry.

However, to atone for isolating Oliver by telling Byron’s mom the lie that Oliver didn’t want to be friends with Byron and yelling that she wished he was normal, Sarah takes Larry’s hand. Now, was Larry happy about this? No. But, it seems Larry wouldn’t stop till he brought someone to the other side, and with Sarah explaining she cares for Oliver as Larry does, he accepts this trade. Thus leading to Sarah looking like the corpse bride and being assumed missing.

Which leads you to wonder what happened to Oliver, right? Well, luckily, his dad gets out of the hospital after Larry caused him to get into an accident. Also, with Sarah gone, he steps up in the way she longed for him to do, and Oliver is able to do short sentences now. Like him noting his mom loves him.

And in case you’re wondering what happened with Sarah, well, as shown, Larry isn’t an evil figure, just a lonely one. So, on occasion, Sarah goes to visit and play with Oliver, and it seems Larry doesn’t impede or interfere at all.

Does “Come Play” Have Sequel Potential?

Technically yes, in the form of Oliver trying to get his mom back or trying to end Larry preying on people.