Wherever I Look
Recaps, Reviews, and So Much More
Home Movies Christopher Robin – Recap/ Review (with Spoilers)
Movies

The combination of modern technology with classic characters makes Christopher Robin feel like a true Disney classic vs. exploiting nostalgia.

Table of Contents show
1 Summary
1.1 Question(s) Left Unanswered
1.2 Collected Quote(s) or .Gifs
2 Miscellaneous Commentary
3 Highlights
3.1 It Tickles Your Funny Bone and Makes You Cry Like You Were Cutting Onions
3.2 The Animation and Technology
4 Overall: Positive (Worth Seeing) – Recommended [Movie]
5 Follow Wherever I Look on Twitter, Like us on Facebook and Subscribe to the YouTube Channel.
5.1 Check Out Other Movie Reviews

Everyone has to grow up eventually but there is a difference between growing up and automating your life. Which is the problem at hand for Christopher Robin. He used to play, have fun, both as a child and an adult, but eventually, he automated his life. Everything became about results and efficiency, even his child. Making it where, as his imagination slowly died, you are almost led to believe Winnie the Pooh and the rest were slowly disappearing. Yet, as Pooh found himself all alone, he wanders through the tree which separates the 100 Acre Woods from London and finds Christopher. A shock, as you can imagine, and one which is kind of not welcomed.

Why? Well, Pooh may not bounce about like Tigger but he becomes quite destructive and distracting when taken home. So, Christopher heads off to Sussex, to the tree where Pooh used to greet Christopher and due to guilt, Christopher agrees to help Pooh find his friends. However, while he agrees to cross over he brings the same attitude and it comes to a point where Pooh’s innocence and naivety don’t protect him from the new Christopher Robin. Leading Pooh to disappear as his friends.

Leaving you to wonder, will Christopher Robin lose not just his childhood friends, but maybe his wife Evelyn and daughter Madeline too? For while his work is appreciated, his presence and how fun he used to be is something they’d appreciate too.

“I always get to where I’m going by walking away from where I’ve been.”
— Winnie the Pooh

“Doing nothing often leads to the very best of something.”

Can anyone else imagine Bronte Carmichael is a remake of Matilda 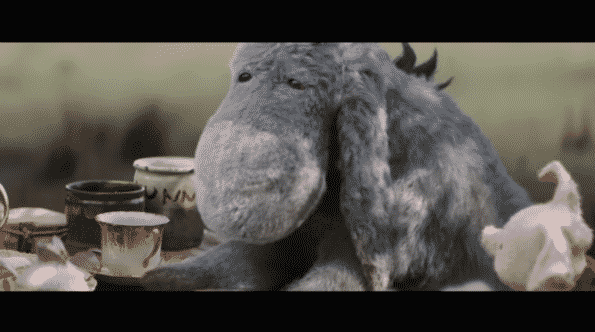 In the film, Christopher does eventually, one by one, find Eeyore, Piglet, Rabbit, Owl, Roo, and Kanga. But the one who you have to keep your eye on is Eeyore. His dry, kind of depressive, humor kills. I’m talking, whether you are a kid or adult, his one-liners will have you wanting to follow screenwriters Alex Ross Perry and Allison Schroeder just to see what else they could do. For whether Pooh’s innocence and naivety making it where he doesn’t fully interpret, correctly, what Christopher is saying or Eeyore… Oh, Eeyore. The way Eeyore interacts with Christopher from the jump, when he thinks he is a Heffalump, will have you laughing. Not chuckling, or simply smiling and thinking “That’s funny” I mean actually making the sound of laughter.

But, as much as you’ll laugh, you’ll also cry too. For with Christopher becoming the most depressing kind of adult, it reminds you of Inside/ Out

alongside the Inner Workings

short. The Christopher Robin we see has no time for family and fun and the way he treats Pooh! Oh my god, you’ll hate Christopher Robin and hope his wife does end up divorcing him. Because you can see his father putting him through boarding school set him on a path to think work is all that matters. Especially after starting a family because it seems that became Christopher’s sole purpose – being a provider and making sure Madeline could provide for herself.

Which is quite depressing and then you get hit with him dismissing and suffocating his childhood and it hits you right in your feelings. Yet, it also presents a valuable message. You can’t, or rather shouldn’t, let your inner child die. For once that dies, you begin dying inside too.

The Animation and Technology 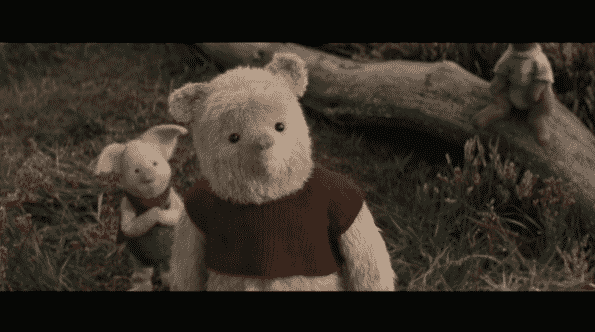 One of the things which has been lost thanks to the internet is a sense of wonder. With behind the scenes videos and a million and one theories, special effects get judged by how realistic they seem. As for Christopher Robin, because of how strong everything is in the movie, you just get lost in watching Pooh and the rest talk. Especially as they emote with their faces. I mean, if you didn’t know better, it would lead you to believe that little people were playing these characters vs. the best special effects Disney could buy.

When it comes to Disney making live action adaptions of all their properties, each one has felt like it was made to exploit nostalgia. There was never this sense that the story had to be modernized and take advantage of modern technology. Much less, they could remake the story with new actors or voices, and bring that magic back to the big screen. All the movies we’ve seen thus far just seemed like melodramatic takes on classics beefed up with CGI and star power for easy money.

When it comes to Christopher Robin, however, that trend gets bucked. There seems to be actual thought, true emotions, put into the writing and performances of this film. And while, yes, it gets deeper than what you may be used to, it also presents a surprising amount of comedy, primarily through Eeyore, that catches you off guard. Also, it is the sole film, I’d argue, Disney has remade or done a new adaption on that used just enough technology and didn’t go overboard.

Hence the positive label and this being recommended. From story to performance, tear-jerking moments to jokes from Eeyore and also Pooh, this film doesn’t use nostalgia as a crutch what so ever. It has enough merit on its own to not just be a hit, but a bona fide classic. The kind you show your children, your children show theirs, and then it gets likely gets remade and that former child shows them this instead of whatever new came out in theaters. For this is more than just a movie but something which feels like a memory you want to relive over and over.