Wherever I Look
Recaps, Reviews, and So Much More
Home Movies Bodied – Recap/ Review (with Spoilers)
Movies

While I won’t say Bodied is the best comedy of the year, it sure as hell is one of the most memorable in years.

Table of Contents show
1 Summary (Ending on 2nd Page)
1.1 Question(s) Left Unanswered
2 Highlights
2.1 The Bars
2.2 The Comedic Way Of Addressing Various -Isms, -Ist, Phobias, and Appropriation
2.3 Black Women Get A Voice
3 On The Fence
3.1 There May Come A Point Where You Realize You Barely Give A Damn About The Story, You Just Wanna Hear Bars
4 Overall: Positive (Worth Seeing) – Recommended | Purchase Or Rent On (Fandango)
5 Follow Wherever I Look on Twitter and Like us on Facebook.

It all began Adam just wanting to do his Master’s thesis on battle rapping and the use of the N-word. However, as he does his research, by just watching events with his girl Maya, he finds himself drawn into the action. First by hanging out with a battle rapper named Behn (real name Osiris), and then taking on this white boy. From there, Behn takes note of Adam, who is an English major by the way, and mentors him. Leading to Adam’s style being taken note of – but not just in the battle rap community.

On the flip side there is Maya and her pretentious friends who are so absorbed and who is critiquing someone’s exhibition of an -ism, an -ist, or some kind of phobia, they barely recognize what they say and do. To the point that, if they get called out, they overcompensate to make up for it. Leading to this hilarious journey of Adam going from observer to participant, while the movie addresses the idea of culture vultures, and somehow the two things not clashing as much as they compliment each other. 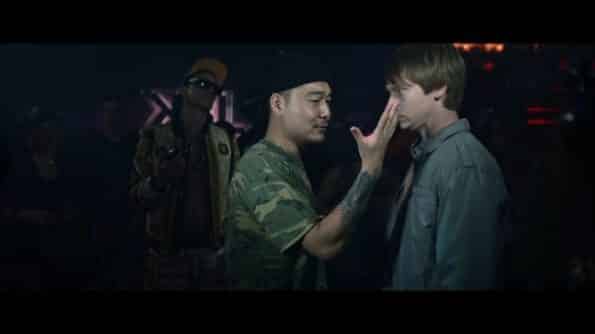 I should preface this by noting that the closest thing to battle rap I’ve seen is Wild N’ Out. Yet, the bars in this movie is like the best of when it comes to that show. Also, fun tidbit, Conceited has a small role in the movie. That aside, what we get out of Bodied is the kind of wordplay you don’t hear a lot in commercial rap music. Especially when it comes to the insults which will straight up have your jaw drop. Some of the things Aaron and Behn say may require you to analyze what was noted for a hot minute, but once you get it your eyes open up and mouth widen. For while some quips are quick and easy, others help you understand why a student would analyze the art form of rapping for their master’s thesis.

Though the word “Edutainment” is often associated with after-school specials and things of that nature, I must admit loved the various ways the film critiques it’s different archetypes. You have the “woke” white liberal who can turn anything into a dissertation, addressing the privilege white Americans see Asian Americans have and them being treated as model minorities, alongside addressing when and what doesn’t get called out. Like when one gay character refers to his inner Black woman.

It doesn’t end there though, two battle rappers, Prospek and Devine Write, go in on themselves using the jokes often used against them to help illustrate the racism and sexism they uniquely go through. But oh, Jas, Behn’s wife, takes the cake. She goes in on Adam when he visits their home and while she doesn’t say anything you never heard before, the way she says it brings new life to the text.

Giving you this epic view on different cultures of society, many who seem to want to mean well but who often fail in the attempt. Oh, and I should note, this includes debates about what is said in battle rapping as well. From the homophobia, the mention of shooting their opponent, the whole nine yards.

Black Women Get A Voice 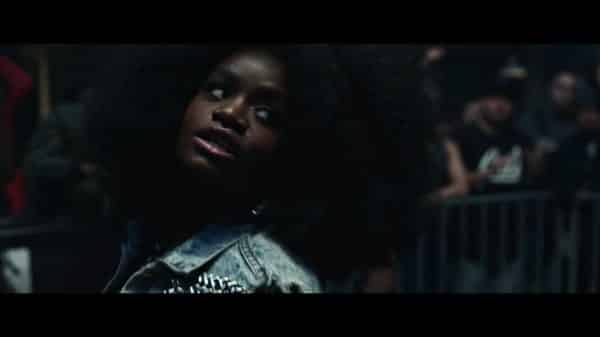 Between Devine Write and Jas, who are main two women who get to go in, alongside Dean Hampton for one scene, you feel blessed in so many ways. Just Dean Hampton noting how, after decades in education, men are still interrupting her, and she gets pissed! Oh, I fully expect memes and .gifs. Hell, I may make them.

But, as for the two women with a larger role? As noted in the 2nd highlight, you have to love how they get to both speak for themselves, the insults they deal with as women, as well as being Black. For while it is often talked about, the issue of Black women dealing with sexism and racism, their voice on such isn’t often heard. Especially by more than one and so eloquently. Well, eloquent for those who appreciate the passion behind curse words.

Making them have a voice and presence a bit of a shock, for a movie like this, but so welcomed.

There May Come A Point Where You Realize You Barely Give A Damn About The Story, You Just Wanna Hear Bars

Why are Adam and his dad so distant? Much less Adam and his mom? Not answered or gone into, but you’re fine with it. Why in the world is Adam with Maya who is pretentious and a bit of an ass? Don’t know and don’t care, except when he is trying to get back with her and you’re praying it doesn’t happen. Feelings like that, not ultimately caring about a character’s personal drama, begins with Adam and spreads to most. The only exception being Behn (Osiris) and Jas’ family because it pushes how rap is a safe outlet for his anger and allows him to reconnect to his interpretation of Blackness. Especially since he has to code switch during his day job.

Overall: Positive (Worth Seeing) – Recommended | Purchase Or Rent On (Fandango) 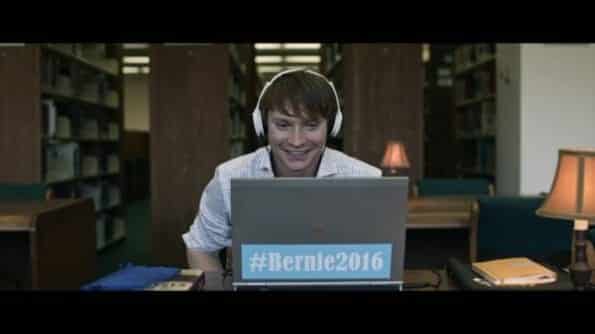 The bars in this film are the type I’d imagine people stealing for the jokes are too perfect to live and die within the film. For if you have any love for hip-hop, rap, or battle rap, you will be unable to deny whoever wrote these lines could be the greatest of all time. For they found a way to present the spirit of battle rapping with comedy in such a way that it honors both art forms to the max.

Hence the positive label and recommendation. Bodied may not have the best story for its characters, but the bars alone make it so you forgive the lack of development and some characters you just wish would get smacked with a shovel. If only because you laugh so hard, so consistently, and the film makes you think, that you figure if it was going to drop the ball somewhere, at least it did on something which, for this film, wasn’t something it had to heavily rely on.