Wherever I Look
Recaps, Reviews, and So Much More
Home Movies A Quiet Place – Recap/ Review (with Spoilers)
Movies

A Quiet Place is not your mainstream horror movie and with that comes plus and minuses depending on how you like your horror.

Table of Contents show
1 Summary
1.1 Other Noteworthy Facts & Moments
1.2 Question(s) Left Unanswered
2 Highlights
2.1 The Power of Near Silence
2.2 The Father/Daughter Relationship
3 Criticism
3.1 You Learn Almost Nothing About the Abbot Family or Life Before The Monsters
4 On The Fence
4.1 Major Events & The Ending
5 Overall: Mixed (Divisive)
6 Follow Wherever I Look on Twitter or Like us on Facebook.

These monsters, which we don’t learn the origin of, how much of the population they have wiped out or anything major, are blind creatures with superior hearing. Because of this, one family primarily uses sign language to communicate, with the occasional whisper, walk barefoot everywhere and have adjusted. Other families seemingly as well, they aren’t the last humans on Earth, but we only see like two other people and they don’t last long.

Leading to the heart of the story. As is a problem in zombie movies, for this movie the primary issue is how do you raise a child, from a baby, much less prep a child to survive on their own? Which is what Lee and Evelyn try to do, to the best of their abilities.

The Power of Near Silence As noted during a BUILD series interview, sound is a major element of the genre. Mostly in the form of haunting music to set up false or real jump scares. In this film though, most of the time the sound is just whispers and whoever you are in the theater with. Thus making things a little bit more eerie, but really makes you feel that, as much as this will probably be a hit in theaters, if you got a good surround sound system at home, it is going to be so much better.

Pretty much Regan is the main one who may draw your attention. Mostly for the fact she has some real kind of storyline. She has guilt, with her being deaf and everyone else hearing, she is treated differently, and also she is more aggressive, or willing to take initiative than her brother Marcus, but Lee favors him a bit. And it is the strained relationship between Regan and Lee that gives the film some kind of oomph. Some sort of storyline outside of how Evelyn is going to deal with giving birth to a baby in a world where monsters hear you, it means they will rip your intestines out. 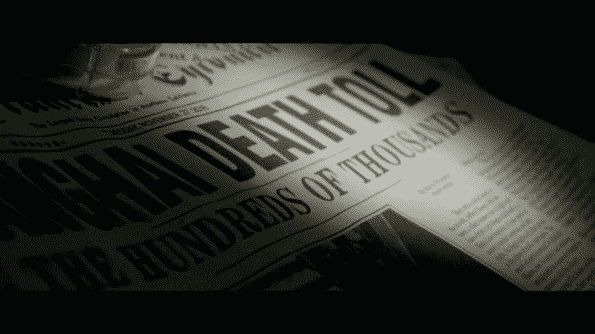 One could argue, when you just trying to survive, why in the hell would you be pushing to have conversations? Much less talk about the world your kids likely may never know. However, even with that said, what Lee and Evelyn did for a living was something I wondered, as well as how the rest of the world was doing? Much less, while we see a few news clippings, there is no sort of breakdown about how we came to the state we are introduced to. Whether the monsters came from experiments, were aliens, evolved from something or what. I mean, maybe I could have missed it, but I don’t think I did.

I’m gonna try to avoid spoilers when I say this: Some of the major moments in the film, because of us learning nothing about the Abbott family or the world they are in, don’t really hit as hard as they could. Then, when it comes to the ending, because the film was never really building toward it, its fine but kind of hunch worthy.

Mostly because, the first major event, on day 89, we don’t get to see the immediate effects of it. After the event, we jump to day 472 and Evelyn is pregnant. And while the event on day 82 is talked about and effects the family, there is always a certain amount of disconnect where you are given enough to feel something for the family, but not enough to feel truly invested.

You know, sometimes different doesn’t mean better and I, with hesitation, say that about A Quiet Place. For it isn’t a bad movie at all, but it comes off very indie in style. Like, there isn’t any pursuit of being commercial but itself. Something which you have to applaud and will admire, but some of the decisions it makes because that isn’t a factor may seem just a tad questionable in the long run.

Hence the mixed label for while likable, it is the type of film that seems like it will be better to watch at home, with a good sound system, than in a theater. Just because, utter silence is what will fuel the jump scares and you feeling a bit creeped out. Something you can’t get while people are walking back and forth, they’re eating, or explaining something to their movie buddy.