Wherever I Look
Recaps, Reviews, and So Much More
Home Movies A New York Christmas Wedding (2020) – Review/Summary (with Spoilers)
MoviesPositive (Worth Seeing)Recommended (Movies)

If you like holiday movies which get your emotional, feature a “What If?” and are a little queer, you will love A New York Christmas Wedding.

In early December 1999, Jennifer Ortiz reached a pivotal moment in her life. For some time now she has known she had feelings for her best friend, Gabrielle “Gabby,” but decided it was time to confess. But with Gabby being unavailable came a lot of things Jennifer said out of hurt, and within months, or a year, Gabrielle was gone.

Flash forward to 2019, and Jennifer is on her way to get married but is visited by her guardian angel, Azrael. Someone who gives her the chance to see what 2019 would have been like if Gabby lived. Thus throwing her life in a tailspin as she faces who she is, her truth, and trying to reconcile with the life she lost all because of one rash moment.

We feel welcome but not equal.
— Gabby 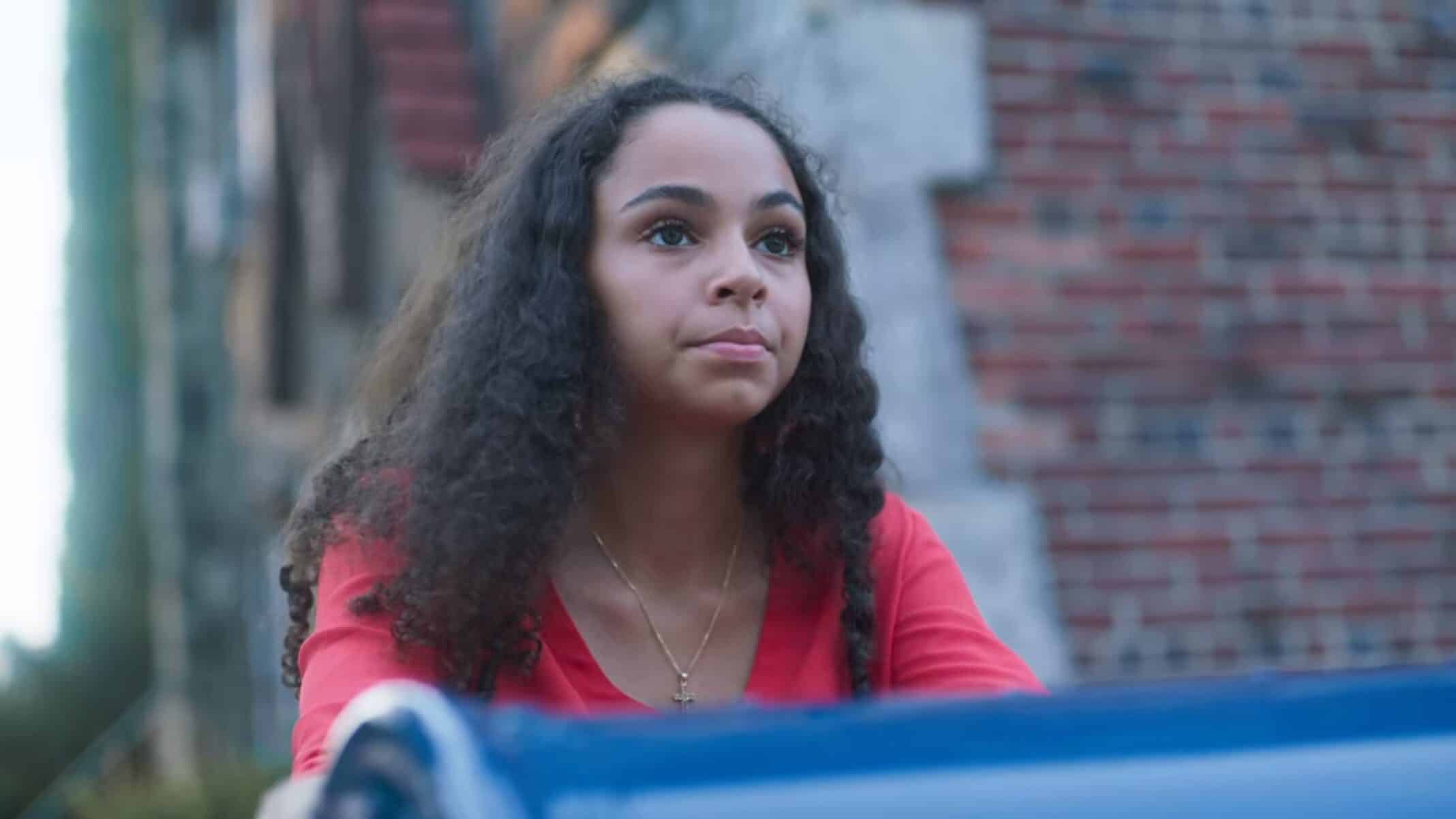 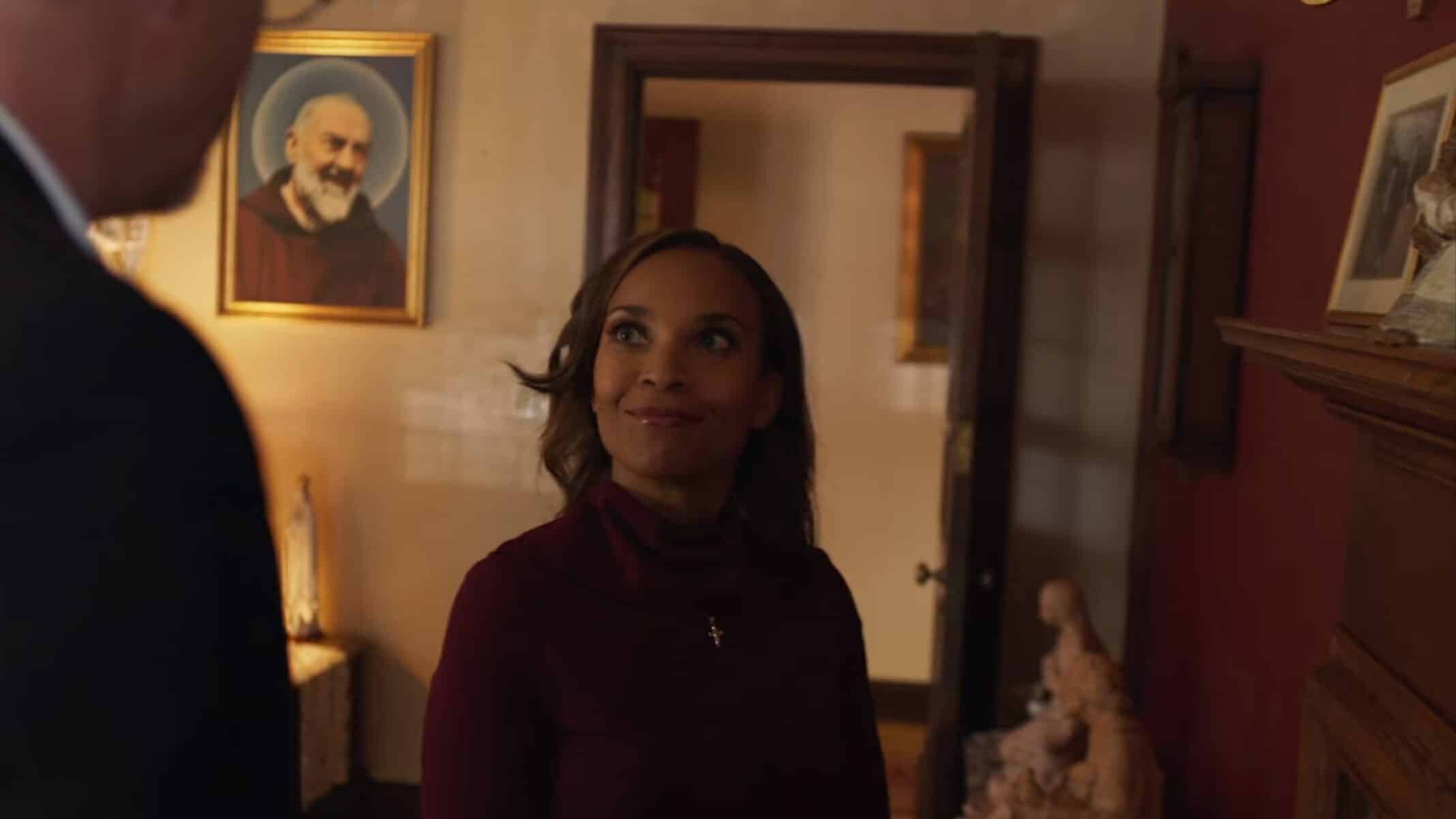 With her mother dying when she was 15, the people who have given her consistency, like her dad Miguel, and Gabrielle “Gabby,” have meant everything to her. So any interruption from that routine was jolting, and when Gabby couldn’t make it one day, she went off. Thus she lost a friend and ended up living a life that wasn’t fulfilling and, more often than not, is portrayed as Jennifer being on auto-pilot.

A devout Catholic, Gabrielle also was a bit of a Black sheep in her family. Yeah, her brother she was cool with, but her strict Italian parents? Not so much. Hence her complicated walk journey towards discovering who she was, often alone, but with some help from her church’s father, “Our Lady of Hope.” The place she would eventually be employed as choir director.

A flamboyant angel who grants Jennifer a Christmas wish she didn’t explicitly ask for.

Jennifer’s fiancé in her original 2019 storyline who is rich but a Mother’s boy.

How It Handles Jennifer’s Journey [92]

The way Abit paints Jennifer’s journey is something you can easily overcomplicate yet also feel that simplifying it doesn’t do it justice. For there is something about the idea of showing this, assumingly, a bi-sexual woman who has a good man and, outside of a few things, is happy for him, yet still having her long for a relationship that never happened with a woman. And I think why that hits so hard for us is you don’t usually get to see bi-sexual stories like this.

When it comes to Jennifer, you aren’t necessarily given the idea she is ashamed of her homosexual feelings. It’s just Gabby set the bar so high that it seems being with another woman just wouldn’t compare – at least that’s our take. So when you see her get to experience two days with Gabby and have differences with her, as she does David, but over different things, you see respect given to both Jennifer and the person she is with.

Making it so, while you aren’t given much reason to invest in Jennifer’s relationship with David, it helps you appreciate how true the term “Love is Love” is and the struggles it is to not only find the courage in oneself to seek love but the effort required to keep it.

You have to appreciate that David wasn’t really written in a way to be more than a nice guy. He wasn’t this dude you are supposed to feel sorry for or who makes Jennifer seem like a bad person. He is around long enough to be established but not get invested in. This allows him to set up Jennifer’s sexuality and help establish that Jennifer doesn’t advocate for herself when it matters. 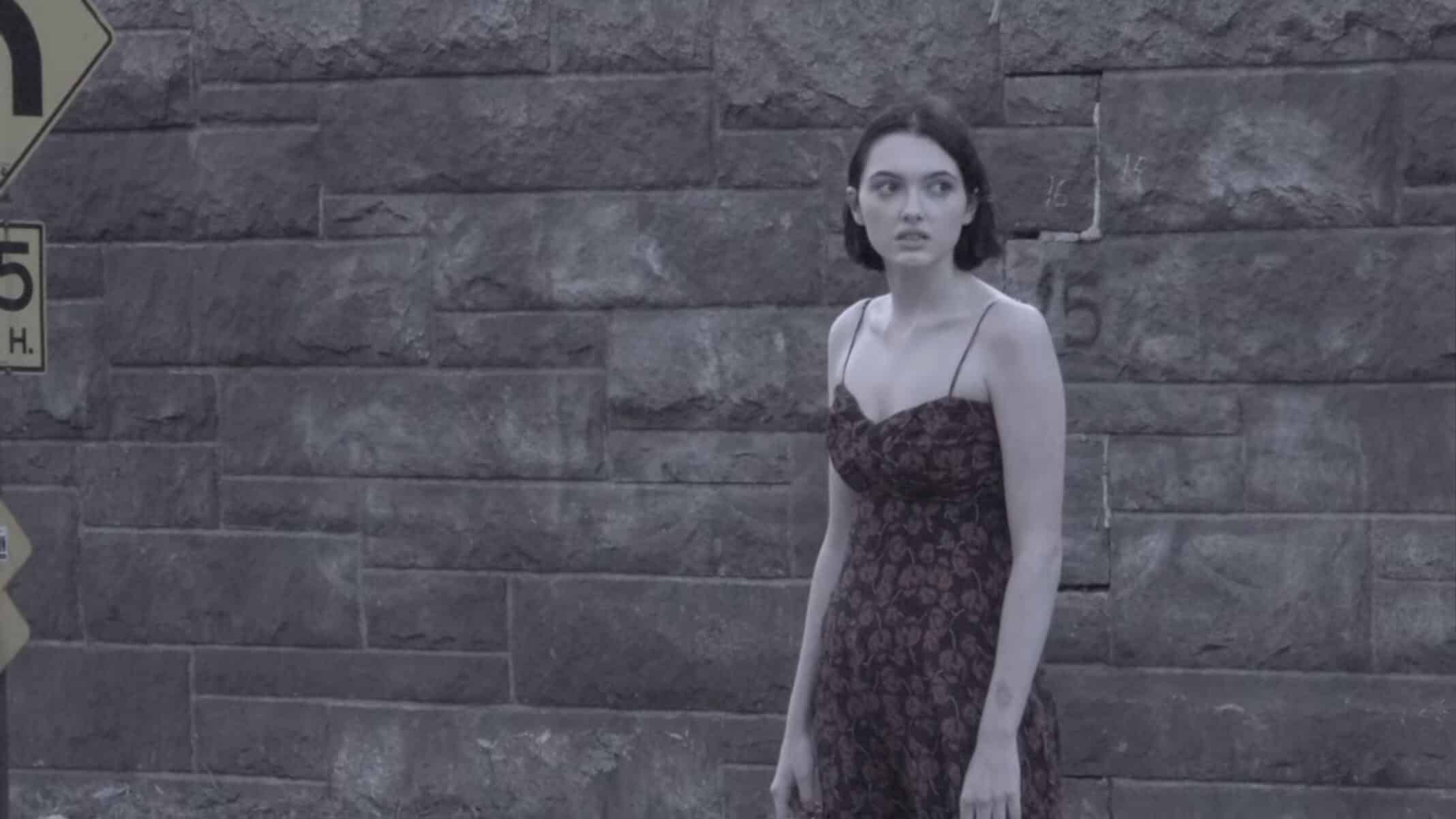 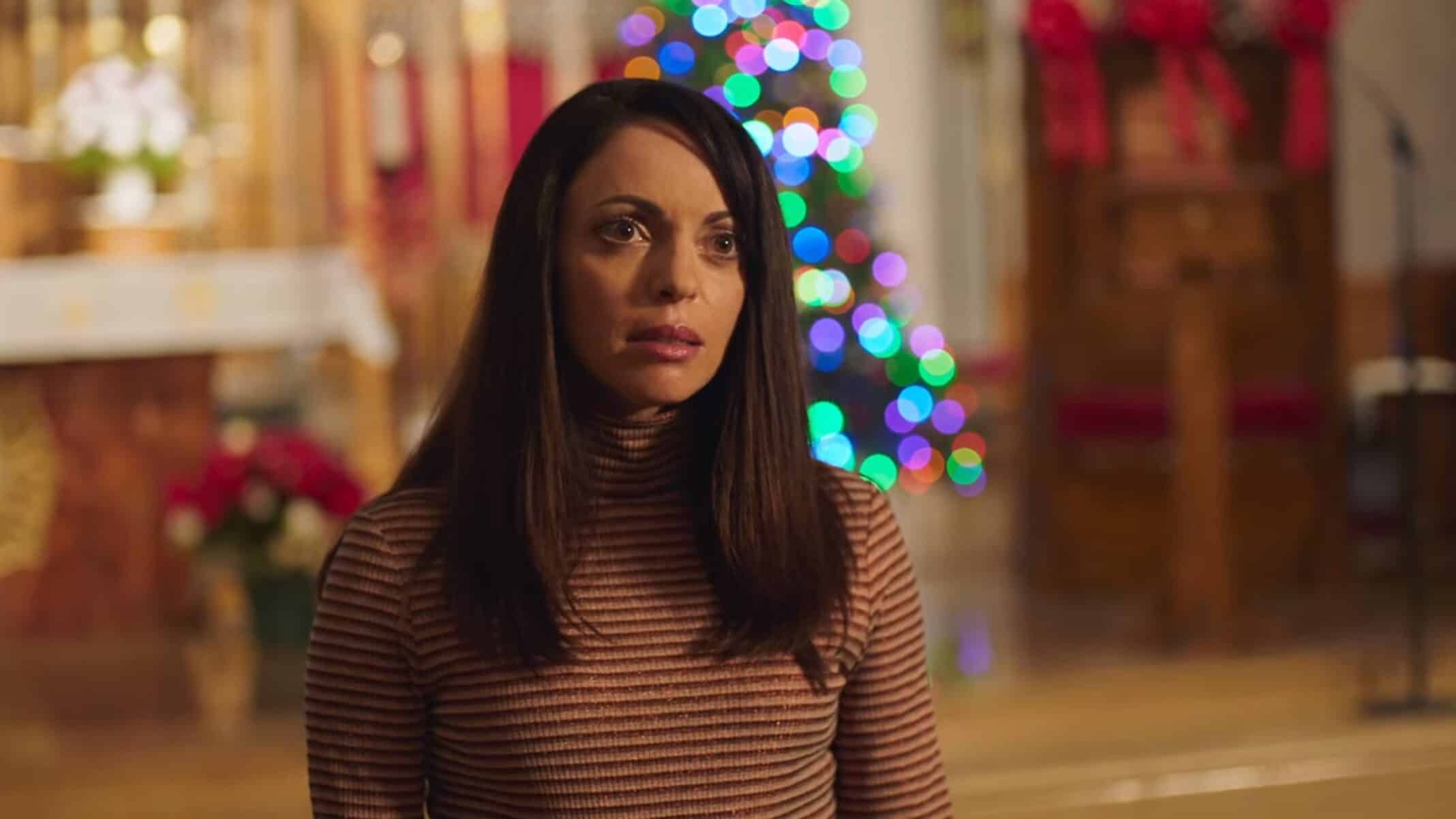 One of the benefits of Gabby’s part in the movie, aside from her relationship with Jennifer, is that she is a devoted Catholic wrestling with a faith that is very conservative. So between what happened to Azrael, which is almost painted as an abortion, to her wanting to be married in the church she was raised in, you get a beautiful, individualized story.

For as you see Gabby confront her priest of over 20 years and take note of her story, it reminds you of how much faith, church, and the community both bring, have such a strong place in people’s lives. Especially when forsaken by the family they were born into, and there are very few options if your blood rejects you.

At first, Azrael seems like a full-on gay stereotype, especially since he says “Girl” so much you could make it into a drinking game. However, as the character is allowed to talk like a normal person and not seem like a comic relief, you see how Azrael is an asset. For beyond being magical, in their own way, they add to the emotional oomph of the last half hour of the movie. Which delivers multiple teary-eyed moment. 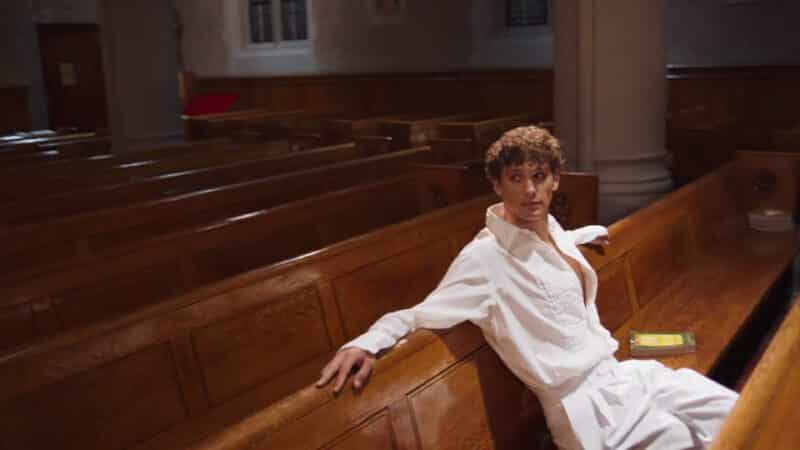 How It Handles Jennifer's Journey - 92%

A New York Christmas Wedding is surprisingly good in both presenting a relationship you deeply wish to invest in and a story about a, again assumingly, bi-sexual woman, and presenting the understanding that love is immensely complicated. Yet, we all seek it despite the compromises, the fights, the past we have to reconcile with, and the knowledge that, in one phone conversation, one letter, we can end something which could be so wonderful for us yet, due to stubbornness, we ruined it.

So, Azrael, who is Jennifer’s guardian angel, also happens to be Gabby’s child, who was stillborn at 29 weeks. Yet, that isn’t revealed until after Jennifer gets Christmas Eve and Christmas Day to be with Gabby in an alternate 2019 in which Gabby is still alive, alongside Jennifer’s father, Miguel. In that world, Jennifer gets to be with Gabby and play out the life they could have had. Which after some adjustments, she realizes she loves being in.

However, while Azrael could provide a preview, making it permanent requires a sacrifice. One, being Jennifer’s relationship with David, who she does love. But the second is Azrael’s existence. For if Jennifer didn’t say what she did to Gabby when she did, she would have never have gotten pregnant with Azrael. Also, due to his death, alongside feeling isolated and alone,  Gabby wouldn’t have walked into traffic and be killed in a car accident.

Yet, despite growing fond of David and Azrael, Jennifer chooses being with Gabby and having her father back. Thus she gets to live happily ever after in her ideal timeline. One in which we don’t get to know what it is she does for a living but do know she is happily married to Gabby.

Does A New York Christmas Wedding Have Sequel Potential? 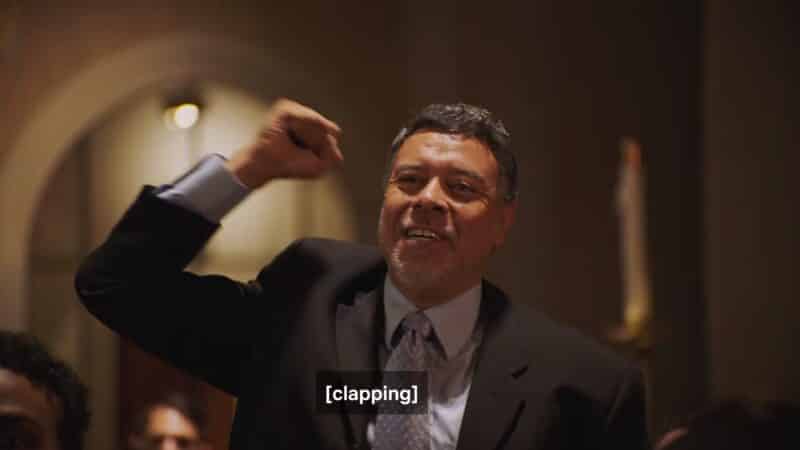 Outside of transforming into a film that becomes a series of Jennifer trying to change this or that to save her mother, Gabby, or father, then no.