By AmariApril 22, 2019 Chapter By Chapter Review 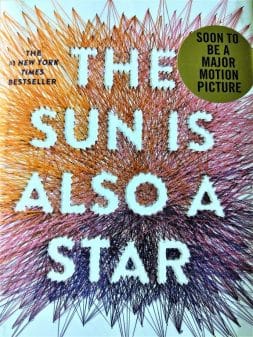 Natasha finds herself stalked by Daniel, yeah it’s one of those books, but he might just be growing on her.

Natasha is in Second Coming Records, a safe haven of sorts for her. There she can find all the 90s grunge music she loves and take in the smell of dust and lemon scented air freshener. Also, she can find Rob making out with Kelly, and Kelly stealing records. What a great day right? Likely to get deported, you see your ex with the girl he cheated on you with, and she is a thief.

This display is shared with Daniel who decides to add commentary, and since Natasha is just, in a weird place, she goes along with Daniel snooping in. Also, she is kind of glad he makes a stink of Kelly stealing and gets to share seeing Rob scoot out in shame – leaving Kelly to look like she was on her own in stealing.

Yet, with them starting to chat, Daniel decides to extend the conversation. But with Natasha on the move, outside of learning who Rob and Kelly were, and shaking her hand, it seems like things were over before they began. At least until a man, Donald Christiansen, nearly ran her over with his BMW. Daniel saves her from this and uses the opportunity to get coffee. Leading to a lot of awkwardness between them since Natasha has somewhere to be, and kind of feels obligated, and Daniel isn’t that much of a smooth operator. He has only had one girlfriend previously.

How To, Scientifically, Fall In Love: Natasha, Daniel

However, a handful of ways to describe Daniel would be optimistic, persistent, and a hopeless romantic. So with ideas of half Korean and Black babies dancing in his head, he works his charm. It begins with her noticing his poetry book and then goes into the debate of him basing decisions on emotions and her practical. Thus letting them both realize they are opposites but due to physical attraction, and the X factor, it slowly becomes more.

However, with deportation on the horizon, it makes Natasha be clear with Daniel that she isn’t one to fall in love with. She doesn’t give the reasons, and that might be why Daniel’s goal holds steady as they head to her appointment. Finding themselves quickly growing intimate in ways which are uncomfortable yet not straying too far from the New York Times article which makes it seem like falling in love is a science.

That’s the thing that makes me wary. Where did all those feelings go? People spend their whole lives looking for love. Poems and songs and entire novels are written about it. But how can you trust something that can end as suddenly as it begins?
— Natasha (Page 58 – Hardcover)

He was some exotic planet, and I was his favorite satellite. But he’s no planet, just the final fading light of an already dead star. And I’m not a satellite. I’m space junk, hurtling as far as I can away from him.
— Natasha (Page 65 – Hardcover)

As our eyes meet, I get a kind of déjà vu, but instead of feeling like I’m repeating something in the past, it feels like I’m experiencing something that will happen in my future. […] It’s like knowing all the words to a song but still finding them beautiful and surprising.
— Daniel (Page 66 – Hardcover)

There’s a Japanese phrase that I like: koi no yokan. It doesn’t mean love at first sight. It’s closer to love at second sight. It’s the feeling when you meet someone that you’re going to fall in love with them. Maybe you don’t love them right away, but it’s inevitable that you will.
— Daniel (Page 74 – Hardcover)

A Different Kind Of Love Story

Many, though not all, love stories do feature a girl who wasn’t looking for a boyfriend, honestly didn’t have the time, yet still fell for one. Yet, things are different here. Daniel is your usual charming stalker, but Natasha’s situation and response to him aren’t something you can easily say are like this person or that person. With her wit and sarcasm, as well as her love for science, especially over stuff which can only be explained with feeling, she feels unique. Not “different” in the form of, “I’m quirky because I trip a lot and am not your average girl.” Instead, Natasha is Natasha and doesn’t feel rooted in the familiar with some cosmetic changes. She is a whole ass person who is complicated, conflicted, and who doesn’t always make sense.

Thus making the idea of Daniel trying to win her over beautiful. Since she clearly doesn’t need him so for her to fall for him would mean she wants him. Yet, how do you make someone who bases their decisions on rationality, what’s practical, fall in love? An emotion she thinks is fleeting and doesn’t necessarily enjoy the idea of.

What seems to be a consistent challenge in YA novels is how do two people meet randomly and connect? Also, how to not make the guy seem like a stalker? That issue persists in The Sun Is Also A Star, and while Daniel recognizes he is stalking, also that Natasha really doesn’t have the time, there is always some method used to help you forget the issue. In the book, it is him saving her from being hit by a car but even with that comes a sense of obligation. For with him saving her from being hit, that means his request for coffee she is obliged to do.

Now, granted, things progress from there, and the creep factor fades away. However, taking note he comes with her to this appointment she has, one which could decide if she stays or leaves the US, it never truly dissipates. So unless you get lost in her kind of liking him, but having more important things on her mind, combined with his persistence and being love-struck, you may feel slightly uncomfortable.