While Jeff Dunham’s stereotypical puppets are losing their edge, Walter and Peanut help show Jeff still has it.

Jeff Dunham, after discovering his genealogy traces, in majority, to Ireland, has decided to visit the country. While there, he heads to the stage to listen to his cast of puppets, Walter, Baby Seamus (a new puppet), Bubba J, Achmed, and Peanut, ridicule him for about an hour. The topics? Well, the fact Jeff’s wife is 18 years younger than him. The idea of this 55-year-old man with new twin boys and of course there is just a touch of political jokes and social commentary in there. When it comes to the political jokes though, they are more so aimed at Bill and Hillary than Trump.

But, Jeff takes in all in stride for, at the end of the set, he isn’t the one who goes in the suitcase. The opener and closer are the best part of the special. Walter opens up and pretty much sets the tone that Jeff is going to be ripped a new one. Especially with him presenting abandonment jokes, dealing with Jeff’s parents giving him up, and also making fun of him for having a wife 18 years his junior. Walter’s set alone presents nearly 1/3 of all the funny moments of the special.

But then there is Peanut. After three lackluster puppet sets, noted below, Peanut gives the special a strong finish. Mostly because he takes what Walter was poking at and pretty much stabs Jeff like Chucky, from Child’s Play, in a… Peanut suit. I mean, the jokes dealing with him and his kids were kind of brutal. As if, Walter was just picking up on insecurities that he maybe could share with Jeff but Peanut was that bastard who loves messing with you and also taking it too far.

I mean, for those who watch the special, prep yourself whenever you see Peanut lean into the mic. Those low groaning whispers are the cruelest and funniest things of the special. Making it seem like Peanut is the darkest most thoughts Jeff can come up with or he represents all the things Dunham may have ever heard about his situation online. It’s just now they are turned into jokes for our entertainment.

As can be seen in all of his specials, Jeff is the straight man in comparison to all his zany puppets. But, at this point, they have become a family. After all, Jeff has been doing ventriloquism since he was a child and has been so good at it paid his way through college. Also, it surely is paying his two older daughters’ tuition right now. But what I enjoy the most is we got to meet his wife and his twin boys. Thus allowing a bit more background for us as the special gets self-deprecating.

For between his own fears of being that old Dad who perhaps can’t play with his children as he wants, to dealing with his parents giving him up, he finds comedy in that. Some of it is very harsh, especially since, as noted, Peanut and Walter really go in on him. However, there is a sort, “Laugh at my Pain” kind of vibe to it.

The Stereotypical Dolls Are Getting Old 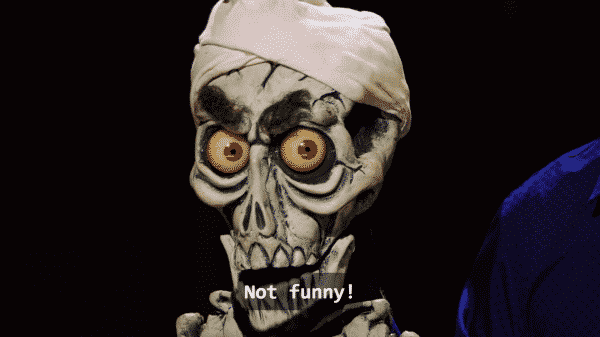 Achmed, Bubba J, and this new one Seamus, they’re still funny. However, they aren’t as funny as they once were. Achmed saying “SILENCE! I kill you!” has lost its edge. Him being this sensitive guy who was an idiot terrorist isn’t that funny anymore. The edge of having a terrorist puppet is gone and even with terrorism and bombings still being a sort of consistent news feature, Jeff doesn’t seem to know how to find jokes Achmed can do with that. He tries by saying Achmed wouldn’t join Isis, instead he was part of Tali-BOOM (or bomb) but that wasn’t funny.

Then with Bubba J and Seamus, it just really comes to the point where you have to ask how funny can a stereotype be? Especially old ones like Bubba J who Dunham has used to lampoon southern US culture for about a decade now? Then, as for Seamus, not to imply with this topic that I’m being overly sensitive, but it does feel weird to play up Irish stereotypes to a predominately Irish audience. Making it perhaps the audacity that is funnier than a baby who makes jokes about drinking, helping Dunham talk about his abandonment issues, from being adopted, and of course breasts.

But I think the main problem is Jeff isn’t a strong political comedian or social commenter. Both genres he is weak in. So while his overall talent doesn’t make it so you want to tell him to stop trying to get better, when you compare his stereotypical characters to Walter or Peanut, there is a chasm. After all, Peanut I think represents the twisted dark side of Jeff. Then, with Walter, while once a caricature of the older population, with time it seems Jeff is realizing he is becoming Walter. If not at least able to relate to him more. Hence the skit in which it is hinted Walter might be his dad. He sees himself becoming similar to this puppet character he made up.

And that lack of connection to Bubba J, Achmed, and the rest is what keeps those characters from remaining fresh and funny. Since, at this point, it seems Jeff brings them out because the audience loves them. Something which is shown by him repeating Achmed’s catchphrase repeatedly to the point it weakens it. If not is Dunham’s means of showing his frustration with the character who is such a hit.

Making jokes about Trump has become like making jokes about Michael Jackson or R. Kelly when it comes to being an alleged pedophile. Pretty much everyone does it and while you may hear a funny new one every once in awhile, largely it is the same joke over and over. So with Jeff just talking about the fence, and how that would effect José Jalapeno, who sadly isn’t part of this set, it was nice that joke was one of the few dealing with Trump.

However, when it came to Bill and Hillary, it just went on and on. Which was funny, at first, in terms of the bad thing about Hillary losing is now Bill has to see her every day. But, once Jeff started to do throwback jokes dealing with the Monica Lewinsky scandal, it started to push the idea that Jeff needs to just leave political jokes to a minimum. Especially if he has to pull out a joke 20 something years old.

The special is sort of an upside down bell curve. It starts high with Walter, kind of hits a valley as we get knee deep into the stereotypical puppets, but then Peanut cleans up the mess left for him. And let me state, the strength of the Peanut and Walter’s set are the main reasons this is labeled positive rather than mixed. For while the three middle puppets will get some laughs out of you, after a certain point it is like Jeff only has these characters because he knows the people love them or will love. Not necessarily because he enjoys making jokes for their characters anymore.