Some of the greatest comedians from the original Def Comedy Jam hit the stage, but mostly to read off prompters and introduce clips and others. Leaving only a handful of moments where you understand how this show became a hit.

It all began in July 1992. Hip-Hop mogul Russell Simmons, alongside Sandy Wernick and Bob Sumner, crafted a stage meant to help jumpstart African-American comedians. For just as Simmons did for Hip-Hop, he wanted to provide a platform to take these underground legends and bring them to the mainstream. Which of course led to the greats like Dave Chappelle, Chris Tucker [note]He didn’t attend nor send a video in.[note], Katt Williams, Kevin Hart, and many more.

All of which pay tribute to what Simmons and Def Comedy Jam did for them. Alongside the comedians who, just by being bold enough to grace the stage, maybe put them onto the game, became mentors. If not saviors depending on who you ask.

Sometimes when you’re expressing the thoughts of the minority, you run the risk of being rejected by the majority, but that rejection should not be the reason you stop. It should be an inspiration for you to continue.
– D.L. Hughley

[…] freedom of speech means you say what you want, and you’re willing to deal with the consequences.
– D.L. Hughley

Just to show you the importance of Def Comedy Jam, alongside other 90s shows featuring Black comics like In Living Color (which came before Def Comedy Jam) and Comic View (which came after), think of how many of their comedians are featured on TV today. But, focusing on Def Comedy Jam specifically, just looking at the picture above of the many whose careers were launched, there you’ll find a good portion of the sitcoms that filled the airwaves of the late 90s and early 00s. What other show can say they really made that many millionaires, or at least took people out of poverty, within the span of five years? Non-counting HBO’s revival, or special, that came out a few years ago.

But what is also important about Def Comedy Jam, which is seen in this special, is how it created a network. Something Tiffany Haddish mentions in her special She Ready: From The Hood to Hollywood. For if it isn’t Tracy Morgan noting how Martin Lawrence pushed for him to get onto Def Jam there is this comradery you see. Like, just to show the international significance, Trevor Noah notes that before Def Comedy Jam, in South Africa, there was pretty much Eddie Murphy and that’s it. Yet, after apartheid began to be dismantled, then came Def Comedy Jam. With that, he got to see vulgarity and different kinds of Black struggles and was able to connect, across the Atlantic, his long-lost cousins.

Even for women! There aren’t a whole lot featured, well aside from Sheryl Underwood, Adele Givens and Tiffany Haddish, but throughout the clips we see many women grace the state. Mo’Nique, Sommore, Laura Hayes (who was in the theater but I guess didn’t want to participate much in the festivities) and quite a few others. There is even a small segment dedicated to them. Showing that as many men there were who had their careers launched, the women didn’t do too bad themselves. Of course, many didn’t seem to ever crossover into the scripted world but, who knows, maybe they decided that lane wasn’t for them.

The Moments Which Seemed Off Script When it comes to many comedians, they are at their best when there isn’t a teleprompter or script. Mike Epps and Joe Torry’s time on stage showed that as they cracked on members in the audience. Such as women with no body wearing bodysuits and looking like wrestlers. Alongside them, Eddie Griffin doing a current Michael Jackson (meaning, being dead), was also a highlight.

However, it was Dave Chappelle and D.L. Hughley together on stage, as Dave did whatever it took to avoid reading the teleprompter, which was the best moment of the special. Then, only then, did you get the sense this special wouldn’t just be a parade of familiar faces and clips. They actually showed that, even all these years later, they still got it.

You’d think with the top talent of Def Comedy Jam, even if they are paying tribute to the show which put them on, and are reading off Teleprompters, this would be hilarious. Sadly, it isn’t. Most comedians stick to that teleprompter like their lives depend on it and as you listen to them, it is clear that whoever wrote some of the jokes, they’d never end up on Def Comedy Jam. And while certain comedians make up for the majority, like Dave Chappelle, a moment from Eddie Griffin, Tiffany Haddish, and etc., as noted above, you’ll mostly find yourself just sitting there watching clips kind of bored. Especially because it isn’t like they are showing anything that hasn’t been circulating on YouTube for years now.

But what makes things kind of sad is that for some, like Adele Givens, one of the few actually given a set during the special, she doesn’t hit it out of the park. She is comical but doesn’t give you that hearty laugh all these clips of her make you think you are going to get. And that is unfortunately true for the majority of the all-stars who get put back on stage repeatedly. You recognize they are legends due to longevity, but very few really push the idea that they still got it.

For like many 80s/90s rappers and R&B artists, you get the vibe that while they were good for the era they came up in, their style doesn’t translate well into modern times. There is this sense they are comfortable in what they do, how they do it, and with that, they feel no reason to try anymore. They made it, found their audience, so there is no longer a need to seek out people they haven’t already won over. 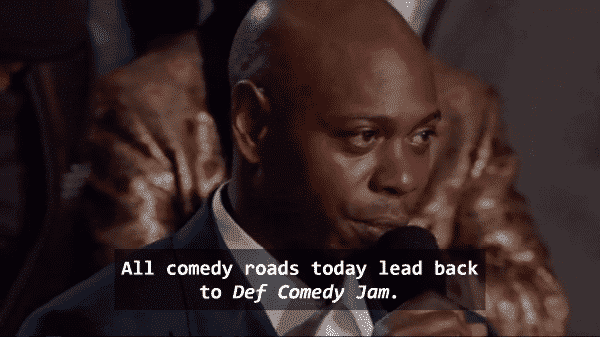 While only a handful of comedians actually reminded you why Bob Sumner scouted and put them on stage, for the rest, you can’t really fault them too hard. After all, they are reading off a teleprompter and it seems whoever wrote this show doesn’t know how to write for these people. However, considering how Dave and a few others seemed to deal with that teleprompter when they were ready to, that excuse weakens. Making it so, while many don’t remind you of why you better put respect on their name, the clips that were shown do sometimes compensate. Making it so, Def Comedy Jam 25 acts a quick history lesson about what the program was and its importance. For on top of two Black men launching dozens of careers, making some millionaires in the process, what they also did was foster a community. One in which we have seen how these comedians, once they started gaining traction, looked out for one another and really bolstered the idea that one hand helps the other. That is, versus this concept of Black people being like crabs in the barrel. For whether it was Martin Lawrence putting on Tracy Morgan or Tracy Morgan now having Tiffany Haddish on his new show, The Last O.G., you see how each star opens the door for the next and how it all started with shows like Def Comedy Jam.

Meanwhile 800 dead in Chicago. Latest a 6yo boy and a 22yo nursing student got paralysed. Great culture!!!

who asked you, moron?