With book writer Jay Asher not involved in [tooltips keyword=’season 2′ content = ‘Due to sexual misconduct allegations’] 13 Reasons Why enters a new stage. One which seems ready to make Hannah less of a victim.

Got A Secret: Tony, Tyler, Olivia

With the school wanting an NDA on Hannah’s death, and already making it a subject you can get suspended for, it makes the possibility of talking about it difficult. But, with Olivia pushing forward with a trial, it also puts all the kids on the tapes, or involved with someone on the tapes, on edge. For some like Tony, it is because there is more to their involvement with Hannah than we seemingly knew and for those like Tyler? Well, they expand on their story.

Such as Tyler being one of the first to probably speak to Hannah and he actually did, at one time, have permission to shoot her picture. Even came out with some good ones. However, then the Justin thing happened, Clay got involved, and so Tyler became a creep. The kind who, seemingly, because he knew that he likely wouldn’t get the girl, decided to become a weird ass****.

Though, as the trial begins, the point Sonya, the school lawyer pushes, is there blame to go around. Be it blame for what Hannah opened herself up to, as well as Tyler opened himself up to. But, being that Tyler doesn’t necessarily want to be a villain, on record, he makes sure to drop Clay’s name and there might have been others.

This is going to be interesting. The goal of season 1 was to show how everyone had a bit of responsibility when it came to Hannah’s death and it seems season 2 may deal with personal responsibility. That Hannah doing certain things invited certain reactions. Same goes for Tyler. Because he decided to be jealous or envious, and a creep, hence why Clay did what he did. Alongside the life Tyler currently has.

Making you wonder, with him not getting a sense of being understood in court, taunted in his dark room, and Bryce looming over him, will that school shooter thing remain dead? Granted, as seen by the copious amounts of disclaimers, and considering today’s climate, I doubt Netflix would go in that direction. However, Netflix has largely operated under this guise of letting creators succeed and fail with not a huge amount of network intervention.

Plus, when it comes to Netflix, curiosity is a driving force behind their business model. What is that show about, this movie? I get a trial? Okay, let me just put in some digits and check things out. Then you are hook and they make money.

So, long story short, with this shift from victim to holding responsibility in the situation, and Netflix pushing this disclaimer to cover themselves from negative PR, it should be interesting to see where this goes.

Can You Keep It: Jessica, Alex, Bryce, Mr. Porter

It has been 5 months since Hannah’s suicide and after Alex shooting herself in the head and what Jessica went through, both took off from school. Also, they decide to return the same day and it’s kind of hell for both. For Alex, being that his attempt didn’t lead to the intended result, he lost a month of memory, so what happened on the tapes isn’t remember, he has to use a cane and learns he is a taboo subject. Then, in terms of Jessica, with her just going POOF, Justin as well, the rumor of Bryce raping her got into his hands. He was able to craft the story to make it seem like a hook up she regrets for she ended up getting caught cheating. Something he pushes by interacting with her like nothing is wrong.

Which, considering Mr. Porter is feeling quite guilty about Hannah, he goes beyond to try and make sure Jessica isn’t pushed to the same fate. I’m talking even roughout up Bryce in the boy’s bathroom and speaking on mutually assured destruction. Though, considering someone is harassing Jessica just like Tyler, Mr. Porter may have something bigger to worry about. 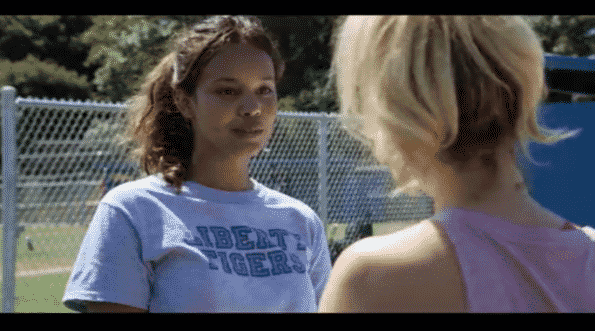 It’s so real and kind of twisted the way this show is. The darkness of teenagers who truly do not give a damn is in full display and while it can seem a bit soapy, it is rooted in realism. Even the whole Mr. Porter thing. For as much as you may think, “No school staff would do that” let’s not forget school staff members have done a lot to students that has gotten exposed since sites like YouTube and Facebook have been popular. Beyond having sexual relations with students.

But I must admit it was quite curious to learn Justin is not back. Stills from promotion of the show indicate he will pop up at some point but considering his living situation was inconsistent, it’ll be interesting to find out how he has been sustaining for these past few months.

Oh, and also, though probably an odd thing to say, I do wonder if Mr. Porter is going extra hard for Jessica not just because of Hannah, but because she’s Black. Which I know, some may ask, “Why bring race into it?” But it is an interesting thought. With it now being a Black girl who could die, there is one less degree of separation here. For while Jessica doesn’t look much like Mr. Porter, being that, depending on the spouse, they could look just like Jessica, it does make it become just a little bit more personal.

Pray This One You’ll Save: Clay, Skye, Hannah

At this point, Clay and Skye are full-on dating but there is a need to question why? If only because Clay clearly is dealing with PTSD and also there is something about his relationship with Skye that seems off. Sort of like he is dating her to save her than necessarily be with her. Scars and all.

Which, to a point, Skye might be picking up a bit. For with Clay seemingly unable to deal with some of her scars, alongside the fact she is cutting again, it is starting to make her feel a bit insecure. Though, with Hannah popping up and talking, as well as a Polaroid picture showing up that makes it clear Hannah wasn’t the only one Bryce raped, it seems Clay maybe out of Skye’s hair soon. For better or worse.

So we’re going from tapes to polaroids of which one might have been given Scott. Someone who, like Zach, maybe kind of chummy with Bryce, but seemingly just for college scholarship opportunities. Which, in itself, is kind of interesting isn’t it? Protecting someone just because outing and exposing them would negatively affect your chances for a better life or college. Yet, the sports world has largely shown itself to be trash. Hence why there are so many cases of abusive men in there who get paid well despite what they do in their personal life.

Well, that is outside of if you go beyond what is acceptable. Like, you can’t murder your wife or harm a dog, but beating her and being a terrible person? As long as you get those touchdowns and points on the board, seemingly owners look the other way and your teammates, as long as they are on a winning team, they aren’t saying a damn thing. No matter how much guilt by association they feel or experience.

Oh, and before I forget, Clay has to be spoken about. For one, the boy needs therapy – clearly. For his PTSD is causing him to see Hannah in very unhealthy ways and honestly, he is slowly but surely turning more and more into a butt hole. I mean, I get it, the guilt weighs on him heavy but I think he is slowly morphing into what he is trying to fight. Not in terms of becoming a rapist, but a bully.

Like, in terms of Tyler, very much a creep and a noted factor in Hannah’s suicide. However, Clay has a certain horse with blinders mindset that I don’t think allows him to understand, he is making Tyler’s life a living hell. To the point that, similar to Bryce, he is bullying Tyler. And mind you, I’m not saying Tyler should get off scot-free and be skipping in a field of grass. It’s just, Clay is in a place which makes him the worse to judge someone.

Leading to the Skye situation. Considering the way she was talked about in season one, mixed with Clay’s guilt, is it wrong to think he is dating her solely so she doesn’t hurt herself? That because they just stopped being friends suddenly, he feels guilty about that and doesn’t want to add to the burden of his cross?