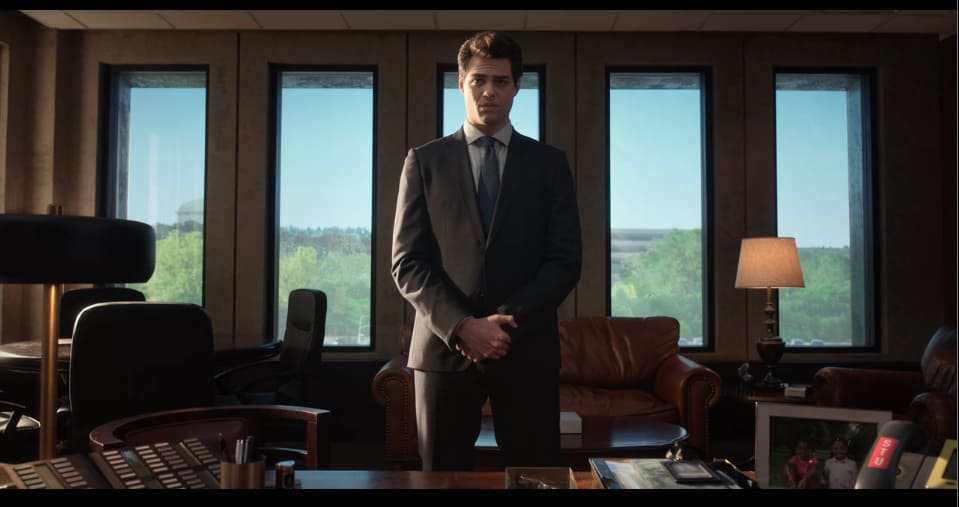 The first week of a new job for anyone can be rough as you adjust to the people and expectations. But for Owen, who just started in the C.I.A., within days, he gets tortured.

Look At Us, Working For The Government – Owen, Hannah, Terrence

Owen, alongside ex-girlfriend and roommate Hannah, and Terrence, graduated school, and each one has a job! Owen works for the C.I.A., Hannah for a big-time law firm, and Terrence for the Department of Treasury. However, of the three, only Owen finds himself dodging bullets, getting tortured, having to fly coach to Yemen, and dealing with multiple national security matters within less than a week.

So let’s get to it; Nyland, Owen’s boss, starts him off by having him shut down Senator Smoot exposing C.I.A. documents using legal precedent and jargon. This success is noted, but it also makes Owen an enemy, who later subpoenas him.

That isn’t the only enemy Owen makes, however. Lester and Violet, who originally wanted to prank Owen, as the new kid, by giving him all the mail neither went through when they were new, become his next enemies. Why? Because Owen finds a viable threat in the mail they should have touched within his first three days.

Now, with those two in trouble, and Owen trying to impress Nyland, he doesn’t really have a mentor. So, he tries to coerce Janus, a high-strung lawyer trying to keep a special operations group from causing a cluster f***, to be someone to go to, but Janus isn’t really interested. Mainly since he feels it is safer to be under the radar and not have friends or a network than to put yourself out there and then thoroughly get screwed.

Because of Owen finding a letter from a “Hip Pocket Asset” named Max, who threatened to expose C.I.A. secrets, and having no one at Langley to advise him, he does as he usually does – learns as he goes. This means tracking down an agent named Dawn, who is currently in Yemen, and getting tortured since Owen didn’t have the credentials to go to a C.I.A. black site.

But, while getting his fingernail pulled off, he gives his life story, mentions Max’s name, and with that, the torture ends, and a person-to-person conversation begins. One that leads to Dawn giving him advice on how to survive in the C.I.A. and that sometimes keeping your mouth shut is the best way to make friends.

As for how Nyland felt about Owen doing an unsanctioned visit to a Black Ops site? Well, he admires the initiative, and with that, all the grunt work Violent and Lester gave Owen is rescinded as he goes to meet Max in a Phoenix prison – where she is due to being found guilty of murder.

She, naturally, isn’t fond of a newbie who hasn’t done his research and seems ill-prepared to speak with someone of her stature. But, as he catches onto how things go, Owen proves himself able to potentially handle someone like Max. Mind you, his first test of trust with Max almost leads to an acid bomb destroying his face but luckily, two people trying to rob Owen end up dealing with that instead.

Yet, despite the trickery and how dangerous Max could be, he decides to be all in so that he can find out what she knows, remove the threat without killing her, and maybe make his dad proud by protecting his country like he did, before his father was blown up on duty.

Investment In Owen & His Personal Life

While it should be stated, interest in Owen’s life, as well as Hannah’s, is because we’re familiar with the past work of both actors, I think the investment could transfer over. Owen being new to what he does, failing, but not in a dramatic fashion, allows you to see someone who could become a legend before your very eyes. And considering Owen isn’t cocky but is up for a challenge, you want to see him do well.

Also, you want to see him not be like Janus, or many professionals we see on television, and have a healthy personal life too. This is where Hannah comes in since we don’t know why those two broke up, but there is still chemistry there. Hannah still cares for Owen in some way, and their breakup had to be some form of amicable for them to live together.

Granted, in D.C., living alone was probably not an option, but considering whatever friendship was built during or before their relationship still exists, there is hope.

What makes Max worth noting is that, even with her being touted as your usual Russian villain who is not to be trusted, the groundwork is being laid down for her to be something more. While confident at first, as Owen starts to catch up on how to handle someone like Max, there is a slight vulnerability there. The kind that could be a trap but also could be genuine. So to see how she tries to get the upper hand as she brings Owen closer is going to be something worth following carefully.

The Majority Of C.I.A. Characters

Perhaps the main issue facing the majority of the C.I.A. characters is that, while you have to appreciate their comedic personalities, the way their personalities are supposed to mix with the seriousness of their work isn’t balanced. Janus, being the overworked person telling the new kid to quit, doesn’t present to you someone we should see as serious. Yes, he is sleep deprived and trying to stop a potential international incident, but his tone and actions less exhibit an overworked lawyer who hates his job but probably knows too much to quit, and more gives comic relief.

The same goes for tweedled dee and tweedled dum in Lester and Violet. Can this combination evolve into something where we see why finding one true friend is not only hard in the C.I.A. but essential? Yes. However, thus far, they just seem like upperclassmen who are lazy and are picking on the new guy as a means to keep from doing essential work. And while I get the sentiment many have about those in government not doing what they are paid for, again, the push for comedy, as Owen has scenes where he is tortured, doesn’t feel properly balanced.

Then, with Nyland, the head of general counsel? The issue there is he is played the way you expect, and nothing is brought to the character that doesn’t make you think anyone couldn’t play the role the same. So here is hoping first impressions are incorrect and these characters grow and expand over the next 7 episodes.

The Recruit: Season 1/ Episode 1 [Premiere] – Recap/ Review (with Spoilers)
Overall
"The Recruit" starts off a bit lopsided as you quickly become invested in the lead, but regarding many who work in the C.I.A., they are more of a blemish, a bruise, a cyst or welt than assets which could play quality supporting roles.
Community Rating0 Votes
0
Highlights
Investment In Owen & His Personal Life
Max
Disputable
The Majority Of C.I.A. Characters
79
Subscribe to our mailing list