Wherever I Look
Recaps, Reviews, and So Much More
Home TV Series The Handmaid’s Tale: Season 2/ Episode 4 “Other Woman” – Recap/ Review (with Spoilers)
TV Series

How long can you fight and be defeated, be the cause of others misery and death, before you decide to give up? It seems June has found out the answer.

Annie Are You Okay?: June, Luke

As noted in the first season, Luke and June meeting each other wasn’t without complication. Said complication being Luke being married and in this episode, we meet his ex-wife Annie. Someone who was Luke’s first, just separated from him for 3 months, and was still hoping to reconcile. Yet, that dream never came true and with seeing Hannah one day, randomly at a coffee shop, you see a look of total devastation. Which, when combined with how June talks, leads you to believe Annie did more than simply walk away with a bit of devastation but perhaps did worse. Kelly Jenrette as Annie, Luke’s Ex-wife
—
“I was his first, did he tell you that?”

The introduction of Annie is a bit of a strange one. While it is understood she is part of the list of lives June has ruined, thus leading to what could be noted as a mental breakdown, it seems strange to introduce her now vs. an appearance in the first season. Much less, her being the sole reason we end up venturing into the past. But, to really drive home June’s guilt and make it not just about people who lost their tongue or life, but simply lost a source of their happiness, I guess she had to appear.

Especially to make June realize she can’t blame Gilead and their policies for everything. Some things were, without question, her fault. Well, Luke’s as well, but you get the idea.

The story goes that for 92 days June was kidnapped. During that time, it seems, according to Alma, Mayday decided to stop helping Handmaids and Rita bore the brunt of Serena Joy’s anxiety and anger. Heck, even with June back she still does since she may despise June but still wants the baby. Something that, with June clearly a bit too strong-willed and untamed, means Aunt Lydia taking a more hands-on approach.

Assuming she has no other girls to worry about, she focuses all her attention on June and Serena Joy. Something which is a good thing too because Serena Joy seems agitated enough to do something drastic. Her ego is hit by the scandal and June undermining her, saying things which feel antagonizing, like June mentioning her baby shower for her biological baby, it sets her off. To the point Serena Joy rather the alternative of June being trapped in a room and giving her child than having her in her household. 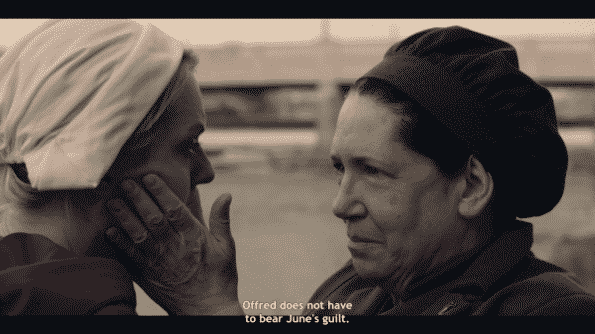 “Offred does not have to bear June’s guilt.”

However, being that Aunt Lydia, while perhaps finding June tiresome, admires her spirit, she pushes to maintain June’s stay in Commander Fred’s household. Though, to break June in, once and for all, she takes her by the river to reveal Omar has been hung, his wife a handmaid to atone, and their child will never see either one ever again.

Thus seemingly killing June’s spirit and with that note in the closet gone too, seemingly this wild mare is now a broken in animal.

In a world like Gilead, to be as strong as June was for as long is commendable. But there had to come a point where, be it for the sake of her own survival, or maybe being some minor part of Mayday, all her gestures would become futile. Yet, being that no show has its protagonist just break down and give up, so comes a few questions. One being, with June in the state she is, seemingly losing it, does that mean we may switch to Canada or to Emily for an episode? Maybe even experience a time jump?

Also, is it safe to say, somehow seeing Hannah, that might end up being the jolt June needs? For, before her breakdown, the deal of your child is safe as long as mine is was reiterated. But, with that in mind, how interesting would it be to spend a day with Hannah. It seems pretty well established what life is like for adults in Gilead, whether in the colonies or the less toxic areas. But what about children and teenagers? How is the propaganda taught, what it is like being raised by someone who, for those like Hannah and Omar’s son, you know are not your parents? Also, while Aunt Lydia has clued us into how the past is taught, how do the kids react?

Though, as an alternative, it would also be interesting to see Mayday and how they function as well.