The mystery which is how James’ mother died is addressed, as well as the police’s investigation continuing – leading them to James and Alyssa’s parents.

Table of Contents show
1 Mommy Dearest: James, Phil, Vanessa
2 The Investigation Continues: Teri, Eunice, Tony, Gwen, Phil
3 I Knew You Were Waiting: Alyssa, DC Onslow, Emil, James
4 Question(s) Left Unanswered
5 Collected Quote(s) & .Gifs
6 Highlights
6.1 What Happened to Mommy
6.2 When Love Is Hard, Loyalty Will Keep Us Together
7 Follow Wherever I Look on Twitter or Like us on Facebook.

It has been 11 years since Vanessa died. Not by anything necessarily dramatic mind you. James didn’t find her floating in a stream or anything graphic. She basically drowned herself. While James was feeding ducks, she drove into the water, let the car fill up, and drowned herself. Leaving the weight of not doing anything in the moment on James, and Phil having to deal with pushing his wife to get out of the house after something surely happened to her.

With Topher giving up names, and James’ disappearance being put out there, Teri and Eunice head to Phil’s house. This leads to them raising a bit of an eyebrow when seeing Phil’s shiner and also learning his car was stolen. Both of which Phil covers up the best he can since, as noted in the last episode, if James is gone – permanently – who will he have? Like many adults in shows focused on teens, Phil doesn’t seem to have friends of a life outside of his kid. So if he goes up the river, there may just be a temptation to be next.

Yet, the sort of protection Phil provides is utterly absent when Teri and Eunice visit Tony and Gwen. In fact, with the way Tony talks and Gwen acts, Eunice is tempted to call child services to protect the twins. That’s how off-putting Tony is and how odd and selfish Gwen comes off.

Oh, and they sort of clear the air about whatever happened one drunken night. Well, at least Teri clears it by saying, “I don’t regret it, I just wish it didn’t happen.” Which sounds a bit insulting but being that Eunice is the good cop to Teri’s bad cop, she doesn’t push this slight to her person.

I Knew You Were Waiting: Alyssa, DC Onslow, Emil, James

Despite James calling the police, once DC Onslow, a detective, asks about the murder, he flips things to talking about his mom. This makes DC Onslow a bit uncomfortable, but he tries to help. For even if the suicide was 11 years ago, you see some kid come in battered and bruised and that raises some red flags don’t it? Same goes for Alyssa. With her period starting, she decides to steal tampons and some underwear and while she gets the tampons, Emil catches her when it comes to the underwear. Yet, after escaping Emil but returning with some kid, and Emil noticing the bruises on Alyssa’s arm, he lets her go. Clearly, she has enough problems that involving the police over some underwear isn’t worth it.

And with that, she is back on the streets and now thinking of James. It clicks that the murder was for her benefit and taking note of how he only jumps into action when she either asks for it or signals, she thinks the worse. Luckily though, after his adventure, James went back to the cafe and is still there when Alyssa arrives. Also, he isn’t even mad she abandoned him. He is just happy she is there and to show she won’t leave him again, she fulfills his request to hold hands – just not with the burnt one… that would be creepy.

I don’t regret it, I just wish it didn’t happen.

What Happened to Mommy

In an episode of SMILF, the topic of epigenetics comes up, in regards to the passing of trauma and certain negative aspects of personality, among other things, from generation to generation. With learning and seeing Vanessa, you can kind of see her influence on James. For, when things were good, you could definitely see James being like his dad Phil. Bouncy, happy go lucky, and yet now he is very much like his mom. Her death triggered whatever genes she had which made her feel life was miserable and until Alyssa, that was the state he was in.

But, now there is the need to ask what made mommy so sad? Was it Phil, post-partum depression, or maybe something else? For it is one thing to kill yourself by hanging, slitting your wrist, or pills, but to drown yourself? Perhaps one of the most excruciating ways to die, and we don’t hear or see her trying to escape the vehicle, you know something serious must have went down.

When Love Is Hard, Loyalty Will Keep Us Together 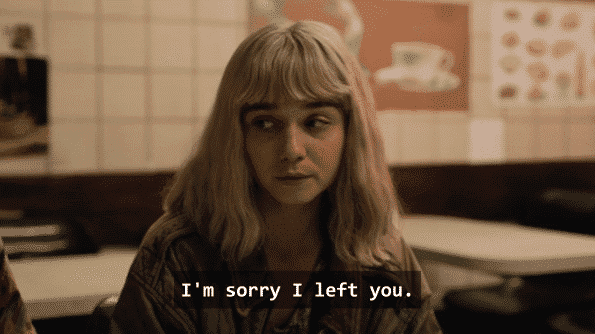 With the examples of love they have had, it was interesting to see Alyssa return to James and him to return to the last place he saw her. For, just taking note of their parents’ relationships, you can kind of see how they are trying to not repeat their mistakes. For Alyssa, she doesn’t want to abandon James like her dad abandoned Gwen, yet she also is using Gwen as a negative example. Rather than be passive, she is an active participant in her relationship with James, questions him, guides him, and can be seen as an equal partner.

Then with James, taking note of his mom and dad, you see him attempt to be the protector that neither he nor his dad were to his mom. He takes the time to check on Alyssa when he thinks something is wrong vs. force her out of an emotion she is feeling – for either his benefit or what he believes is best for her own. On top of that, he gives her space.

Which, even with the very little information we got about Vanessa and Phil’s relationship, seems like maybe that was one of the issues. Vanessa, paired with this jovial man, never got the space she needed to recover from whatever her mind was going through. And I think that is why James returned back to the cafe. In that idea, I think there was hope that what they’ve been through together, it has bonded them to the point that while she may need time alone to process things, she wouldn’t outright abandon him. But also, he wouldn’t abandon her just because things got hard. Something Alyssa probably needed for that might have been the case when her dad left so James still being there, even like some sad puppy, was reassuring in a way.