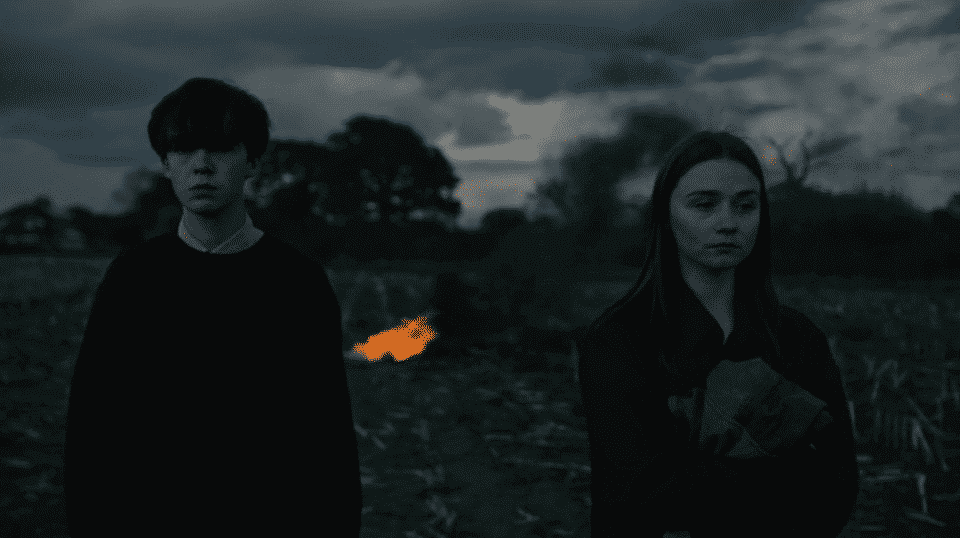 It’s the day after the events of the last episode, and it seemingly has changed James and Alyssa’s relationship for the worse.

The Cover Up: Alyssa, James

Despite how weird Alyssa seems, there is no romanticizing the idea that James killed someone to protect her. Nope. Straight up, her first thought is cleaning up the place, so no trace of them is left, wondering why James had a hunting knife, and things of that nature. Especially since now she has the trauma of being bled all over and watching someone die and, as we already know, while Alyssa talks and acts like a bad ass, she is actually a turtle.

While Alyssa and James clean up any traces of them, there remains the problem of Topher. For one, he left his wallet and it was found by one of the crime scene investigators. Then, there is the issue that when Clive’s mom found him, she got rid of all the evidence of what a horrible man her son was. Lastly, there is the issue of Topher naming names and describing Alyssa’s jacket.

Thus sending Eunice and Teri, who I truly believe had something going on – romantically, searching for missing persons. Which, with James’ dad calling the cops on him, he is sure to pop up soon.

I Need Some Me Time: Alyssa, James

At first, in James’ mind, he saw himself as Alyssa’s protector. He saved her from being raped, possibly murdered – go James! Yet, now everything has changed. He made her laugh once, but she won’t hold his hand. Perhaps reassure him after he has come to realize that he is in no way a psychopath. But, unfortunately for him, she’s gone. Not just mentally, possibly emotionally, but physically as well.

Thus sending James way back to the place he used to be. Not just before he met her, but maybe to when his mom died.

We All Cope In Different Ways

Coping mechanisms, strangely, are kind of a big thing this episode. We see it mostly in Alyssa trying to ignore the truth, like her father basically abandoning her and not really looking back, trying to ignore the fact James killed someone for her, and even James himself. I mean, really thinking about it, how much you wanna bet Alyssa’s mom is the reason she got birthday cards from her dad? If just as some token gesture to maybe make Alyssa smile without pissing her new husband off?

But what is also interesting is comparing James and Alyssa in how her first response to the situation was shutting down, just like James’ was when his mother died. Then, from there, he suppressed and ran away from his feelings, just as Alyssa is doing. Though, sadly for James, she has opened him up beyond going back into his shell and seems unable to know what to do. Hence why he pays to be jumped. Basically, he is repeating that whole hand in the deep fryer thing.

Yet, with James seemingly realizing there is no more going back, he reports the murder. Pushing you to wonder if he may confess or not. If just to protect Alyssa.

Oh, and before I forget, there is also a need to bring up how James’ dad would cope with noise. Though a bit of a tosser, you can tell that the silence probably drove him mad. Hence why he was loud and acted as he did with James. Perhaps like Alyssa, he just wanted a reaction out of someone. Some sort of attention to feel less abandoned and alone. Yet, no matter how he tried, James wouldn’t give him the satisfaction. But, like Alyssa, at times just having the companionship, a person there, was good enough.