Wherever I Look
Recaps, Reviews, and So Much More
Home TV Series The End of the F***ing World: Season 1/ Episode 2 – Recap/ Review (with Spoilers)
TV Series

As Alyssa starts to push James for more intimacy, it seems he is slowly questioning not just how but if he can kill her.

Table of Contents show
1 So You Can Be Fun?: Alyssa, James
2 An Alternative Lifestyle: Martin, Alyssa, James
3 It’s Hard Facing the Truth: Alyssa, James
4 Other Noteworthy Facts & Moments
5 Collected Quote(s) & .Gifs
6 Highlights
6.1 Alyssa
7 Follow Wherever I Look on Twitter or Like us on Facebook.

So You Can Be Fun?: Alyssa, James

As you can imagine, when you’re in a bit of a rebellious phase like Alyssa and need someone to react to you, positively, negatively, whatever, James is a bit of a downer. He doesn’t take much in the way of initiative, speaks in a monotone way, and only engages you when spoken. Yet, he has his moments. He does lick her ear when she tells him to and with him being so quiet, there is the hope that he is listening. Plus, he did initiate dining and ditching, right? Now, if only he’d have sex with Alyssa and she might be a happy girl. 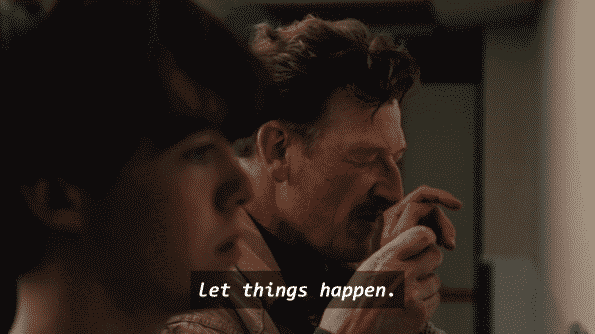 Geoff Bell as Martin and James

While trying to get James to have sex in the car, he ends up crashing it – thus forcing her and James to have to hitchhike. Which, luckily for them, this army veteran Martin picks them up. Though, upon hearing he was in the army, much less is traveling to buy a fighting dog, Alyssa hates him. Maybe also because James opens up to him with the truth about his mom – the fact that she is dead.

But it doesn’t end there. After she storms off in a diner they go to, because James won’t join in making fun of Martin’s kids, she later discovers Martin and James in the bathroom, with Martin’s burnt hand on James’ penis. Thus making her wonder if James is gay, he says he is not, and blackmailing Martin for all of his money. 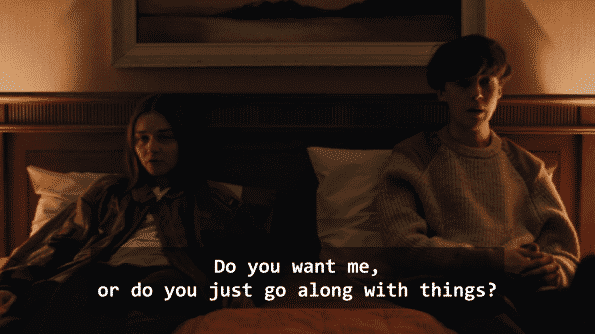 After the bathroom incident, Alyssa is faced with some tough questions, some of which require asking. First off, is James just going along with her plans because that is what he does? You tell him to do something and, no matter what it is, he does it? Then, with him lying about his mom, what’s up with that? Did she do something to him, touch him maybe [note]More so my question than hers[/note], and what about her mom?

She calls the house, her step-dad picks up, and he says her mom doesn’t want to speak to her. We even see she is in the room and doesn’t fight to speak to her oldest child. So, is the truth that Alyssa truly isn’t wanted or loved and all she has is James, maybe, and hopes her dad may want her?

Meanwhile, as Alyssa is having a bit of a crisis, James is kind of as well. One in which you can look at in a few ways: The first, while killing small animals is easy, maybe he can’t kill a human being? The second, maybe it is just Alyssa, with her being all open and emotional with him, he can’t find it in himself to kill her? If not the third, while James wants to kill her, he keeps missing his chance to do so in a way which won’t get him caught.

No matter which one it is, clearly Alyssa is going to live for a longer time than James originally planned. 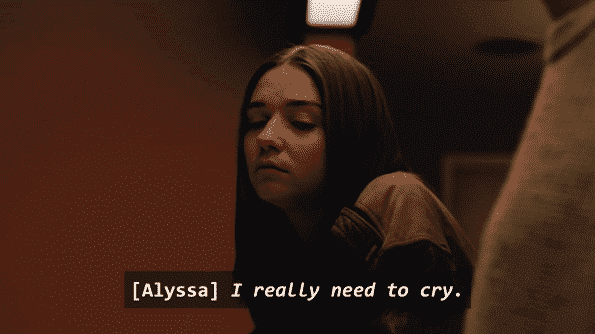 There is something oddly appealing about Alyssa. Granted, she seems like an utter pain in the behind, especially since she likes to pick fights. However, with us hearing her inner thoughts, you get this idea that she picks fights just so someone engages with her. Shows her more than fleeting attention but a passionate engagement where they have to look her in the eye and put in the effort to figure her out. Even if it is just trying to understand what is wrong with her.

Which I think is why she has been so okay with James and has been adapting so much to him. He not only listens and responds, but if she asks something of him to do, he does it. Heck, him dining and ditching, that has probably been one of the most exciting moments in her life for some time. Thus making you understand the heartbreak when her mom wouldn’t take the initiative to pick up the phone and the question of whether James is just a do-do bird following and doing as she says.

For while it is nice to have companionship, if that person isn’t an active participant in what you’re doing, what’s the point?