The Bold Type is back and though only two weeks have gone by in their world, it feels like so much has happened.

Table of Contents show
1 Don’t Wanna Bring Other Women Down: Jane, Victoria, Jacqueline, Emma
1.1 Commentary
2 Sleeping Your Way To The Top: Sutton, Alex, Richard, Mitzi
2.1 Commentary
3 You Never Eat Me Out: Adena, Kat, Jacqueline
3.1 Commentary
4 Collected Quote(s) & .Gifs
5 Highlights
6 Follow Wherever I Look on Twitter, Like us on Facebook and Subscribe to the YouTube Channel.
6.1 Previous Episode’s Recap
6.2 Check Out Other TV Recaps
6.2.1 Jane being seriously challenged in terms of Emma Cox not telling the hold truth and Victoria twisting her words for the sake of hits. - 90%
6.3 90%

Being that Jane is a young millennial, privileged enough to live in NYC without much in the way of troubles, of course, she wants to uplift other women. Especially those she can identify with like Emma. Someone who is young, a CEO of a menstrual cup company, and someone Jane wants to be part of her “Feminist Army” vertical. However, there is an issue. As part of Emma’s brand, she donates cups to homeless shelters but the issue with that is use of the cups assume you have the ability to sanitize them. That isn’t the case.

This causes an issue for Jane because, naturally, she wants to support a woman, not say she is presenting false advertising and causing women to go to the hospital. Yet, with Sutton and Kat still engaged and around Jacqueline, it means seeing her and questioning her choices. For while Victoria is cool and all, she isn’t the nurturing figure Jacqueline was. So to not present this idea things are, not necessarily better but were worth the transition, it means looking foolish.

Which, in the end, Jane kind of does for her article which likely tried to be fair to Emma’s pursuit of trying to provide a service leads to Victoria editing it to trash her. Just for the sake of hits. 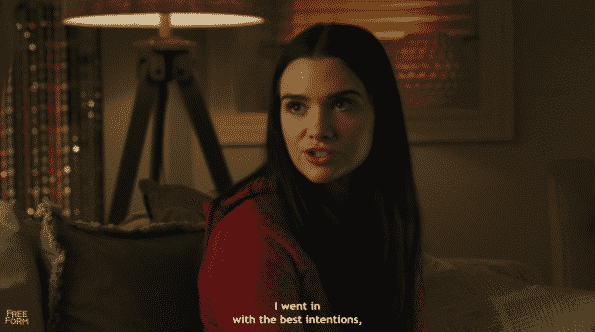 Jane: I went in with the best intentions.

What Jacqueline presented at Scarlet was a safe place. One which allowed Jane to push the envelope but never really be used for the sake of the publishing. With Victoria though, totally different situation. Victoria is a shark, hence why she poached Jane and Jane, being a fish who wanted a “challenge” took the bait. So now the challenge is probably going to be dealing with the backlash which likely is going to come from being something she never wanted to be.

Yet, in that, it makes Jane interesting. For one of the issues Jane presented consistently in season 1 is that it seemed things came too easily for Jane. That she was the lead who could barely do anything wrong and the world, for reasons unknown, made it fairly easy for her to live. But now with Victoria manipulating her words, her sort of sticking out at work, and things like that, we see a real challenge beyond the whole writing thing. Which may make the dullest character on a lively show interesting.

Sleeping Your Way To The Top: Sutton, Alex, Richard, Mitzi

While Sutton is getting one style credit after another and is doing quite well, some side eye her accomplishments, like Mitzi. In her mind, the only reason Sutton is getting these jobs is because of sex. Not with Richard mind you, though they have smushed once or twice since last season’s finale, it’s Alex they think is giving her jobs. So, with that starting to circulate, it is decided Sutton can’t style the newly bearded Alex as much as he wants her to.

Though, it also screws things up between her and Richard as well. There is a new corporate policy which is a consensual contract. Of which, the gist is, you need to let HR know you are dating someone within the company so that it can be cool. And, Richard is down for it but Sutton really doesn’t want sleeping with one co-worker or another to shadow her reputation. Even if it is just the case of someone saying, “Did you know Sutton slept with so-and-so at the beginning of her career?” Because she works so hard to gain merit that she doesn’t want word of mouth tainting it.

So, while it is difficult to really break things off with Richard, she does so and even deletes his number from her phone. The main point of Sutton’s whole storyline this episode is how corporate policies protect the company and don’t protect the reputation of the staff members. Especially the women who will always bear the brunt of whatever does or doesn’t go down. After all, Alex and Sutton slept together once but apparently, people think it is an ongoing thing. So imagine her going public with Richard after that. Not only will it make it look like she upgraded to a board member but considering the way some of the men on the board act? HA! You could fully expect a #MeToo moment if Sutton went down that road. Talent in design or not.

But, with all that said, it makes you wonder, with Sutton’s life pretty much-being work, does this mean we may get a young woman on a show who may not date? Who may actually focus just on her career? Not to imply Sutton couldn’t have both but it is rare for a show to not make dating obligatory for a character like a checkbox that must be ticked off.

You Never Eat Me Out: Adena, Kat, Jacqueline

While her sudden two weeks off was a bit jarring, Jacqueline was fine with it and it seems Kat won’t get any issues about it. However, now she really needs to hit the ground running and being that its Kat, naturally that isn’t an issue. She gets invited to a board meeting and challenges a member and while Jacqueline has to reign her back a little bit, she of course appreciates how clear-headed, prepared, and outspoken Kat can be. Kat’s work ethic and speaking up for herself are goals. Especially because they go beyond just being right or good at her job, but a genuine love for the magazine. And just Jacqueline sometimes being in awe of her is so sweet to see. Even when she realizes Kat needs to be pulled back because she is going from presenting a point to becoming obnoxious.

Though this Adena thing, beyond the who oral sex bit, is of interest. For Adena essentially has 3 months to find a stable position and though barely back, there is already this vibe of unhappiness you know. Like, seeing Kat be social and have all this work to do while she is searching and in the apartment is an issue. Much less being this thing to show off and sort of being like a house girlfriend? You get what I mean?

Adena wants to be able to say she is doing something, saying something beyond how great Kat is, yet it hasn’t happened yet. And I get she is barely back in the states so maybe I’m reading into something which isn’t there. However, this whole not liking PDA thing, around Kat’s co-workers, I definitely think deals with her wanting to bring something to the table that is present or planned.

Jane being seriously challenged in terms of Emma Cox not telling the hold truth and Victoria twisting her words for the sake of hits. - 90%