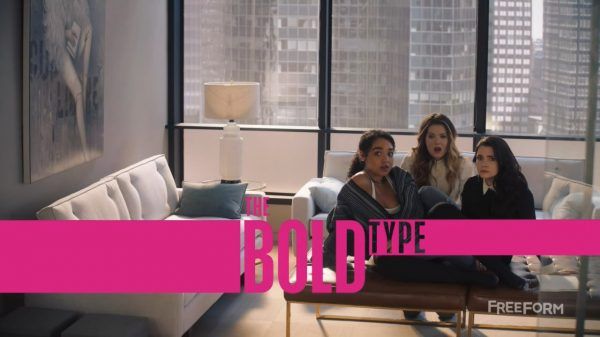 The Bold Type continues to present a different voice for the young woman. One which brings on the different thoughts, dreams, fears, and personality types without necessarily feeling like tropes. For there is a serious effort by the writers to present real people with layers and complexities and not some mindless guilty pleasure. 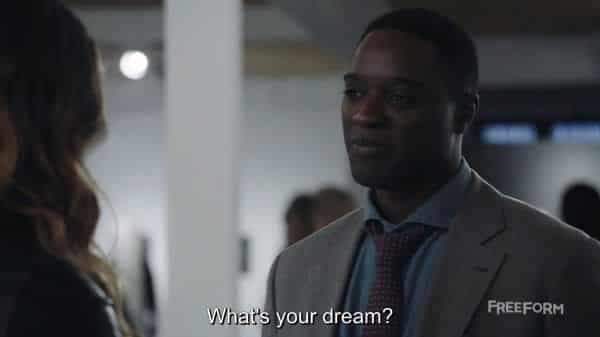 As noted in episode 1, Sutton is the last of her group to be promoted out of an assistant role. But, with Lauren, she finally takes that leap. One not into the fashion department but the business side of the company. Which, with an excellent resume and Richard working in the department, makes things seem like a cinch. Problem is, while the job’s pay exceed’s Sutton’s needs [note]Which seem to include helping her mom with her bills.[/note], will it make her happy?

That is something she tries to talk about with her girls, but they got their owns things going on. So, thankfully for Sutton, Alex (Matt Ward) is a very dependable guy. Someone who both is able to gas her up on the opportunity but also asks if it is what she wants. Especially if she puts the money aside. Leading her to, in the long run, reject an offered ad sales position. For now, she has decided to go all in one the dream. To the point, she spends the $100 she has saved just in case she failed and needed a ticket home [note]to Harrisburg[/note]. 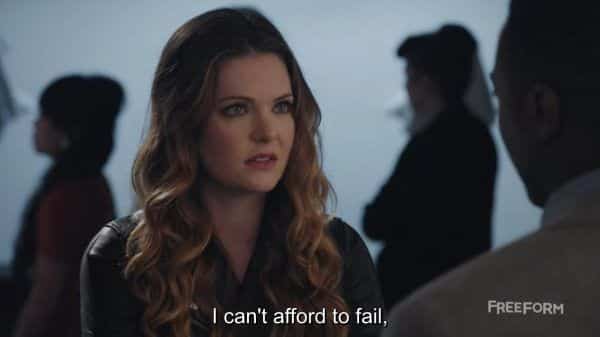 Being that the actress who plays Sutton was unfamiliar to me, I figured she’d be the one I liked and connected with the least. However, her issues resonated with me. Just in a general, sort of millennial vibe. For with her, you get that real “Should I pursue my dreams or pursue money?” conundrum. Especially since she doesn’t have Kat’s privilege or Jane’s, whatever Jane has. She is seemingly a poor girl who, through working at a temp, got lucky enough to land at the magazine. Yet, it is becoming clear that their name on her resume isn’t enough.

Which, if you are around Sutton’s age, you can understand the frustration of. You went to college and have been told most of your life, that is what will make you set. Yet, even with that piece of paper, you find yourself struggling. Especially once student loan debt comes into play and then your family thinking, with you not focusing on school, you can and need to actively contribute.

So, in a lot of ways, you have to hope you can find a cracked door here or there, if not a window, to find your next meal and dollar. And somewhere in pursuit of just handling your basic needs, it becomes hard to even imagine going after your dream. For if you stop focusing on the hustle which is the main thing supporting you, what may happen if you fail? In that far off dream, until you truly make it, it is like being on a tightrope. And depending on the industry, there won’t be a safety net. So if you are like Sutton and want to pursue something which isn’t, as she says, “practical” you have to be willing to risk it all. Something which is not at all easy. Yet, at the same time, it is what makes her kind of inspirational. To make a long story short, with one of the writers getting pulled from writing a sex column, Jane is given the task. Then, to seemingly make matters easier for her, she is even given a topic. The problem? It is about the best orgasm you ever had. Something which has alluded Jane through sex and even me time.

For despite Ryan working for the men’s magazine Pinstripe, and Jane having a negative impression of him, she thinks he is hot. Plus, he flirts with her. So when Jacqueline rejects Jane’s original draft because it is way too technical with its stats and graphs, she decides to write something personal. The type of thing Jacqueline expects her to write. An article which presents the magazine as what it was to Jane. A sort of big sister or maternal figure who either provides advice, relates to its reader, or tells them things they may have been uncomfortable to seek the answer to.

Was it wrong for me to think Alex would have been Jane’s love interest? I mean, I’m cool with him just being the group’s go-to guy friend. However, his chemistry with Sutton and Jane makes you think he could be something more. Though, who knows, he may be revealed as gay just to squash any of those ideas.

That aside, I hope Jane’s journey to her first orgasm isn’t handled like a Carmichael Show topic. Especially after, for reasons, I can’t fathom [note]because who is really on their company’s front page and has it where you get alerts for every posting?[/note], her article spreading through the office like wildfire.

But, if I may say, while Ryan seems like a nice FreeForem Abercrombie modelesque guy, I just have so little interest. In comparison to Alex with everyone, Adena with Kat, or Richard with Sutton, it just doesn’t click for me. It just seems like your usual FreeForm, “Let’s put two attractive people together and hope for the best” type of relationship. 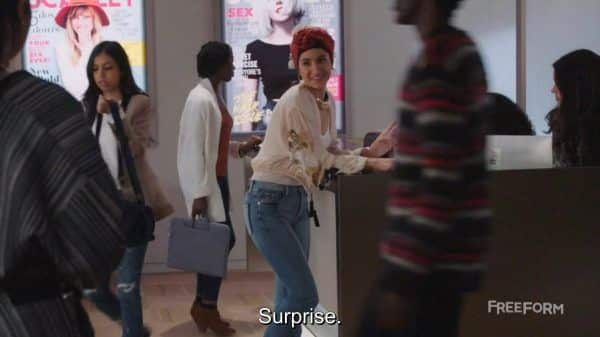 Kat is seemingly lesbian for Adena. She toils with the idea of maybe she is bi, fluid, maybe there is a chance it depends on the person, but seeing Jane’s vagina, during the Yoni debacle, clears that up. Kat is hetero but something about Adena inspires sex dreams. Making it where, after returning from going ghost on her, she decides to maybe say something. Yet, with a young woman kissing Adena on the lips, she realizes she might have been too late. So she just keeps things cordial for now. Leaving us wondering if perhaps the most interesting characters on here will have a slow burn of a romance.

What you have to love about Kat is despite how Sutton notes she is financially privileged, she is probably the hardest worker of all the girls. Now, as for whether her parents gave her a leg up at all? I don’t think that has been noted. However, what seems to be for sure is that while, career wise, Kat has things handled, her romantic life isn’t as easy to manage. It is noted that Kat’s relationships don’t last long and with that said, you have to wonder why? 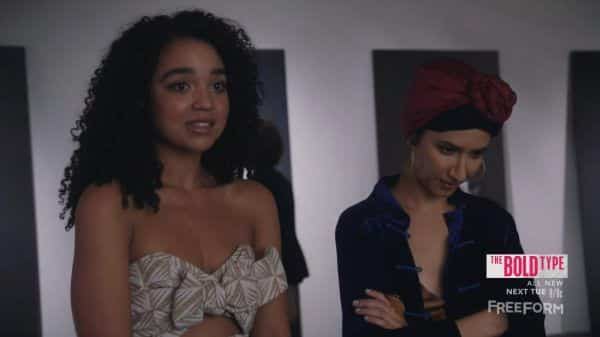 Basing things off this Adena situation, I’m driven to the opinion it could because she likes the challenge or fantasy. Kat is an achiever and once she gets what she wants, she is ready to move on. Hence why this Adena thing bummed her out so much for it was probably one of the rare times she felt some form of rejection. That alongside perhaps other issues that we haven’t become privy to yet.

Either way, I remain the most excited for this Adena storyline just because of how relevant to modern times it is. For between her and Sutton, I get this sense of realness. Something I won’t say is missing in Jane’s story, but I do feel Jane is still very much an archetype. One which can blossom into something more, but isn’t at that place yet.

Why did you assume that Ryan delivered her first orgasm? She kissed him and that was it. I think Jane was being bold and embracing that it’s okay to not have had an orgasm yet and to share her story. Ryan isn’t the solution. Nowhere in the show does it hint towards that. Jane is perfectly fine in writing her story.

Regarding Adena, I think the show explores the fluidity of sexuality and that attraction doesn’t necessarily depend on gender. I also disagree with the opinion that Kat likes the challenge or fantasy of relationships. Kat overcame the challenge of getting Adena to give the okay for the article but Kat still tried to reach out to Adena for personal reasons too after the first episode. Kat is attracted to Adena in a way that she can’t quite pinpoint and seeing Adena kissing someone is enough to bum her out…it’s enough to bum anyone out. I don’t think Kat sees getting Adena as some sort of “achievement”. Kat even claims she doesn’t like women. She has nothing to gain yet she is still drawn to her.

Excuse my wording. I meant that, after her article about never having an orgasm, her relationship with Ryan may bloom to her having her first one. Thus leading to a follow up article. Especially considering the way Ryan talks about his articles, it seems he may know a little something-something.

As for Ryan specifically, and Alex’s comment on his writing, I do hope you’re right. For this show does seem like a positive step forward for FreeForm vs. their more recent series.

Then with Adena and Kat, it is what Sutton implies that makes me wonder why Kat’s relationships fail. So I figure it has to do with her being there for the fun, the challenge, but once things lost its luster, she is out. Which is kind of what I see with Adena. Not to imply it can’t be something real, but I do think this mystery of why Adena is someone who she can’t shake is intriguing to her. It makes her think and gets those gears moving. Yet, I do wonder, maybe even fear since I like them together, once she realizes being with her may not live up to the fantasy, or after she fulfills it, then they might be done.

But I do see where you’re coming from and it definitely gives me something to think about.