by Amari Published: May 3, 2018Last Updated on April 26, 2020
FacebookTwitterPinterestRedditEmail

Be Careful Who You Make Enemies Out Of: Ayanna, Jahil, Carlotta, Maurice, Natalie

Remember when Ayanna threatened to out her dad for past sexual misconduct? Back in episode 11? Well, someone else has caught wind of what he has done and with that, Ayanna is back and people are quite shocked. Jahil and Maurice especially since Jahil is the reason she lost her position and Maurice thought, with Charles at the head, he was on his way up. That’s no more and Ayanna makes sure to check everyone who would think otherwise.

But, despite a tumultuous past, Carlotta isn’t really that pressed about Ayanna’s return. If anything, she is more so focused on Natalie who, with this NOLA Pride performance, while it seems a good move she picks up on a few things. Like Natalie not only receiving kickbacks but also maybe some back shots from Maurice.

So, with that knowledge, she calls out what Natalie has been doing to Maurice and punches that negro dead in his face.

Midtown is such a hot mess. Ayanna made deals with Charles’ ex-partner which screwed things up, Charles used his power and influence to have sex with artists and after being ousted Ayanna is back. Imagine a real label going through all of this. Then again, considering the music industry has only been hit with a few #MeToo takedowns, maybe it is only a matter of time? 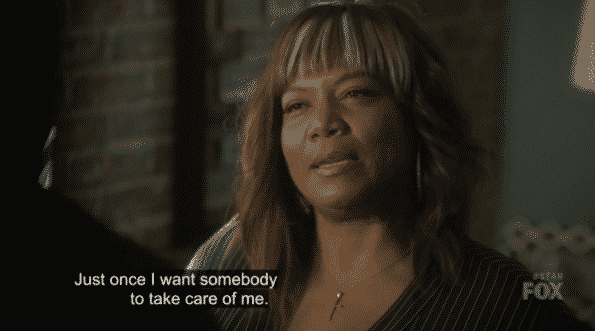 “Just once I want somebody to take care of me.”

That aside, really, who thought Carlotta and Maurice were end game? Heck, on this show, are any couples bound to be together through hell and high water? Alex and Derek seemed like a possibility but then she cheated and that went bust. Angel and Simone seem like they could be, marriage and all, but consider the drama of either one trying to move on and having to reveal they are married. With the way this show is, better bets are wondering if a couple may make it to the end of the season. Never mind thinking they will be forever.

Let’s start with Cotton. As you can imagine, but we hardly see on TV, trans people have children. Be it before transitioning or after. Yet, when they transition and aren’t part of their kids lives? How the child reacts to their parent not fitting into the binary most kids are taught? That isn’t something you really see. In fact, outside of Caitlyn Jenner and Laverne Cox on Orange Is The New Black, there probably isn’t another quick reference to go by.

But, as usual with Star, when it comes to Cotton, they don’t hold back, keep it only moderately politically correct, and dive in. Simply put, Jayden isn’t down with what he believes should be his dad being a woman. Something which, of course, hurts Cotton since, assuming she had bottom surgery, I don’t believe she can have kids now. So, this is pretty much her one shot and while Jahil notes it took some time for him to win over her, this is completely different circumstances. Far beyond, “Hey! Your dad is an addict, swindler, and made your mom’s life hellacious back in the day.“

Though, of course, with Jayden just being a nasty little brat, he has a seizure of some kind to try to balance things out. So he doesn’t leave things as someone you wished Miss Bruce whooped.

Switching to Noah, Alex, and Rose, it is such a doozy. When it comes to Alex and Rose, simply put, she is tired of her mom using her as a crutch and seemingly has reached the end of her rope. Especially when it appears Rose tried to take advantage of Noah. Someone who, with everyone being in NOLA for pride, is showing the slightest bit of homophobia. Well, nearly all the guys, but Maurice, to varying levels, show some form of discomfort.

For Noah, it is because his dad was on the down low and that made his feelings towards the homosexual community complicated. But what made things worse is that Andy, who somehow still has all his teeth and no bruises, decided to out Noah’s dad during an argument. Leading to Star, later on, who we’ve seen is very much pro the scene, trying to make it so Noah’s issues with his dad don’t spill over to how he feels about the community. Which is weirdly done by him singing Luther Vandross’ “Dance With My Father” at a gay club. 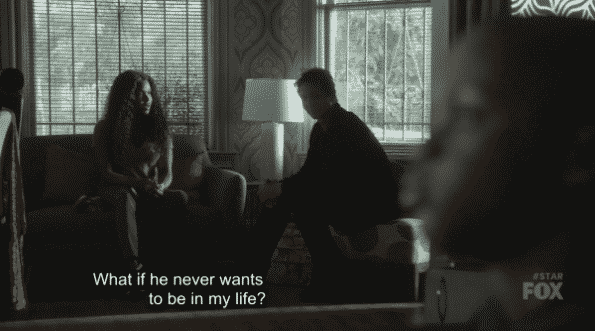 “What if he never wants to be in my life?”

Again, one thing I always loved about Star, and perhaps Lee Daniels productions in general, is that he is sort of next level Tyler Perry in a way. Like Perry, he focuses on Black culture and explores topics a lot of the comedies or indie/Oscar bait dramas don’t do. While urban, and about young people who struggled in life trying to get on the come up, it explores more than just their financial struggles. I mean, Noah and Jayden dealing with having a trans parent or father on the down low isn’t something you see at this level. You probably could find something on YouTube or buried in Netflix, maybe Amazon Prime, but not something which is promoted and with this kind of budget. And the visualization of what may not be average, but is someone’s story, has such a value in showing it exists.

On top of that, you have to appreciate how in neither situation, the ideal route isn’t done. Noah isn’t suddenly over his father being down low and leaving them for some dude. Just as much as Jayden, with being around Cotton, doesn’t want to get to know the person his parent has become (I really don’t know if it is appropriate to call Cotton his dad or not). Things on this show take time and even then, things don’t fully heal. They just scar over and that scab can be ripped at a moment’s notice.

I mean, look at Alex and Rose. Since Alex was 8 she had to deal with a drunk mom in her bed, crying over her father, and no matter how things seemingly could get better, that scab keeps getting ripped off again and again. Leading to the topic of Andy. Why doesn’t he have scabs, bruises, and is missing teeth? This privileged ass rich boy really is talking to these around the way kids the type of way that would get most people jumped. Maybe killed if you talked to the wrong one. So how is he not putting on as much makeup as Little Richard back in the day to hide what Star and Noah do to him? Because, seriously, he has gone beyond banter and being silly a long time ago. At this point, he should be on some punch on first tinge policy.

The Life Of A Survivor: Simone, Angel, Gigi, Ayanna

One of the people Charles used his power and influence over was Gigi. She was 18, unsigned, and like many on the label, enamored by what Charles has done. However, he took advantage of her. Leading to modern day where, there might be this feeling or reason to call him out but then what happens to Midtown? As we have seen, Midtown is hit with one scandal after another. Some on the low end, like when it seemed Noah was cheating on Alex, and then there is Noah’s best friend being killed and Midtown saying little alongside Ayanna being ousted. So imagine a scandal where Charles Floyd was abusing his power to sleep with artist?

But, the story of survivors isn’t just about having a #MeToo moment. It is also about having a life, sex life for example, after that. Something which is bugging Simone for Angel is really pushing to consummate the marriage but here is the thing: She has never had sex willingly, consensual, before. Because of that, she has been pushing this virgin narrative for she fears the truth may scare him off. And despite how they argue and how she isn’t at that point she can be completely open with him, she does have feelings for him, loves him even, and really does like the idea of being a wife. It’s just, bad childhoods, people doing you wrong, neglect, and stuff like that, those things can be easily shared. Someone sexually violating though, that brings about a different connotation that drastically can change a dynamic. 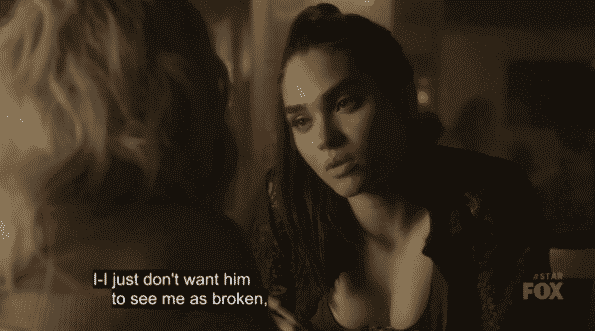 “I-I just don’t him to see me as broken”

You have to, again, appreciate the perspective given here. With Gigi, her not revealing what Charles did wasn’t difficult because of him but more so her not wanting to affect the careers of those who benefit from his work. Also, though not dug into deeply, it is also the guilt of it. Charles did what he did and she still signed the contract. Making it look like it was play to pay and she was cool with that.

Yet, at 18, with a deal in front of her, something a lot of musicians never get, you got to remember the power dynamics here. It’s like in terms of what is going on with Bill Cosby, Russell Simmons, and others. These people without clout to their name were in the presence of someone who could make a major change in their life. On top of that, be it naïveté or thinking they aren’t like that, certain things happened.

Things that, with the way the world is, they likely blamed themselves more than blamed the other half of the situation. If not also, like Gigi, took note of what them coming out would mean to all the other people who rely on that person for work. What it would mean if they lost their show, business, and became a pariah. Another factor, of course, is not being believed and you becoming the pariah, but the show doesn’t go into that.

Switching to Simone though, just as it was important to show what Gigi went through, so was it to show life after through Simone. After all, according to rainn.org, 1 in 9 girls, before 18, are sexually assaulted. And, again, when it comes to the type of stories Star tells, it is like all those urban dramas you see turned into a TV series. Making it where you see past them getting out of the bad situation. What we get is the full recovery, or rather the stumbling towards creating a new normal. Which, for Simone, deals with not only dealing with what Otis did, and his death, but also Karen dying and trying to deal with all that.

All the while, try to be this normal girl who has urges, clearly, but hasn’t really had the ability to express them in a way, with a man anyway, in which she maintained a sense of autonomy. A journey which should be quite interesting to see, as well as Angel’s reaction.

Noah Back to Drinking

Something that I will probably always appreciate with this show is no one stays better. Things may get better, but there is no such thing as being fixed. Triggers, struggles, outright setbacks, that leads to people digressing and brings about a certain realness despite the over the top drama, like Jayden foaming at the mouth, we see in the show.