Many of the relationships end up in jeopardy as third parties try to get involved. But, at least with one new third party, it seems everyone’s career may be moving forward.

Derek & The Need For Privacy and Cotton Being a… Parent: Derek, Ruby, Cotton, Mariela, Naskisha

With Derek trying to see if the consistency in his lower half isn’t just in his legs, it makes grandma Ruby blocking him from making moves a pain. To the point he begins saying some things he surely will have to apologize for if he expects there to be peace in her household. Though, with his check for the settlement being on its way, it seems he might be on his own in no time. That is, if Ruby doesn’t decide she wants a piece of that action.

Switching over to Cotton, needless to say, Nakisha is having a bit of a hard time adjusting to the changes. The humor is what makes it clear the person she knew still exists, but the physical change is still an adjustment. One she isn’t sure how to break to their child Jaden. For with him being old around 7, based on the last time Cotton was messing with Nakisha, he is still at that age where he doesn’t have a filter. So this will be interesting.

The whole conversation around Cotton being a dad has me on eggshells. How do you approach this idea? With Caitlyn Jenner, in a way, there is a blueprint but we’re dealing with a child here. Not even a teenager, but someone barely started in school.

Now, thus far, Cotton has been given a wealth of storylines which have revolved around what it means to be a passing trans woman and that being of benefit to her. So to kind of flip it and address how a boy seeing, what is his other parent, what he assumes would be his dad, yet said parent looks like his mom, that is going to be interesting. Not just in terms of what the kid may say, but how Jaden comes to process and maybe even accept Cotton for who she is. And that’s before learning who his grandmother and grandad are. Never mind Jaden’s eccentric play aunts and uncles – Like Miss Bruce and Star.

In terms of Derek? While Cotton’s profile is rising, honestly the only positive thing about seeing him is Ms. Ruby. I mean, the boy is boring as hell.

It all becomes clear why Andy is the way he is. That is, on top of why he competes so hard and has no issues getting on anyone’s bad side – he is adopted. Well, that isn’t the only thing, it is also Mr. and Mrs. Smith not necessarily supporting Andy’s venture into music and really preferring him to stick with the internship over pursuing becoming a singer.

But it doesn’t end there! Another HUGE factor is Mr. and Mrs. Smith are white. Not Star kind of white, I’m talking about porcelain white, especially in terms of socio-economically. In fact, the way Andy puts it, his access to Black culture came solely through music. So music for him isn’t just a hustle, it was his only access to people who look and sounded like him. Making it where the industry has long been his sense of community and that leads to why he has such issues with Star. She is someone who got to be in that community, be comfortable, and seemingly this causes some insecurities in Andy. Of which Star calls out when they do a college show.

Thus leading to Andy to be up to his old tricks. One of the things Star doesn’t get enough props for is how it explores identity and the complexity of it. For Andy, he is a Black man raised in a white household that didn’t expose him to Black people. Not even in a, This Is Us type of way, as Randall got to interact with Black people. The way he makes it seem, if it wasn’t for Black acts like Sammy Davis Jr., he wouldn’t know himself or his people. And that is important to show since Andy’s story isn’t one just made for TV. There are a lot of people of color, and queer people too, who find, growing up, they doesn’t have access, physical, touch me, talk to me, hear me, access to someone who looks, acts, or thinks like them. And you can see in Andy the complex that brought.

But, another interesting bit about that is how Star is so comfortable amongst Black folk. Granted, there are times, like the cookout in season 1, where it can be made awkward for her, but generally speaking, she is acclimated. I mean, in terms of urban Black culture anyway. And it makes me wonder if the show may ever dive back into that? That is, Star being comfortable with urban Black culture and the privilege she has to be accepted amongst the Black folk no matter where she goes. Yet, at the same time, just as easily being able to clean it up and leave them behind for greener pastures.

Does Mess With My Man, My Sister or My Money: Carlotta, Maurice, Jahil, Andy, Angel, Star, Simone, Noah, Alex, Jackson

With Charles Floyd furious about the Sound House pulling out, Maurice tries to save face by calling his ex, Natalie, a regional promoter, to help. Something she does do, but more so for viewers than any of the characters. Primarily by creating an environment for drama. For whether it is the relationship drama she causes; setting up Take Three to be sabotaged by Andy, which leads to Andy feeling the wrath of Star; or triggering a reason for Jahil’s heart to act up, Ms. Knight causes more problems than she brings solutions.

However, while she may have created the environment, and bumps heads with Carlotta, it is Andy who creates the true chaos. Building off what was noted in the second topic, he actively tries to sabotage Take Three and with Ms. Knight keeping her budget tight, he manipulates some kid to embarrass Take Three while they perform. Which, with Jackson, who is acting as a roadie, confirming what happened? Star begins slashing tires and Angel gets involved, making Simone mad when he calls Star a bitch, and let’s not even get into Alex and Noah.

Their situation, now that it is real and out in the open, it brings about Alex’s jealous side and triggers serious daddy issues. But, luckily, while they may not makeup, Simone and Angel remain as strong as ever. Some ground rules get laid out in regards to Star, but there remains open communication and this desire to work things out. Plus, with Take Three getting a second chance to make a good impression, with some Delta steppers, it makes up for what Andy did. 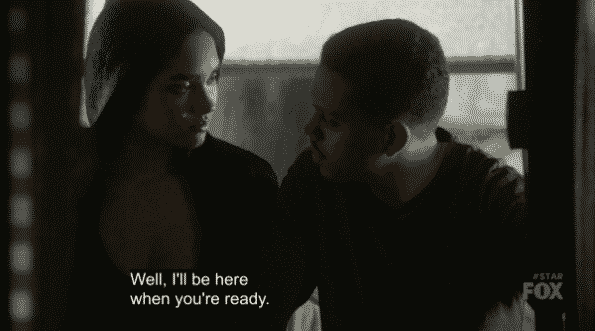 Let’s begin with, considering Jackson saw what was going on, why did he not do anything before the issue presented itself? I mean, I get he wanted to get paid before being part of tour beef but since you are trying to maintain momentum with Star, stepping up when it mattered would have been the best route. But, that thought aside, you have to also wonder what makes Andy act like this? I get it is either make it or break it, and Jahil is his manager for a reason, but it’s one thing to taunt the ladies of Take Three and have a bit of banter. However, messing up their performance? Did Maurice really have to remind Andy that Star is crazy as hell? Had her reputation only circulated in terms of her having sex with people? I mean, she did threaten Ayanna before and, like with Jahil, the manager matches the talent.

Switching to Natalie, while I like Meagan Good, I side eye the existence of this character. If only because her causing relationship drama seems so unnecessary. So much could be done just with her being a promoter in a man’s game and exploring the marketing part of the business. Maybe Carlotta getting jealous and us understanding her past being sassy, low-key thug, big momma. For, as of now, outside of Jahil during the Mixed Harmony days, we haven’t gotten to see insecure or jealous Carlotta. And exploring her vulnerable side more than just in moments of weakness seems overdue.

As for Alex and Noah, is it weird that now that they are being open about their relationship, the magic is sort of gone? I mean, as previews show, they’ll use Noah to bring back Naomi Campbell and address some of Alex’s issues but, reasons to invest in these two is dropping quick.

That is, unlike Simone and Angel who remain so beautiful. Especially because Simone is really taking this wife thing seriously. She is a bit doting, doesn’t let their fights linger, and makes it so whenever ICE may check on them, I can’t even imagine them not finding things to be legit. These two, taking note of their individual issues, are slowly but surely becoming relationship goals – in concept.