Slut In A Good Way – Recap/ Review (with Spoilers) 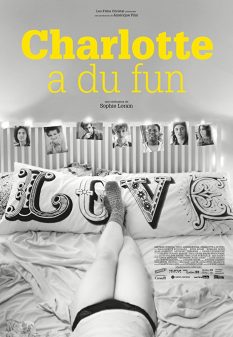 Slut In A Good Way is a forgettable comedy which doesn’t bring anything new to the slut conversation or bring about some sense of sexual empowerment.

17, heartbroken, and crying over her ex Samuel, Charlotte is going through it. Luckily, her two best friends Megane and Aube are there to console her, drink with her, and encourage her to move on. Which, at a place they stumble upon, after running from the cops, a toy depot, they all find a place to maybe find boyfriends for themselves.

That is, until Charlotte, perhaps the most approachable one of the three, finds herself, over the course of a few months, sleeping with nearly every guy at the job. Which wasn’t her intention. To get over Samuel, it was brought up to have a rebound, be a slut in a good way, but somehow she became one in a bad way. Mostly in the form of sleeping with guys who other girls were interested in, but they made nothing official with.

Leading to things becoming a bit contentious at the toy depot, and within Charlotte’s relationships with her friends. Making you wonder, will Charlotte’s liberation and freedom lead to her losing everything she held dear before her sexual liberation? You gotta watch to see.

In this film, most of the characters you may find it a bit of a struggle to remember who is who. The only exceptions being Megane and Charlotte and, to be honest, one of the driving forces behind Charlotte standing out is because she is the lead. Which isn’t to say that is the sole reason you’ll remember her. The way Charlotte is written and performed by Bouchard brings about the vibe that she is an average, everyday girl, who you can imagine having a realistic crush on. Meaning, someone the average guy would actually approach, have conversations with, fun (take that as you will) and maybe end up marrying.

Which is something which drives you to want to invest in her. Especially as her life turns to crap all because, in the process of trying to get over one guy, and having fun with perhaps too many others, she gets shamed for it. And with how protective you may become over Charlotte, it makes you vilify any who would besmirch her name.

Switching to Megane, she is just loveably sarcastic. There is something about her, for films like this, which seems very familiar and the playfulness Denis gives the character makes you wish she shared focus with Charlotte more than simply was the more vocal friend. Plus, considering the way she talks and what she talks about, it also makes you wish she got a bit more involved with dating or talking to the boys to see what she talks about with her girls she consistently put into action.

In a way, Léa seems like possible foreshadowing for the movie. She got pregnant by some guy she barely seemed to know and got stuck with it. But, even with us not getting a lot of time spent with her, the few scenes Belugou has are the ones which perhaps are my personal favorite. If just because they seemed to be the only ones when the film pursued giving depth to a character. Rather than trying to create a comedic or flirtatious moment which lacked any significant meaning.

Who Are These People?

When it comes to character development and relationships, there isn’t much here. What led to Charlotte sleeping with most of the boys gets handled in a montage and the few not handled that way, like with Francis, doesn’t lead to them having a notable friendship. The kind in which we learn enough to see some sort of depth beyond the flirting. But, it isn’t that much better with the girls either. Léa, someone who seems to be in a position of authority, she gets some background and development, but outside of her, Charlotte and Megane, you’ll be questioning who is who? This even applies to Aube who you may not remember the name of until she finally is no longer an afterthought nearly ¾ into the movie.

As noted in the overview, the movie is largely forgettable. It doesn’t provide interesting or unique insight into slut-shaming or sexual empowerment. The characters themselves don’t really have arcs or anything going on. Which can even be said in the case of Charlotte. While she has a storyline in the form of breaking up with Samuel, sleeping around, getting called out, and trying to reconcile, it isn’t that interesting.

Yeah, there are a few jokes here and there and, as noted, Megane and Charlotte are likable, and Léa is someone you wished was involved more, but those things don’t keep you from checking your phone to see when this is over.

While unremarkable the film isn’t bad. It’s just incredibly simple and shallow. Hence the mixed label for while it has a few likable characters, and shows through Léa it could have done more, it didn’t. It just ends up a movie about a whole bunch of teens talking about sex, having it, then getting mad because no one decided to talk about feelings and commitment as well. Which ended up a boring experience in the long run.