For the entire episode, Jada Pinkett-Smith and Gabrielle Union have a heart to heart not just about their issues, but the difficulty of maintaining female friendships, the #MeToo movement, and being wives.

Though never really friends, just aware of each other and peers through being actresses and Black women, Pinkett-Smith and Union two didn’t speak much over the course of 17 years. For Jada, there isn’t an exact reason given why beyond being uncomfortable. However, when it comes to Gabrielle, it was awkwardness. Now, it isn’t clear if the awkwardness stemmed from maybe past things said about Pinkett-Smith or just the awkward silence, but in this episode the silence ended.

Thus leading to Pinkett-Smith sort of hashing out with Union why they both seemed to have issues forming and maintaining female friendships. Well, Union does anyway. Pinkett-Smith admits it was difficult for her but doesn’t necessarily go into the type of details Union has been going into for at least 5 years at this point.

But, just to recap, Union noted in multiple interviews and speeches, like the one linked above, she was a hater. In fact, she calls herself a troll while speaking to Jada because, when negative things started happening in her life, she sought instant gratification from taking the low road vs. the high road. Leading to her eventually hitting rock bottom which, for her, was being under her bed with her dog.

However, thanks to life coach, physical trainer, and actress AJ Johnson, alongside therapy, Union began to address the things which made her unhappy and also the fact she wasn’t sure how to make herself happy.

This felt like a good companion piece to the first episode of Red Table Talk “Motherhood.” Mostly because it addressed a relationship which didn’t need mandatory mending. Jada and Gabrielle weren’t friends, I don’t believe they ever worked together, though Union did work with Will in Bad Boys 2

, and they solely saw each other in passing. Yet, as Jada notes, there shouldn’t be this need for awkwardness when you see your peer in public, or private, spaces. You should be able to embrace, congratulate, be in awe, without there being any sort of issue.

But, as shown by Gabrielle, and expanded upon in other conversations she had on the subject, that was hard at one time. How can you be happy for someone when you can’t even recognize what happiness is like for you and whether you have a modicum of it? Especially as you are losing things which other people are gaining?

Yet, there is the importance of the red table. Being open about your struggles, even if you are still working on them. For in speaking your truth, you are indirectly telling someone what they need to hear and realize.

Now, how do you stop pushing yourself into the victim role? Well, first it is by taking responsibility for yourself. Take note of how, like in Union’s case, a lot of what you say to make yourself feel bigger, better, and more relevant, is exposing your insecurities and making you look foolish. But there is also a need to take responsibility for the people who are enabling this behavior and how they react.

As noted in the conversation, there are some who will say or validate you saying, “You’re keeping it real” when you’re not. You’re just being hateful. And those people have to be dealt with for they are part of the problem. They are impeding your growth. Which is why, like Mrs. Adrienne woke Jada up to her being a people pleasure, likely Johnson had to start pointing out how Union was when around certain people.

For, at the end of the day, the way Union and Pinkett-Smith see it, those people want you to remain victims. After all, if you are a victim, that means they are in power. You need them to validate your victimhood and in the process of that, you empower them and perhaps provide free entertainment. Since you’re the one going off and ruining your life while they get to just watch. 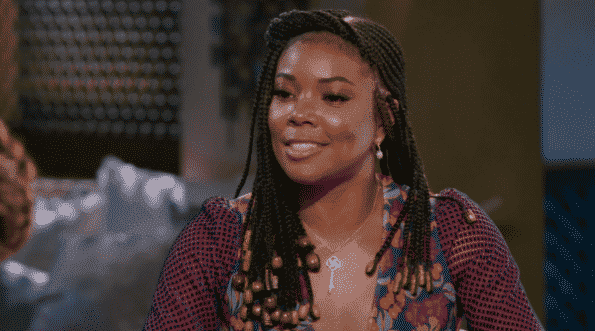 joke – it’s real life. For, as many have said, often times giving your opinion doesn’t add to the conversation but just takes away from your standing in it. You talking about this person, especially if it can’t even be meld into some kind of critique that’s valid, just makes you look small.

Which, if you were like how Union was, being a petty small troll is ideal. You can speak your hate and get that instant gratification. But, the problem is, speaking about the long term, eventually between building a tolerance to those quick hits or people getting tired of your shtick, eventually, you are going to run out of fuel. So you got to prune those who are of no help to you and open yourself up to those willing to tell you the truth in the way you need to hear it.

For while being the victim might be easy, in theory, it isn’t a way to life. It may make sense for when you feel the need to lick your wounds but once they scar over, you can’t keep ripping the scab and expect things to get better. Since that continuous pursuit of validation is either going to attract the worse kind of people or put off the best kind. Making the whole situation counterproductive.

Recognizing the problem, addressing and beginning the steps to break the habits, but what about sustaining that momentum? Well, from what it seems, saying no, setting boundaries, and being willing to lose a few people on the way has to be done. Possibly in that order for saying “No” is the difficult thing. Especially when it comes to friends and loved ones for while “No” is many a child’s favorite world, it becomes much harder to verbalize and be firm with as an adult.

For Pinkett-Smith, it was because she is or was a people pleaser. So saying yes meant other people were happy and, as noted in the “Surviving Loss” episode, it led her to being empty. As for Union? Well, it wasn’t just saying no but establishing boundaries. Since boundaries mean, since I’ve done this work, I need you to respect it and not threaten it. Don’t pressure me to resurrect who I once was, I’m someone much better now. Taking note you are my friend, please don’t take advantage of my time or kindness. You know, basic things.

But, bringing things full circle, as with every Red Table Talk, all things boil down to communication. Pinkett-Smith needed to communicate with Will that in order to sustain this journey into finding herself again, she can’t be everything to everyone and everything for him. Which, because Will is the type of guy he is, it was understood, fostered, and like how Union has just as much a friend as a husband, so does Jada.

However, communication isn’t just about sustaining yourself for your own growth and protection, but as a community as well. Hence why Pinkett-Smith makes it a point to give Union the opportunity to bring up the #MeToo movement. After all, when it comes to the movement, there are times when it seems co-opted and seems to be primarily focused on white women with others just joining in. But, in reality, it is all women, and men too, and a systemic issue, not just something which affects one specific group.

Is it wrong to say I felt a certain type of way the episode didn’t include a reflection of some kind? That is, with Willow and Mrs. Adrienne? Because, I gotta admit, sometimes I feel like Willow and Mrs. Adrienne aren’t necessarily Jada’s equals in this as much as they are her reoccurring guest hosts. You know, to add some different perspective to the conversation or insight.

And the main reason I wished Willow and Mrs. Adrienne was in this was to see the generational perspective. As well as, Mrs. Adrienne following up on Jada noting she was, or is, a people pleaser and her role in helping Jada get out of that. Though, again, with noting how things are largely Jada specific, it does lead me to hope Mrs. Adrienne or Willow get to have one on ones with people as well. Not that it would be a deal breaker if they didn’t but just to make this seem more like a team thing than a Jada featuring her mom and daughter thing.

That’s where you were then, thank god you someplace else now.
— “EP 4: Girls Trippin’” Red Table Talk (Jada Pinkett-Smith)

It’s hard, it’s painful, to recognize you are the common denominator for the vast majority of your problems.
— “EP 4: Girls Trippin’” Red Table Talk (Gabrielle Union)

You have to mourn that death of who you thought you were.
— “EP 4: Girls Trippin’” Red Table Talk (Gabrielle Union)

Being a victim is also comfortable for everybody else. Because when you take accountability for yourself and your own healing, a lot of people lose a bit of control. It’s easier to control a victim than it is to control a healed, evolved person.
— “EP 4: Girls Trippin’” Red Table Talk (Gabrielle Union)

I say no! And no used to be so terrifying because no means a boundary and if you put up a boundary, maybe people won’t come back.
— “EP 4: Girls Trippin’” Red Table Talk (Gabrielle Union)