What is the dream? Who or what inspired it? How can you obtain it? In “My Soul’s High Song” the focus is on what makes a person feel happy or whole. Especially in times when you aren’t necessarily thriving but surviving. Sometimes due to compromise.

With a new editor and sales apparently not what they used to be, Nova is asked to put a pin in her usual stories. He wants good news, fluff pieces, from a hard hitting, local award-winning journalist. Something she is willing to do to keep her check. Plus, considering she has pissed off so many sectors of local government, no one is willing to talk to her. So, what choice does she have?

Which is something Hollywood has been thinking a lot about: Choice. With him quitting the rig but having enough money saved to not worry about finances, he is bored. In fact, the better word would be antsy. So he decides to visit Aunt Vi in her element at the High Yellow and takes note of a woman asking for one of Vi’s Juneteenth pies. Something she does just for the occasion but Hollywood says with the recipe he’ll help the sister who wants it.

That situation leads to a conversation about what their future holds. Not as a couple, because they are stronger than ever, but as individuals. Vi doesn’t want to work till she dies but Hollywood counters that is because of what she does. She fought for that promotion and proved herself. Now she is just working off determination to show she deserved it. But what perhaps she should put her time and efforts into is her own business. Which she has thought about for awhile. Now, as for what Hollywood may do? Well, who knows about that? 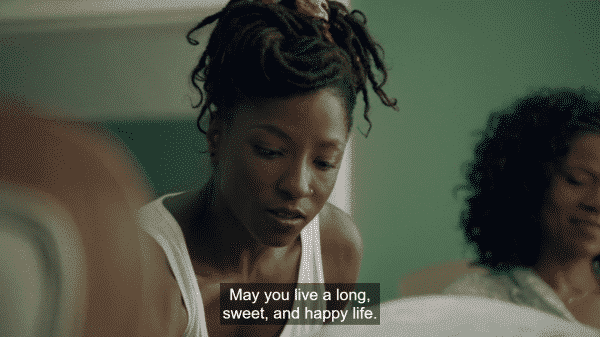 It was nice to see Nova back to her spiritualism.

It’s always kind of weird when we are reminded Nova’s job is a journalist. Much less when we see her work. For while that is what gave her the platform she stands on, it has mostly been made to launch her various stories. If not set up the end to one. But what may happen now with her essentially blackballed from most local government agencies and being asked to write fluff pieces? She needs a paycheck. While she may have made a name for herself, no one is knocking down her door for enough paid speaking engagements to just leave the paper and work for herself. So it should be interesting to see where Nova story goes. Both professionally and personally.

As for Aunt Vi and Hollywood? I honestly skip them sometimes in these recaps because a lot of it is same old, same old. Not in a bad way. More so we get the usual, “This is the type of relationship I’d like to have” and that’s it. Nothing changes in this episode. Hollywood fixes everything in the house and makes sure Vi is good, and she makes sure he is fed and happy. But what made things noteworthy this episode was them talking about the future.

In a lot of ways, Aunt Vi and Hollywood have been here and now characters. When the focus wasn’t their relationship, they were two people who showed up, eased tensions, and that was about it. But with them discussing a future, it should be interesting to see how this is followed up on. Especially as the rest of Aunt Vi’s family have pretty much been innovative in how they got their money, maybe she may take that inspiration and follow suit. Ralph Angel after Micah reacts to Blue surprising him and knocking him down.

From living with Aunt Vi to Ralph Angel, Charley goes from a welcoming place to a slightly hostile environment. After all, while his home is her home, Charley is a bit too mindful of Ralph Angel’s business. Much less, as seen, Blue doesn’t understand boundaries. Being that Ralph Angel babies him like his dad did to him, he kind of gets on Micah’s nerves. To the point that Blue pops up on him and he accidentally hits him.

Something which, you know, sends Ralph Angel into a rage. Of which leads to a trading of insults between him and Charley later on. Such as noting Micah is soft because of his upbringing and all of that. And in that argument, it becomes clear why Charley chose to have her son be around Ralph Angel despite how contentious of a relationship she has with him. She was hoping, with him being the one person in the family who understands, maybe he could break through. For while Micah is doing better, he is still shook 3 weeks after being arrested. And while Charley is very much about having the strongest influence over Micah, she recognizes she needs help here.

But in the long run, it all ends well between Micah, Blue and Ralph Angel. Thanks to an action done by Charley, reminding Ralph Angel that be it business wise or personal, she only has his best interest in mind, apologies are shared. Hell, Ralph Angel opens up about when Micah was born and he sort of looked at him like a little brother. One he didn’t get to see because of distance, but still someone he could have been closer to just the same. As for Micah and Blue? Well, we know Blue only really has Kenya for a friend. So Micah makes sure he and his little cousin are cool and even gives him an art set to use with Kenya. Thus healing that relationship and dispelling the bit of fear Blue had about his cousin. 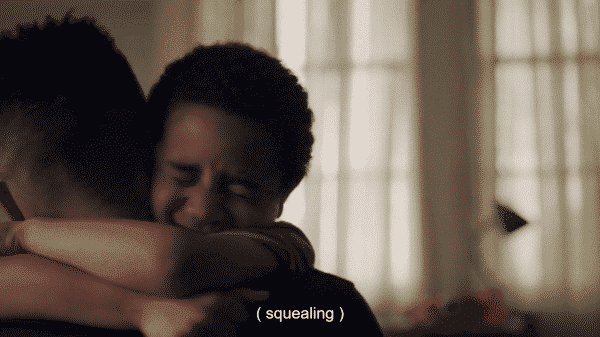 I think, when it comes to all that happened, Blue is the center of it. Not just Ralph Angel not teaching that boy boundaries, like not sneaking up on people. There is also a need to address maybe Ralph Angel’s own insecurities. For, unlike most shows, insults on this show usually come from within. Either something that person is insecure about or something they know will cut deep. So when Ralph Angel was calling Micah soft, I wondered if that was because he maybe was worried about raising his own son that way. Because, you know, Ralph Angel coos Blue. Like when Darla chastised him, he swooped in to protect that boy’s emotions. For, as seen, he isn’t necessarily tough. Yes, in season one he got into a fight and I think bit someone, but he is still a bit of a cry baby. He is soft and there leads to another issue.

While Ralph Angel has accepted his son plays with a doll and defends it, that has alienated the boy. The whole summer, we haven’t seen Blue play with a single person his age. If he isn’t with his family, he is alone and entertaining himself. Which, while not the focus of Ralph Angel’s storyline, or even his interactions with Blue, I think is becoming a growing worry. For on top of having a son he recognizes may be soft, maybe in a Micah way, there is this looming threat of him being soft in a way he can’t always defend. For there may come a day he can’t swoop in and wipe tears or fight Blue’s battles. Which is something that worries him.

Loyalty To Family Before All Others: Ralph Angel, Darla, Charley The cops come to Ralph Angel’s door talking about a parole violation. Being that Ralph Angel is an ex-con, much less with the charge of robbery, naturally, he isn’t supposed to have a gun in the house. Luckily for him, Charley claims it is her and, like Davis did with the cops, she uses her charm to make a bad situation manageable. This save helps remind Ralph Angel that, at the end of the day, Charley loves him and isn’t trying to control or demean him at every turn [note]It also pushes her to find her own place. Something which is a bit of a storyline for her this episode and deals with Remy making her sound bougie. But, long story short, to show she is one of the people she decides to set up shop in the mill.[/note]. So with that, Ernest’s will that he shows Aunt Vi remains in pocket.

Yet, their relationship isn’t the only one which gets stronger. Darla, once again, is given the rare opportunity for Ralph Angel to lean on her. First by paying for Blue to have swimming lessons [note]In high school Darla was all-state in swimming during Junior and Senior year. Which Ralph Angel didn’t apparently know. Leading me to wonder when did they meet again? [/note]. Following that, when whiteflies infect the crops, she is asked to lend a hand. Something she does despite her boss telling her to stay at her station. Thus leading her to get fired.

Leaving us wondering, with Darla now unemployed, how may that affect her sobriety? Much less this independence/ autonomy she was talking about with Ralph Angel a few episodes ago? It was noted in the character profiles for this season that Darla’s focus would be maintaining her sobriety. So, let’s see how she deals with her first real test against it in a while. 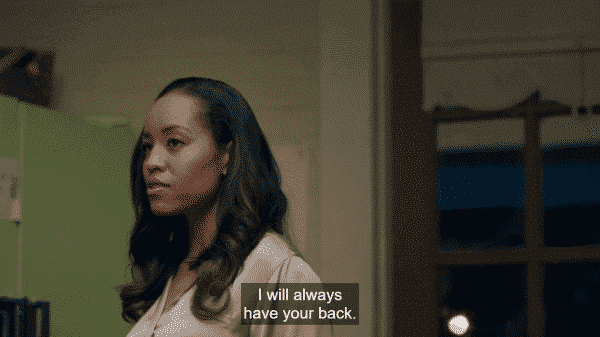 I honestly got a little teary eyed when Charley did that for Ralph Angel. For while I wasn’t expecting her to throw her little brother under the bus, you see a parallel to what Davis did for Micah in that moment. For it was Charley’s charm which got those cops to leave. We already know the Landry family got enough influence that if she wasn’t there, or god forbid Nova, Ralph Angel would have been in jail. So as much as Ralph Angel may have put down Micah’s upbringing and called him soft, you sort of get reminded what that means.

Being soft means being femme. Being more about emotions and feelings than having some wall or your gloves up. Yet, because Micah is soft, isn’t that why KeKe [note]Where she at during all this? I’d love to see her help Micah recover.[/note] likes him? Isn’t it because Davis is soft that he knew how to manipulate those cops? There is a value in a soft touch because starting to yell about rights and all that is rarely the way for Black people to handle situations like this. Unless they are asking to go to jail.

That aside, you know I have to talk about Darla. Now, I don’t want to see her relapse. To me, that would be a bad and very soap opera dramatic move. Something this show usually strays away from. However, she has to struggle. Even if it just the usual anxiety which comes from being unemployed. For Darla, and Bianca Lawson in extension, has escalated expectations. She is no longer capable of just being Ralph Angel’s complicated girlfriend and Blue’s mom. She is someone who has shown herself capable of handling heavy topics, bringing a sense of nuance, and sometimes is in the arena for the best storyline on the show. So, here is hoping she hasn’t peaked.