Wherever I Look
Recaps, Reviews, and So Much More
Home TV Series Pose: Season 1/ Episode 6 “Love Is The Message” – Recap/ Review (with Spoilers)
TV Series

Pray Tell gets center focus as we come upon the final days of his boyfriend, Costas. Though, we also get to see someone try to dust Blanca’s cobwebs.

Table of Contents show
1 The Fall of Stan Bowes: Patty, Matt, Stan, Angel
1.1 Commentary
2 Mama May Get Some Beef: Blanca, Darius, Lulu, Candy
2.1 Commentary
3 In His Final Days, He Made Me Promise To Love: Blanca, Pray Tell, Costas, Judy
3.1 Commentary
4 Other Noteworthy Facts & Moments
5 Question(s) Left Unanswered
6 Collected Quote(s) & .Gifs
7 Highlights
8 On The Fence
9 Follow Wherever I Look on Twitter, Like us on Facebook and Subscribe to the YouTube Channel.
9.1 Previous Episode’s Recap
9.2 Check Out Other TV Recaps

We begin where we left off. Patty has a sit down with Angel and Angel is very upfront about everything. Yes, she and Stan had sex, yes they used protection. No, they did not talk about her but he did say he did love her. The second no comes from Patty asking of Angel to prove she is trans and with that comes the end of their conversation. For now Patty is dealing with the idea she was a beard and she even brings Stan to a counseling session which really isn’t about him talking to anybody. It is just about him listening.

Him listening to the fact Patty isn’t happy, that she still loves him, but she has to find herself. So, with a month left on that lease, she expects him to be in that apartment on his own. This sets off Stan to fight Matt but being that Matt is a better fighting, Stan may get in a few good hits but he is the one who ends up embarrassed. Especially since Stan puts his dirt in the office. Thus leading Stan to run to Angel who may or may not decide to take Stan for another round. Matt: The guy you’re pretending to be doesn’t exist.

I understand Matt and Patty, because of their actors, should be seen as big deals and I’m sure many can find a reason to praise their performance but, I get nothing. For me, they consistently feel like tokens. Just like how in Black majority movies there is this one white person one of the Black leads are with, that is how I feel about Patty and Stan. They exist just so this show isn’t just about queer people of color navigating the world during the AIDS crisis. Those two get to be part of some kind of diversity initiative.

With that said, considering how Stan acts in that therapist’s office, you have to wonder if maybe he does see himself as gay now. That or maybe being pressured as he was, really forced to think about something, and cornered, that is why he broke down and kept repeating “I don’t know.”

But, then again, with him likely fired from his job, or else him going to trek through it awkwardly, and kicked out of his own home, this may be all that was required for him to give himself to Angel completely. After all, the main thing keeping him from her is maintaining his facade. That of a husband and father. However, with the wife gone, and that mean access to the children being cut off, Stan has a certain freedom. One which may lead Angel to take him seriously and may not. It is rather hard to tell.

However, being that no one has taken Stan’s place, be it in terms of time, effort, or giving of affection, maybe he might get another chance. Especially considering what Blanca goes through. For while Angel might be a sex worker, it ain’t just about being lusted over but feeling loved.

Mama May Get Some Beef: Blanca, Darius, Lulu, Candy

We have yet to see Blanca with a man, she barely talks about men, and who knows when is the last time homegirl got some. What is known though is when this man named Darius, a playboy who seemingly got some length, comes around, she gets a little hot and bothered. That is until she realizes he is a village bicycle that Lulu, Candy, and many girls have had. At least the pre-op ones. Since it seems like he is a broke version of Elektra’s man. Which hurts Blanca in a way because his wanna be LL Cool J looking self-made her feel like how Angel feels with Stan sometimes. A feeling which, AIDS or not, she doesn’t want to have be a memory or a fantasy. 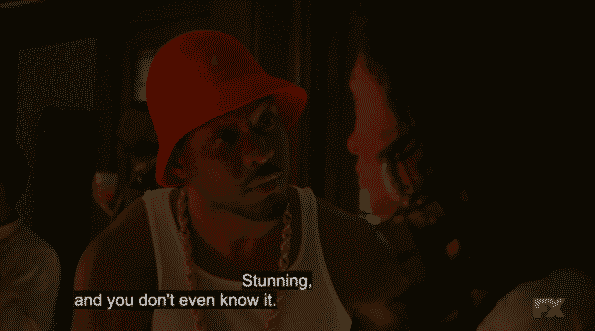 Darius (Charles Brice): Stunning and you don’t even know it.

This was an interesting nod to how trans people are fetishized. Something which, if you have read Janet Mock’s books, she talks about. Especially in terms of her time as a sex worker. How men will sneak off, as Stan did, to have sex with girls like Blanca, Candy, Lulu, but never truly take them out. Bring them home. You know, not just have and make a meal out of them but cook and clean with them too.

And you have to appreciate them addressing that frustration on top of the issue of being with AIDS yet not a sudden invalid. You still have desires and hopes, but this monster always threatens what could be. For even in modern times, with PrEP, condoms, and so much information, hearing someone got AIDS is like hearing they got kids. For many, it is a deal breaker even if they got everything under control and there is no need to worry about a thing.

In His Final Days, He Made Me Promise To Love: Blanca, Pray Tell, Costas, Judy

Pray Tell was going through it. Though, like most adults on TV, he enjoyed drinking a bit, he started to hit that line between being a fun drunk, to a messy, sometimes mean, drunk. Something we got to experience as he read everyone in the House of Evangelista. Leading you to wonder if he was going to out Blanca’s diagnosis. However, while messy, when it comes to Blanca, it seems he can’t be too vicious. For the next day he is apologizing while getting his nails buffed and talking about having a cabaret show for the patients of the AIDS ward. Something sassy nurse Judy inspired him to do.

Leading to Pray Tell and Blanca throwing it down on the mic. It begins with Pray Tell doing a Donny Hathaway song but Blanca brings down the house with “Home” from The Wiz. That is, until she meets eyes with a woman dying of AIDS which throws her off. As if she is seeing into her future. But, luckily, Pray Tell comes with the save and by dueting he is able to distract her.

However, all good things come to an end and after that’s night festivities, Pray Tell is promised to live and love after Costas dies. A promise which, hours after it is sealed, Pray Tell is forced to hold up his end for Costas passes away. Something that, considering all the mourning Pray Tell has done, he takes it in stride. It hurts like hell but with Blanca always there, for better or worse, he finds peace and the potential for joy. 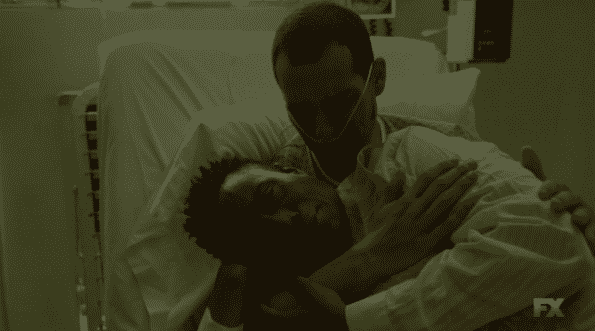 I was not prepared for that musical number, and while Pray Tell’s song was nice, I got blown away by “Home.” For while we hear MJ Rodriguez sing in Saturday Church, she wasn’t SANGING in that movie. In this production, she brought it like she is looking for a record contract or a Broadway gig. Maybe a one-woman show.

But, praise and silliness aside, staring at death was not just scary for Blanca but I’m sure the audience as well. For while there is no guarantees either character, Pray Tell or Blanca, may die anytime soon, it’s not like we see them taking AZT or anything to keep the virus at bay. They just are waiting their turn and outside of when they see people like Costas, they put the disease out of their heads.

Yet, like for them, it haunts us. The possibility, no, what could be seen as the looming fate of these two characters. The ones who aren’t just a statistic or, like Costas honestly, someone you kind of forgot about. We have laughed with these two, cried with them, admired them at their best and rolled our eyes when they were at their worse. And it is in that, us being connected to these two which gets you to understand how devastating knowing members of your community can and might drop like flies. That you can be hugging, kissing, having sex, and just having a grand ole time and one day your partner, be it romantic, sexual, or who you go on the prowl with, suddenly looks emaciated and you get put on notice.

Like Pray Tell, you realize the fun isn’t over simply because you are getting old and don’t fit into some societal standard. No, this disease which came out of nowhere has made it where fun and love could mean death. With either you or another person being the grim reaper. Which, if it is hard for you to imagine, take note of those living with it.

I been out the game for a minute but I still know how to play it. – Blanca

Honestly, Stan’s storyline, outside of Angel, is a necessary evil. On one hand, who really gives a damn about Patty or Matt? Yet, at the same time, they present things for Stan to lose. They represent the toxic masculinity and the coercion to present and go for what society deems as normal vs. being true to yourself with Angel. Someone who, to be with means facing some kind of adversity, giving up privileges and having to accept, to some extent, you will feel an ounce of what they go through. For, as seen due to Patty, even if Angel is visibly a woman and uses their pronouns, she also claims being trans. So, with that, Stan will have to face the assumption he is a gay man. Meaning his love has to be true to take all that on and be with Angel. Especially considering, even if Stan is masculine, being gay, and out, meant all that Stan worked for would be for naught.