As Mr. Inbetween trims the fat and highlights what made the first season great, it finds the perfect balance between Oz gangster and family man.

In the first season, Ray’s personal life with his daughter and brother was a far better selling point than his work with Freddy and Gary, especially outside of the attempts on his life. This season, however, the one-off characters that Ray has to deal with are a bit more memorable, and some, like Dennis noted below, drive you to realize the complexity to Ray’s work as others remind you how there is no retirement plan in what he does. Simply put, he is more likely to work until he is killed than save up enough to just retire and watch Brittany, his daughter’s, children on a ranch somewhere.

They Dropped The Group Therapy Sessions – 85

Ray has a lot of anger issues due to his upbringing and life after being in the military. This led to him having to do group therapy and while it does lead to occasional comedic moments, this season the whole group therapy thing was dropped. Thus leading to more time seeing Ray with his family, his girlfriend Ally, and getting a true sense of who he is.

Ray’s Relationships To His Family, Gary, and Ally – 91 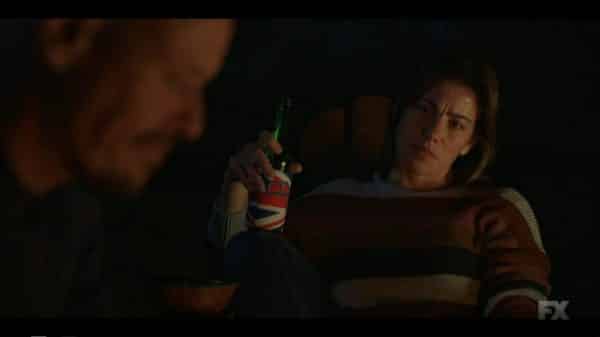 As much as you can see Mr. InBetween as a crime drama, what it truly is, is a comedy. A dark comedy, yes, but between Ray and Gary talking about the best version of James Bond, Ray, and Ally teaming up to give Brittany the sex talk in episode 3, or Bruce busting Ray’s balls sometimes, this is a comedy. Yet, you also have to appreciate the more intimate moments as well.

Take Ray and Ally’s relationship, early in the season, when Ray is talking about his childhood trauma. You aren’t led to believe this is the first time he has done so, but you can tell this is the first time in a long time he has had a meaningful conversation like this he wasn’t forced or awkwardly coerced into. And it is through Ally we see Ray in his purest form. Particularly since, with her, he isn’t so much focused on surviving and doing what he has to in order to provide for himself, his daughter, and take care of his brother. We see him thriving in ways that he doesn’t when she isn’t around.

And it is in showing that survival mode and then being able to flip things to be this family man which shows you why Scott Nash is the perfect lead.

While Ray has a wonderful arc when it comes to his relationship with Ally, it’s his arc with Bruce which will bring you to tears. Primarily since you can tell Bruce is on his last days and is just trying to hang in there so that he, as well as Ray, can reconcile with their father, he can spend more time with his niece and also prep his brother for what’s coming. For, by the end of the season, Ray doesn’t have all that much, so losing a major part of his life, the only one who was there for some of the worst moments, who doesn’t have to hear an explanation but just know, it kills him inside. If not, better put, it kills a part of him.

So as you watch Bruce get worse and worse, it chips away at you, probably like it does Ray, until you’re just a mess.

Generally, the people Ray gets assigned to kill or intimidate don’t say or so anything which makes them worth remembering. They are bad people, owe someone, they admit it, and so they get what is coming to them. Dennis, on the other hand, he was the rare exception. If only due to there being some ambiguity, at first. For with him, it wasn’t 100% clear if he did to that man’s daughter what he was accused of or because he did it in the past, he was bearing the weight of his former choices.

With that, you got to see how deep the episodic characters could be, and while that was the only one they did that with, it was still nice to see.

Outside of Ally, there aren’t necessarily any consistent female characters over the age of 18. Which made the entrance of Mandy, someone who works at Freddy’s club, who can fight, and Kate, someone doing research on men like Ray, of interest. However, Mandy doesn’t really evolve into much, despite a scene of her knocking the hell out of someone and getting your attention. Then with Kate, despite Ray, with hesitation, opening up to her, it becomes a weak replacement for the group therapy that doesn’t really illuminate who Ray is as much as showed how much sway Freddy had over Ray at the time.

Honestly, this season exceeded expectations by figuring out how to make the mobster side of Ray as interesting as his personal life. Which, after the first season, didn’t seem like something which would happen since, for some, I think the show figured that is the hook. Yet, while many of the people Ray went after you won’t remember by the end of the season, be it Dennis or Vinnie, there are signs the show can either pursue a character long term or make them more than someone who pissed off the wrong person. Making it so, while they aren’t equal to Ray’s time with Ally, Brittany, and especially his brother, you weren’t left feeling they were liabilities either.

It isn’t clear where the show could go from here, considering Bruce’s demise, Ray being fired, and now him not only lacking protection but also a booker. However, in that freedom and the vulnerability which comes with it, could allow us to see some type of endgame for Ray. After all, the show has followed what could be seen as a three-act structure, so one more season for a proper conclusion would only make sense.

Mr. InBetween is probably one of the best shows focused on someone in a crime organization, that isn’t focused on someone who is the boss or is trying to work their way up the ladder. And through its balance of showing how the underworld works combined with the everyday pursuit of being a father, a brother, a boyfriend, and just a plain old friend, Scott Ryan shines and pushes you to become a fan.

They Dropped The Group Therapy Sessions - 85%

Ray’s Relationships To His Family, Gary, and Ally - 91%