We have come to a point in Runaways where it has perhaps come into its own. Though I could be speaking too soon.

Table of Contents show
1 Previous Recap: Episode 7 “Refraction”
2 The Truth About Amy: Nico, Alex, Amy
3 We Got To Talk About Victor: Janet, Jonah, Tina, Robert, Dale
4 Backtracking: Molly, Chase, Alex
5 Question(s) Left Unanswered
6 Highlights
6.1 Everyone Was Good
7 On The Fence
7.1 So, About Amy
8 Catch Up or Follow Along: Here [External]
9 Follow Wherever I Look on Twitter or Like us on Facebook.

On top of knowing Tina’s password, it is revealed that Alex also knows more about Amy than he let on. Which should come as no surprise for while Amy was older than the rest of the group, her and Alex were pretty close. They bonded over video games as a matter of fact. So him not showing up at her funeral is very perplexing but after two years, he reveals it is because he felt guilty.

In his mind, he might have known enough to maybe have kept her from allegedly committing suicide. He saw that Tina was hacking her, after Amy tried to hack Tina or Wizard, and maybe with some reassurance, he could have stopped her from hitting her fate? Well, maybe. For Kincaid lets on that Tina knows and with it seeming Amy hacked Wizard before Alex did, it seems her trying to do as they did now may have been the end of her.

Question is, who was the one who warned her that she had to leave her home immediately? Also, considering how thorough Tina usually is, could it be between Kincaid and the other associate, the crooked cop, maybe they’ve been working on taking down PRIDE? Could it be there is a mole beyond the children? Well, even if there was, thanks to Chase, all of Alex’s work is for naught.

We Got To Talk About Victor: Janet, Jonah, Tina, Robert, Dale

With Victor shot, and neither Stacey nor Dale being medical doctors, so comes Jonah with the idea of reviving Victor the way he gets revived – with a sacrifice. Of which he volunteers Janet for since she is the one who shot him. Thus leading to a “Who is or Who isn’t Expendable” conversation. Of which Janet throws Dale under the bus, for reasons I don’t understand, and it leads to a whole lot of back and forth until Jonah gets weary and starts threatening everyone’s kids and so Janet decides to take the heat. However, being that Robert failed one kid and sort of the second one too, and he doesn’t want to watch Janet sacrifice herself, he gives himself.

Thus leading to Tina destroying the box for it is one thing to sacrifice other people’s lives and things, but her? Nah, she lost a daughter already so even if her husband doesn’t love her as she wishes he did, she isn’t at that point to just hunch over the idea of letting him die. This leads to a major issue for now all Jonah can do with Victor, the only one he truly needs at this point, is put him in some kind of stasis while he determines the next move. 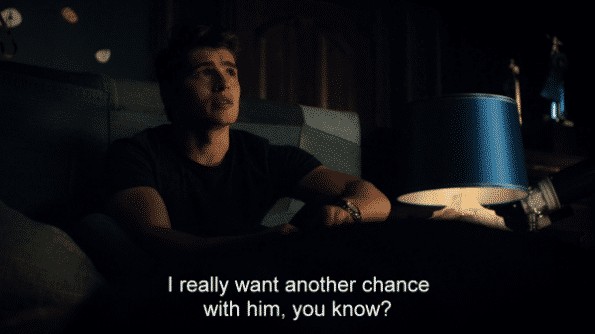 Chase getting a taste of what his father could be, fairly consistently, makes it so all of Alex’s decryption of the Wizard documents doesn’t matter to him. He needs PRIDE to continue to exist in order to continue his relationship with his father and get this ideal comradery he only got a taste of. So, with that in mind, he destroys Alex’s laptop and gives not a single care how everyone else feels about it.

Meanwhile, Molly is with Graciela and learns her parents left her a key to something. Which, naturally, Graciella wishes to come along to see, for she is now Molly’s guardian. However, Molly isn’t going to wait for her. Yeah, Graciela is nice and Molly could adjust to being under her roof, but the girl is still in the process of reclaiming her autonomy since the rest of the group wants to treat her like some other.

I’ve personally found the show lopsided for most of the first season. Tina was holding it down for the adults and Nico and Alex’s relationship was the only thing truly worth noting on the kid side. Well, Molly as well, but only because the actress has spunk. Sort of like someone you’d expect to be the lead on a Latinx Disney Channel show.

But in this episode, I think everyone was allowed to play to their strengths. Alex and Nico, as usual, played off their interdependency of one another for some form of normalcy. Chase’s love for his dad brought out a realistic performance for the actor and though Gert and Karolina remain far from my favorites, they were given to us in well-made dosages. Just enough to keep them relevant, make them feel like part of the group, but even with Gert’s eye-roll inducing voice mail, she could still be appreciated. Same goes for Molly of course. A character which I don’t think could be played better at this point. I truly think the actress could have a very interesting career, for reasons I just can’t put my finger on yet. Though, with that said, I need to see her in a YA novel adaptation.

Then when it came to the adults, yeah Frank got the short end of the stick still, and Victor just laid there, but you had to love the jolt Janet and Robert got this episode. Arguably, Geoffrey and Catherine, while infrequently featured now, they are set up and rearing to go. Tina, we don’t even need to talk about. Jonah, still a bit of a mystery but he is the puppet master. At this point, I’m cool with him just showing he pulls the strings and if anyone thinks of snapping them and running, good luck!

Leading to the four who have kind of been lacking. Stacey and Dale have the same appeal as Molly, but without youth to back them up. They are adorable, kind of awkward, and given to us just enough to not become annoying. However, with Janet stepping up and coming at Dale’s neck, also them handling Victor bleeding to death, they sort of evolved from seeming like some mad scientist duo that got kicked off the Disney Channel. They started to assert themselves as adults and even just looking at them dropping off Molly, that display in emotion showed they are more than these two really corny characters who often just seem like the comic relief.

Leaving us with Janet and Robert. These two have been the spouses easily forgotten and only Frank’s existence keeps them from being at the bottom of the barrel. But, we get to see a whole new side to them this episode. Janet coming for Dale, trying to throw him under the bus, that was a bit of a shocker. No longer was Janet playing this woe is me victim, the sad but dutiful wife, she was fighting to stay alive and I was living for it!

Lastly, with Robert, while he remains but one up from Frank, I liked they he finally got through his head Tina truly does love him. Yeah, she is a loyal member of PRIDE and forever thankful for whatever exactly Jonah did for her and her family, but she got love for him too. Even to the point of maybe pissing off Jonah to keep him alive.

Amy finally gets to speak and honestly, I feel like this was long overdue and Amy needs to be around for at least 1 or 2 more episodes. I get it, the main point of her showing up is closure for Nico and maybe to help build up Alex a bit. However, with her being the key to the first attempt to takedown PRIDE, being the reason Tina and Robert have issues, and one of the major things which broke up the kids, one episode just doesn’t seem good enough. There needs to be her funeral, how she really died, and some sporadic scenes sprinkled in showing her gaming with Alex, interacting with her sister and family, and maybe cracking jokes on the kids.