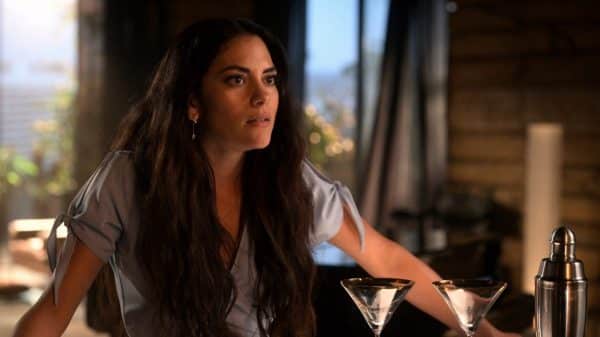 Just as it seems things may settle to how they were, plus Eve, a bomb gets thrown in which simply can’t be ignored.

While being a whore has long been a comfortable means of engagement for Lucifer, with Eve assuming she and Lucifer are a couple this disturbs him a bit. Particularly his libido. Not in terms of him getting erectile dysfunction but certainly not the same stallion he usually is. So when he checks with Dr. Linda, her conclusion is that Lucifer needs closure. Leading to him seeking retirement from working with the detective, thinking ending their professional relationship may help him begin a personal one.

But, before that happens, Amenadiel has some conversations with everyone about Eve. He reminds Lucifer that Eve might be looking for the Garden of Eden version of him, which he denies. Amenadiel reminds Eve that she is immortal and when she died again, she will be judged and rejecting the Silver City means the possibility of ending up in hell. Then, when it comes to Chloe, he pushes the idea that Father Kinley’s prophecy is hogwash as nothing of the sort has ever been foretold or predicted.

You Dropped A Bomb On Me: Lucifer, Chloe, Eve

In this episode’s case, Lucifer and Chloe struggle with doing things in a way which will truly put a nail in their working and likely personal relationship – especially towards the end. However, just as things seem like they might be over, as both are subdued by a man with a bomb, followed by his ex-wife, Chloe saves the day and just in case she was wrong, she leaps on top of a shot Lucifer to protect him. Which pushes him to a few decisions.

The first decision is that he will still work with Chloe, despite their past. Following that, taking note of how attentive Eve was when he was dying, Lucifer also decides to make his relationship official with her. Leading to a rather dangerous decision, on Lucifer’s part, of revealing that Chloe makes him vulnerable. Which, with the way Eve reacts, likely will mean her trying to remove Chloe from Lucifer’s life if not kill her.

Sometimes, when someone has real feelings for someone, and it doesn’t work out, they shut down to anything new until they can deal with those leftover feelings.
— Dr. Linda

Ella Has Officially Lost Her Religion

Ella saving the day isn’t noted in the recap, but between Chloe moving the bomber so they couldn’t detonate the bomb and Ella disabling said bomb, that’s what kept everyone from dying in Lux. However, after everyone’s evacuated, Ella renounces her faith, and I must admit I feel torn. A part of me is a bit shocked and wishes they developed her journey out of religious beliefs further yet I also recognize all that can be done thanks to her becoming atheist.

First and foremost, it makes her eventually learning about Lucifer all the more of a shock when it happens. Secondly, it pushes the idea that Ella is a good person simply because she is and her faith wasn’t required to do so. But, whether or not this subplot is made to be more than a passing thing is anyone’s guess since Ella pops in, out, and barely feels connected to anything.

Is Eve Going To Become A Psuedo-Villain?

With Father Kinley’s prophecy becoming mute, at least if we are to believe Lucifer was going to be the evil one, so comes the question if Eve may pick up the slack? Yes, she has no powers, and we’re told she is completely mortal. However, considering Linda’s baby situation is new and questionable, who is to say what people think they know about Eve isn’t assumed?

I mean, how many mortal beings leave the Silver City or even think about doing so? Much less, with Eve being one of the first, even if made from Adam’s rib, surely there is something about her more magical than the rest of humanity? The rest are, if I understand correctly, would be products of incest after all.

Ella Has Officially Lost Her Religion - 75%

While Chloe and Lucifer making up comes rather swiftly, with Eve’s subtle jealousy and learning Chloe makes Lucifer vulnerable, we may have a villain to replace the now absent Father Kinley. Making for what could be an interesting second half of Lucifer’s 4th season.