Lucifer returns, and outside of some cheeky action, it’s largely the same – and this is perhaps the rare occasion using such a phrase is a good thing.

From what we’re told, it has been a month since the season 3 finale, and since then Lucifer has shown up to crime scenes, hoping to see Chloe, and left when she didn’t show up. However, she randomly reappears, back from Europe apparently, and jumps into things like nothing happened. Which of course is a bit alarming for Lucifer since, with Chloe seeing his devil face, he was expecting more of a reaction out of her. You know fear, screaming, rejection, avoidance, yet he gets nothing. 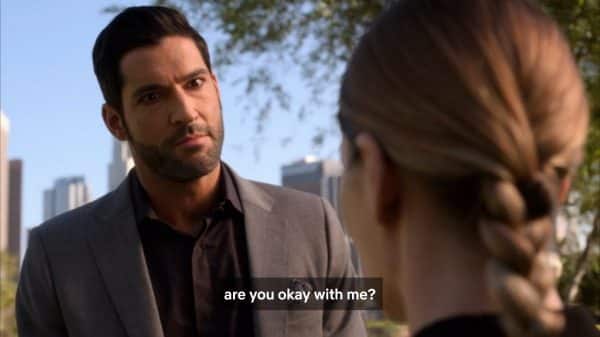 This leads to him talking to Linda about it and her trying to help, but with Lucifer so badly wanting to be rejected for his demonic side, he pushes and prods a bit.

But, he isn’t the only one having a hard time with the truth. Maze is struggling as well with how mean she was to Trixie to the point of seeing Linda as well and Amenadiel is having a problem with no longer feeling at home in “The Silver City.” Leaving nearly everyone a bit discombobulated. Well, except Dan who, with Charlotte’s death, hates Lucifer and is just plain moody.

Despite how fine Chloe tries to seem about what she saw, and her sudden trip to Rome, it seems she is playing a game of sorts. For example, she tells Maze that Trixie doesn’t want to see her but after Maze apologizes the kid embraces her like it’s nothing. As if she, in demonic fashion, doesn’t do grudges. So perhaps the real issue here is Chloe. Someone who flinches when Lucifer touches her and despite enjoying Lucifer’s help on a case, perhaps finding it funny when he tells Ella he is the devil and her not believe, there is something there.

Chloe Has A Secret: Chloe Specifically, as Lucifer hid himself, Chloe is now hiding herself. The thing is, what is she hiding exactly is hard to say. However, with her going to Rome, and now making friends with a local Catholic priest, so comes the question if Chloe is friend or foe now? Also, will she take advantage of how Lucifer gets weak around her?

Cheeky, But Still The Same

Outside of seeing Tom Ellis’ ass cheeks, pretty much it seems Lucifer is as it was before. Our demonic characters, as evil as they should be, still have hearts, emotions, and seem more about love than violence or vengeance. I mean, Lucifer’s daddy issues still has him thinking if people know the truth about him he’ll likely be rejected. Leading you to wonder if Ella ever does know the truth, what will she do? Then, with Maze, over something as innocent as a child loving her, it brings about guilt for she adores Trixie and their connection.

All the while Linda is trying to manage counseling otherworldly beings, and deal with them being too comfortable around her, Amenadiel is in his usual mindset of feeling conflicted and Dan? Well, he is clueless, emotional, and all things which make him, as Amenadiel says, the most human person we know. But, as for Chloe, something has clearly changed. While she wasn’t an atheist before, if I recall correctly, her going to Rome, speaking with a Catholic priest, and seeming like she will try to banish Lucifer is quite interesting. Especially since, of all people, she may have the power to do what Amenadiel and so many others failed to do. The question is though, how will Lucifer discover what she is capable of and would he kill her to stay on Earth? Lucifer returns without skipping a beat, and while it tests the waters of not being on network TV, it doesn’t decide to suddenly let loose. Just show an ass cheek and keep in line with what made everyone’s favorite literary villain so lovable.