Issa finds herself in a place where her voice and abilities are valued and while unfamiliar territory, she is getting comfortable with people taking her seriously.

We Got Trouble: Issa, Joanne

Table of Contents show
1 We Got Trouble: Issa, Joanne
1.1 Commentary
2 Put On Notice: Issa, Kelli, Daniel
2.1 Commentary
3 Humble Yourself: Jada, Daniel, Issa, Khalil, 5even, Spyder
3.1 Commentary
4 Question(s) Left Unanswered
5 Highlights
6 Follow Wherever I Look on Twitter, Like us on Facebook and Subscribe to the YouTube Channel.
6.1 Previous Episode’s Recap
6.2 Check Out Other TV Recaps

After Issa taking the initiative to learn why so many schools are dropping “We Got Y’all,” Joanne is freaking out and calls for a meeting with everyone. Leading to them strangely revealing they did have some kind of issue with the logo and they aren’t that relatable. Which leads to a bit of a side eye since it seems, collectively, Issa has probably said everything they did but them saying it now makes it matter. Leading to her following up, after the meeting, noting they need a more diverse group because her, a gay did, and someone racially ambiguous isn’t enough.

You’ve heard of mansplaining and now we got… race-splaining? I’m not good at making up words but you got to love how Issa saying this didn’t seem like a big deal till it got co-signed by people who aren’t her. Now, one could say it is because Issa messed up in the field so trust of her just wasn’t that high. I could understand that, but with everyone saying the stuff I could swear Issa said, but now it is valid, you got to raise an eyebrow to that. Especially with that meeting ending with her looked at as some messiah showing she was always right.

Making you wonder, even though I know everything shouldn’t be politicized, and Issa, the character, has no desire to speak for all Black people, or all Black women, is this her nod to Black women usually being right but not listened to?

While Issa is actively looking for a place, she is consistently denied. Reason being, her credit score is 425. How did that happen? One could only assume it is the occasional parties she goes on getting out of hand. That’s the only thing I can imagine. But, as for Kelli’s part in this? Well, she decides she has to be real with Issa since no one else is – she can’t afford to be on her own right now. And as a true friend, she offers some help just as long as she doesn’t have to sign anything. Because she isn’t trying to have messed up credit too.

And with Kelli saying that, and Daniel talking about his girl not being fond of Issa there, Issa gets put on notice. So no more freeloading. She cleans, tries to pep Daniel up so that he’ll never mind his friend 5even and try to meet this rapper, Spyder, on his own. 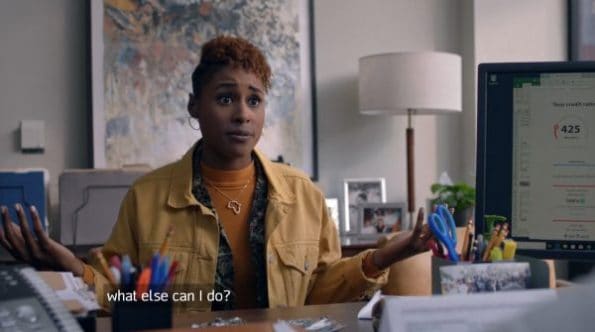 Issa: What else can I do?

Based off her conversation with Kelli, has Issa really been eating out that damn much? Well, let’s take into consideration we rarely see Issa, or her friends, eat home-cooked meals. If they aren’t going out they are usually ordering in. The fitted caps though don’t make sense since when is Issa not showing off her latest hair design? Though, maybe that is also why she is broke for getting your hair done is not cheap – unless you are just having it cut down to the scalp.

With that said, isn’t it weird Issa has kind of become the bum Lawrence was, aside from having a job? She wasn’t cleaning anything, contributing to the household, yet was getting low-key upset with Daniel about smashing some girl. What type of household did Issa come from where she expected to be treated with some kind of respect when she didn’t do anything but eat, sleep, and simply take up space? Heck, the fact Daniel even heard her out about the sex, even let her have his space to herself for a few days showed this man got some real deal feelings for her. Something got him sprung – even if he is having sex, and what may or may not be a relationship, with other women.

From what it appears, the main people who listen to Daniel’s beats are 5even, and Daniel’s niece Jada. Which, as shown by 5even taking advantage of Daniel, might not be making him much money. Yet, he keeps bringing up this dude Spyder, some upcoming talent, that he is going to introduce Daniel too – hasn’t happened yet though.

However, 5even does drop that Spyder is going to be at some club but Daniel doesn’t want to go when 5even drops out. Issa though, with her trying to earn her keep, volunteers to help and she pretty much becomes a big asset. First, by her connection to Khalil, who also makes beats, and went to high school with Daniel and her, he gets them in. Following that, Khalil also helps Daniel get an introduction to Spyder. An introduction Daniel kind of blows but Khalil seems genuine in hooking up and doing something.

Problem is, Daniel got pride. For there is that usual issue of wondering why they got famous and I didn’t? Especially if one is under the impression they are better than the other. But, at this point, at his age, he realizes he can’t expect his talent to be like honey that will attract who he needs. He has to go to them and look beyond 5even if he wants to get anywhere. So, he swallows his pride and hits up Khalil. Leading to Issa getting the reward, for being so helpful, by getting to sleep in the bed. 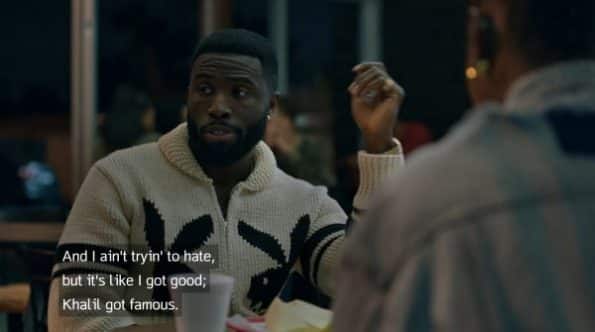 Daniel: And I ain’t tryin’ to hate, but it’s like I got good; Khalil got famous.

While Insecure is largely a comedy, it also has a lot of teachable moments you have to appreciate. Take this Daniel situation. A lot of us work on our craft, either at work or career-wise, and yet wonder why aren’t we getting anywhere? How come this person gets opportunities I don’t, even if I feel I’m further ahead than they are in this area or that? Well, as shown by Daniel, a lot of the time it is because you didn’t say anything. You didn’t use what network you had to connect with others who could push you ahead in your aspirations.

It even shows with Issa at work. Part of the reason she did so well at the school she was in was she used the natural network Black people have in which, some of us, look out for one another. Problem is, her hook up really was just looking out for their people. Yet, as seen by her current position, she, once again, is forced to speak out if she doesn’t want to sit and wallow in misery. Yes, Frieda got the job you wanted. That sucks. However, it doesn’t mean you can’t find a way to show you are an important member of the team whose voice not only deserves to be heard but can find another avenue to get the money you deserve. You just can’t expect good things, be it advancement or money, to come to you just because you vent to the same people you do every day. You’re a human being. Communicate. Otherwise, most people will either think you are okay with how something is or not even know something is wrong.