It has been a week since the 2nd season finale, so let us look back at one of the top things the series has presented: Teen relationships.

As noted in season 1 and season 2 reviews of Andi Mack, when it comes to the relationships presented, particularly those Andi, Jonah, Buffy, Amber, Cyrus, Iris, and Marty experience, we get a multifaceted do and don’t of teen relationships. All without the after-school special vibe. Instead, it is laced into the story in such a way where you can see what should be seen as acceptable and what should not.

Take for instance Andi’s relationship with Jonah, in the first season. Andi pretty much pours a huge amount of her time and effort into befriending Jonah. For whether it is joining his Frisbee league, making him a bracelet, or even helping him pick a gift for Amber, who is quite mean to Andi, she does more than enough to at least secure friendship and expected reciprocity. However, what does Jonah give back? He takes note how interesting her life is, as Andi deals with learning his sister is his mom, and when she needs him to show up to protest an unfair school dress code, he makes it seem like it isn’t a big deal. In fact, he is perturbed by the fact it could ruin the yearbook picture for his Frisbee team.

This whole saga, which ends with Andi realizing that maybe she and Jonah were never really friends, is so important. For there is usually this narrative of finding something they like, and getting into it. Molding and conforming to their habits so that you can be welcomed and an asset. Yet, in the same conversation, you don’t hear about the signs that you need to quit. That the potential relationship is a no-go for they aren’t even capable of being the type of friend you need. So Andi taking a stand-in episode 11, not only is that a high moment for the series, but it is also one for teen television. For enough becomes enough and Andi puts her feelings, those separate from her crush, first and foremost. Putting him on notice that he has to earn and deserve her time and affection. Which, for a good part of the second season, is what he does.

But, it goes both ways. Alongside showing us how girls shouldn’t bend over backwards for some boy, through Jonah’s relationship with Amber, we see what can be considered an abusive relationship. Amber may not hit Jonah, but she tries to isolate him, belittle him, may have cheated on him, and puts him in a position to excuse her actions. All the while, he isn’t happy.

Again, we get something few shows, especially dealing with tweens/teens don’t venture into exhibiting. How to spot unhealthy relationships and maybe even understand if you are in one. For as much as it is noted that Jonah wasn’t a user when it came to Andi, for she didn’t really voice expectations, we were shown it isn’t just bad people who take advantage of others. Then with Amber, we got shown that someone who is insecure, manipulative, verbally, if not also emotionally abusive, who makes you feel down about yourself, that isn’t someone you should be with. Whether you are a boy or girl which is especially a big deal since, a lot of the time, shows which deal with emotions and drama this program does, stars and focuses strictly on a girl or women’s perspective. So Jonah getting to show what guys shouldn’t allow themselves to go through, gave everyone something to learn from.

Also, before we end this section, can we also note the show gave Asher Angel the space and story to show his pain over the breakup with Amber? For while the relationship, as noted, was unhealthy, it was a relationship nonetheless. Something you have to mourn the end of, heal from the damage of, and pick up whatever lessons learned so you can do and be better in the next one. Something, again, outside of movies, doesn’t really get shown much for guys. Especially those Jonah’s age.

Yet, there is also the positive examples the show gives us. Take Cyrus and Iris. While not a couple which lasted long, they got together, thanks to friends matching them up, and when it was realized they wouldn’t work, it ended amicably. A clean, drama free, breakup.

But building up to the best example, we also had how Jonah tried to redeem himself in season 2. Note: It was rough, because he had to unlearn all he went through with Amber, and understand Andi’s expectations were far different from Amber’s. But, it is in that, knowing and communicating what your partner expects out of you, as a boyfriend or girlfriend, which are important. That is alongside a mutual effort to make sure the person is comfortable enough to even speak their needs. For there came a point, when Andi laughed at Jonah, he just shut down. Which could be seen as childish but it also brings up the idea of baggage. Even at this age, if it isn’t from a relationship it could be because of parents that doing or saying something makes them shut down. And on the topic of communication, as well as expectations, you also have to be prepped for the awkwardness of both. Take Andi trying to confirm if she and Jonah are even dating. As shown in many an article when it comes to people far older than Andi and Jonah, that is a major problem. Yet, with a simple question, you can get an answer. One you may not like, but compare that to all the anxiety and self-doubt Andi experiences, would you prefer an awkward moment or days, if not weeks, of freaking out?

Leading to the need to bring up Buffy. Let’s just begin with her bringing up the idea that maybe Andi wasn’t ready for a relationship. The idea needs to be brought up because many of us operate on the idea that I need to do this or that by this age, I see my friend or peer doing this, so why aren’t I, and etc. Yet, with Buffy not only saying, but maybe even giving Andi permission to say she isn’t ready, she was given an out and a sense of understanding. For, in a way, Buffy wasn’t ready at the time.

Thus bringing us to Marty and Buffy – the star couple. Similar to what we see with Walker and Andi, in season 2, Marty and Buffy connected because their interest in each other wasn’t shallow. It went beyond someone being cute but more so them being compatible and also into the same things. Now, did Buffy put his sneakers in the toilet and also had a good part of their relationship rooted in competition? Yes.

However, in time they realize they like spending time together. To the point that, in the season 1 finale, despite Buffy wanting a race to prove she is faster, she comes to the realization that is not what she wants. What she wants is to continue the banter and fun they have and it isn’t clear, with how they both are, if having a race could end that. This spills over into season 2 when competition remains what connects them yet also tears them apart. And while Marty and Buffy are the star couple, it isn’t just because they had something in common and could communicate how they felt rather freely, but because, even with all that, the idea of not being ready still existed. 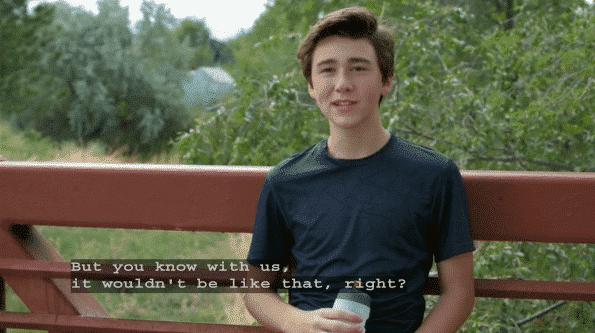 Showing, even if it seems the planets align, and other romanticized ideas, it doesn’t mean you should do something you aren’t ready for. Just because they see something and you do too, that doesn’t always mean the next level should be pursued. It takes two to be in a friendship and two to make a relationship work. But, if both people aren’t all in, then it is doomed to fail. And while Buffy notes, when she hears about Marty finding someone else later, she is a tad upset, at the same time there is a need to note, people can’t wait forever.

Which may be a bit of a bummer to end this all on, but the gist is: Relationships are complicated. Easily you can lose yourself to a crush, if you aren’t careful, and even if in a relationship, there is reason to make sure you are happy and communicating if you are not. Otherwise, how will the other person know? How will they know what they need to change or improve if you don’t say anything? Also, there are many ways to deal something coming to an end. If it isn’t working out, it won’t also lead to a big blow up leaving you bawling tears and things of that nature. The other person might have felt the same way but wanted to power through it. Leaving you both unhappy.

Also, sometimes you just got to admit that the other person won’t allow things to get better or, you just aren’t ready to change the way things are. Which can hurt, especially if you were invested, but is a necessary part of growing up. You are going to fall for someone and maybe get hurt, or find the love of your life. Sometimes, the person who seems like the one you just aren’t ready for or they aren’t ready for you. And while it may be difficult to deal with that at the time, nearly everything presents itself as a lesson.

And continuously Andi Mack shows the various ways you can navigate love and the lessons it teaches us. This is alongside many other topics the show goes into from reconciling with parents, seeking out help, and so much more. For while this show may not be the first to deal with young relationships, I’d argue, in modern times, it is one of the best.