Up to a certain point, you may think that everyone maybe getting their situations together. But, in the long run, happy and functioning people don’t keep shows running.

Molly is back in therapy and part of the reason she is seeing Dr. Pine is because things are going well with Quentin (Lil Rel Howery). Someone who isn’t her usual tall, light skinned, with a touch of F*ck boy type. Instead, he is caring, not that aggressive, supportive as she seeks out may be leaving MJ&S for the Hayword firm. It is like, he wants a healthy relationship with her and she doesn’t know what to do with that. Hence why, when Dro texts, she gets out the lingerie and sleeps with him. Something which hopefully will be addressed the next season in a session.

Things were going well with Aparna. She got him to run a marathon, she is pushing him to work on this other person’s app to learn the ropes so he can one day launch his own, and things are going well. Then he learns Aparna had sex with their co-worker Colin. With that, it triggers Lawrence’s trust issues caused by Issa. Making it so when the boys, Chad and Derek [note]Whose wife, Tiffany, may have had something going on. This Reddit about what exactly, especially considering her pregnancy, is quite noteworthy. [/note] weigh in, he finds himself more insecure than ever. To the point, he may have screwed things up with Aparna. 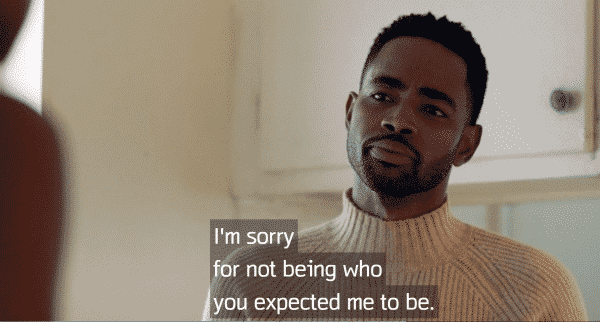 Issa’s life is a bit in shambles, especially when she compares it to everyone else’s. Tiffany is married and pregnant, Kelli is out here running 9 miles during a marathon, Molly is getting attractive offers for new work and Issa? Well, she is moving out of her place. It may not be on the same level as everyone else’s life progress, but it is something right? Right?

Well, if only her trying to find a new place to live was the only issue. She reveals to Joanne what happened with VP Gaines and her trying to host a Saturday session for the Latinx/Hispanic kids sets off a red flag. The kind which leads her to lose that promotion that Joanne was talking about to Frieda – who she is happy for.

But then comes the day of the walkthrough. Lawrence was just supposed to pick up his box and kick rocks. Issa gave him the time she wouldn’t be there but he remained. Leading to them having one of the few mature conversations you’ll ever see on this show. One in which Lawrence explains how he got into his depression and apologizes for shutting down on her. In return, she apologizes for cheating on him and expecting him to do better for the both of them rather than focus on consistently bettering herself. To say the least, both definitely get closure.

Leading to Issa day dreaming that, after they both admit they still love one another, maybe them getting married, having a kid, and living out the trajectory they once were on. But, alas, that’s a dream. One which can’t be real so she heads to Daniel’s house to sleep on his couch. If only because Ahmal made way too many rules about living with him and she loves Molly too much to live with her. Just to summarize, Ninny (Regina Hall) is in love with Massa (Scott Foley) who is married Christine (Katharine Leonard). Someone who knows Ninny is messing with her husband. Much less she is smarter than a slave should be. Though, to add some drama into the mix, Christine was messing around with another woman, Lydia (Sarah Chaney), Isaac’s (David Sutcliffe) wife and Ninny is married to a man named Zeke (Michael Jai White). Someone cheating on her with Ninny’s sister Nessa (Nija Okoro), who also slept with Massa.

Then to add more drama to the mix, for reasons not gone into, I guess so he’d have a hard time spotting them, Ninny told Massa to chop off one of Zeke’s feet. All of which we see at the end of the episode, and leaves us wondering: Why didn’t they put these pieces at the end of each episodes instead of “The Wine Down?”

Between Kelli, Molly, and Issa talking about the difference between working with Black people and white people, especially dealing with their comfort with you vs. making them comfortable, and the boys’ conversation, I was in heaven. For again, these are the conversations you rarely ever hear. Especially on shows which predominately have Black casts. Much less, seeing three Black men as friends, not competing, just chilling and being brothers to one another, while surely nothing new, it touched me in a way. If only because their conversation dealt with something Lawrence was feeling insecure, maybe even vulnerable, about. And seeing a young Black man like Lawrence insecure and vulnerable, and it not being part of a joke, was meaningful to me.

Then, backtracking to that Molly, Kelli, and Issa conversations, I was living! For while Insecure may be considered a “Black” show, it is on a network which hasn’t really catered much to these kind of Black people. So for them to be having that kind of conversation on a network which wants to produce, despite the controversy, a show about if the confederacy won the civil war, tickles the hell out of me. 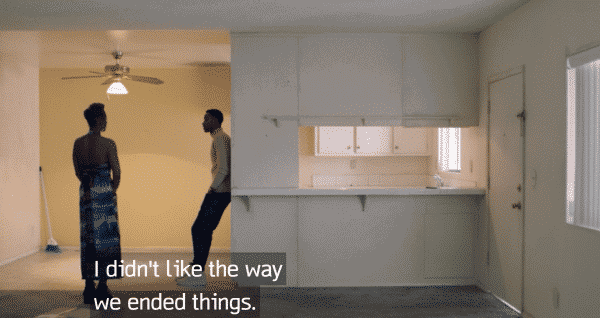 Arguably, Lawrence was the most immature character on the show. He was a grade a F*ck boy and while many, even myself in season 1, tried to make excuses for him, it became hard to continue that in season 2. However, after the Tasha situation, and with him being with Aparna, it seems that dead light bulb got replaced.

All of which really came to a head during that apology scene. In those moments, you realize he understood that for him to move on, maybe have a healthy relationship with Aparna or any woman, he has to apologize to Issa. Be it for what he did to her or inspired her to do. He has to own that and not just lash out at her. Then, with Issa apologizing, it really makes it seem she wants to move on to. She wants him to understand her frustration, how, with what has been going on, or lack thereof, in her life, she was using him as a crutch. 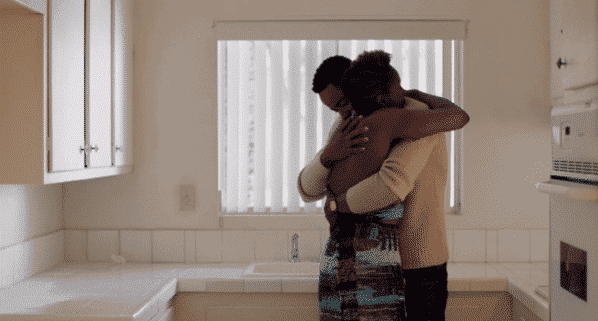 Sort of reminding you of the whole Black love thing with how “You’re my King and I’m your Queen” is ideal, but doesn’t always work. And, even when it does, it requires real effort to maintain. Thus correlating with the show’s overall theme of being the type of show which exhibits a different side of Black culture. One not living in some ideal world, one which is overtly ghetto, or where its lead is some professional who has an excessively messy life. I mean, yeah, Issa got issues, but her means of coping isn’t really hurting anyone but herself. She isn’t murdering anyone or sending them to jail. She is just creating a catalyst for her own and other people’s growth. Like how all interactions between two, or multiple people do.

Making it where when she ends up at Daniel’s doorstep, you realize that it might not be a step back for her. Through that conversation with Lawrence, what surely was a hard one, but has maybe led to them being capable of being friends again [note]As shown by him sending a Facebook friend request[/note], I think she got the same closure Lawrence needed. Thus allowing her to really give Daniel a chance and for them to maybe start fresh. For with her learning to communicate with Lawrence after all that happened, those lessons learned could allow Issa and Daniel to work things out.

Molly Back in Therapy 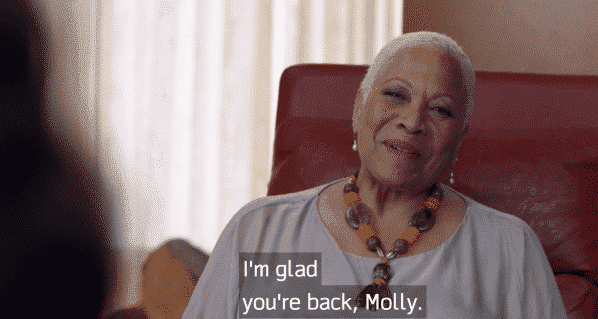 Everyone on this show needs therapy, but sadly only Molly has taken the steps toward finding someone and semi-consistently going. Though let’s be real, Issa can’t afford it and the stigma, much less being a Black man, maybe what keeps Lawrence from it. But, back to Molly, considering her going back to Dro, it helps us understand more of this ideal she keeps fighting to obtain. Of which seemingly colorism is part of the picture.

I mean, how else can you explain her seeing two dark skinned Black men, of different sizes, both who treat her right and would be good for her, but her being like “Nah, I’ll go for the light skin, tall, and married one.” How else can you explain it? Well, hopefully in therapy we’ll get to hear Molly dig into her issues. For I can’t imagine her opening up to Issa about this. If only she may fear getting checked over it.

While I can’t say how the Issa situation may go, I’m being optimistic, and whether Lawrence truly turned a corner, Molly, arguably, hasn’t learned a damn thing. Yet, for most of the season mind you, it seemed none of them did. So you have to wonder if this show may let these characters mature or may try to rely on them being F*ck boys and whatever the female equivalent is to help compensate for its lack of over the top drama?

But if the show didn’t have ho-tations, F*ck boy antics, and whatever Molly is doing, would we even talk about it? Yet, at the same time, I don’t know how long the legs can be for a show which focuses on those things. Granted, you can’t quickly compare Insecure to any show on TV right now, maybe some web series, but I don’t think that’ll make it where this show can go on past a 4th or 5th season. Assuming they stick to 8 episodes per season.

I can only hope, in the future, we get more Kelli and Tiffany. It is unlikely since neither are that close to Molly, Issa, or Lawrence, but can’t I wish? For Kelli, I need her to be more than comic relief. Then with Tiffany, that damn Reddit mentioned in the Lawrence topic, and should be seen below, has me seriously questioning what goes on in her life? To the point, I would have loved if the time spent for Due North, at the end of the episode, featured the conversations we never see Kelli and Tiffany have. Since apparently, they are best friends on the low. Um, I can sort of understand the obsession here. That is, the characters’ obsession. For there is really something weird, yet appealing about this Scandal-spoof. Which I only say since you know Momma Pope’s comments to Olivia probably inspired this program. Plus, the actor who plays Jake is in it. Thus adding a bit more fuel to the fire.

But, I gotta say, I wish HBO made a little web series out of it. Based on the accumulation of clips we were given, I’d say it could have been something worth doing to promote the show. Even if it would have led to similar ire to what Confederate may hold.

Get out of the should and live in the could.