Insatiable’s pilot really does show that we live in a time that lacks trust and takes to being offended easily, simply off a headline.

Patty, a teenager of a undisclosed age, lived in the shadows of her mom at her and society in general. Yet, she had two things to always cheer her up. One being her best friend Nonnie, who seemingly is queer, and Drew Barrymore. Someone who seemingly is her queen and role model. But, being a young girl sadly called “Fatty Patty” made it so binging, Drew Barrymore marathons, and even Nonnie, wasn’t enough. What Patty wanted was validation and the ability to truly say she liked herself.

Bob provided that. A flamboyant man, married with a son, who was one of the top lawyers around and also had beauty pageant coach aspirations. Yet, both of his passions were torn to shreds when Regina accused Bob of molesting her daughter Dixie. With that, any respect Bob’s father gained for him was loss and working in pageants? HA! But then Patty came into his life and he found a, to borrow from Anne with an E, kindred spirit. For he too was chubby as a youngster and hasn’t necessarily gotten past it. Yet, to both make a comeback, and support this young woman, he wants to invest in her.

Problem is, Patty, having no one really compliment and be affectionate towards her like Bob has, well, she is smitten. Add on Bob winning her case against this homeless guy who punched her, John, and she feels empowered. No longer does she feel like the fat girl who has to take what people and the culture throws at her. She can fight back and win. Thus, it leads to an insatiable desire to get revenge and keep this feeling only food once gave her before, going.

It Doesn’t Appear To Be Shaming 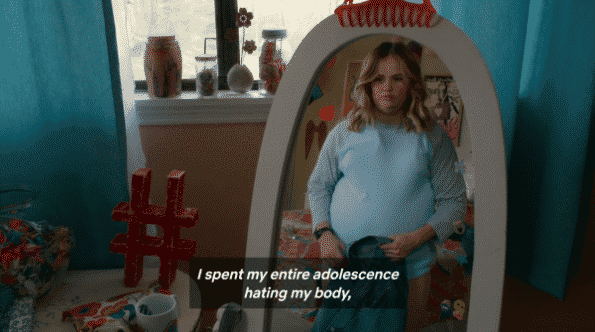 Considering the flack Netflix already gets for 13 Reasons Why, I really couldn’t imagine them standing by a show which dealt with body image issues without some kind of nuance. Much less, considering those attached, you’d have to wonder why they would work so hard on a production they know, in this day and age, could haunt them the rest of their careers. After all, the internet is vicious and websites are starving for content, likes, subscribers, comments and click bait.

Which makes the fact all the petitions and articles not being validated kind of hilarious. Now, don’t get me wrong, I get that we live in a culture where women aren’t really given the ability to be comfortable in their own bodies. Diversity may have presented more skin tones into media, but body shapes remain relatively thin if young, tone if older, and unless you are a comedian, heavyset women in Hollywood are rarely seen. So don’t take me praising the show as being unaware of what is going on.

It’s just, Insatiable is a dark comedy. Patty, even though she is skinny now, has lived her life as a big girl and the trauma people placed into her psyche has not gone away. When she starts feeling bad about herself, she still pinches at the areas where she used to have more meat on her. The first thing she does to calm herself, feel better, is decide to eat a candy bar. All of which isn’t presented as a joke but her trying to cope. Bob (Dallas Roberts): If someone had encouraged me to be myself

After all, whether it is men like John, or probably her mother, who liked thinking she was at least prettier than her kid, Patty’s life never made it where she could be this new age, confident big girl. Ange wasn’t taking her to Ashley Stewart or making sure she got to know between Ashley Graham or Marilyn Monroe, there are examples of women who aren’t stick thin being celebrated and the world seeing them as beautiful. This is not that kind of show.

Instead, as seen through Patty’s need for revenge, it is about a young woman who got a taste of what it was like to win, to feel invested in by someone, even have the sympathy of society. A universal feeling that nearly everyone wants. No matter if they are a big girl who wants love, someone queer who wants to know you don’t have to look like a rock star or swim team captain to find love, or be young. As noted in a recent Hollywood Reporter Roundtable, the universality of this story is that Patty represents the many who felt overlooked and when they got their first taste of being seen, it drove them nuts since that feeling was kept from them for so long.

So, About This Molestation Thing

While I enjoy Bob, Bob Armstrong more so than the other one, I must admit this whole false accusation thing has me a bit uncomfortable. For while we know Bob didn’t touch Dixie, the man usually speaks in innuendo and is set up in awkward positions with young girls very sexual. Making the fact a lot of his jokes are built around Bob being an alleged pedophile very weird.

Outside of the weirdness which will surely come from Bob putting himself in positions that will make him look like a pedophile, the pilot pushes the idea you should be able to enjoy this. While there might be a whole lot of controversy over the shallow idea this is just about a formerly fat girl getting revenge, after having her jaw wired shut and becoming skinny, it’s not really about that. As shown, more so it is about trying to capture and maintain that sense of validation which has long been held from you. The sense you can actually be the winner in an unjust world and yet, all those old demons and insecurities never going away. Since while you may have physically changed, mentally and emotionally you are still stuck in who you once was.

Hence the positive label. For while maybe I am digging too deep and spinning this? I may not be that invested in any of the actors’ careers, but I’d like to think I walked into this reading both sides of the argument, listening to the BUILD series interview, and gave this a fair shake. Which has led it to not becoming one of my favorite shows, by far, but it still being worth watching, recapping, and reviewing, the whole season.