The Package – Recap/ Review (with Spoilers)

When it comes to teen sex comedies, most are weird and sort of funny. The Package is hilarious and goes beyond weird to sometimes cringe-worthy – in a good way.

High school juniors Donnie, Sean, Becky, Sarah, and Jeremy, decide to go camping deep into the words. Which is an awkward situation from the get-go. First and foremost, it was originally supposed to be a guys trip with just Donnie, Sean, and Jeremy. However, with Becky being cheated on and her not going to be stuck with her twin brother’s friends alone – she invites Sarah. Who happens to have a contentious relationship with Sarah since their situationship turned sour.

But, despite relationships which are argumentative or, in the case of Sean and Becky, weird because of a former crush between them, things seem okay at first. Jeremy uses a fake ID to buy alcohol, they drink, dance, and then Jeremy cuts his penis off. Leading to them scrambling to get him help and with Sean giving the medic the cooler with their beers than the penis, so begins their long and hard journey. One which leads to the penis being bit, sucked, getting dirty and then professionally cleaned, and going having the kind of life few penises before Jeremy’s have ever had before. Sean (Daniel Doheny): I will suck the penis.

Like many, when it comes to Netflix comedies, especially focused on teens, I expect them to be okay but not necessarily something I’d pay for if they weren’t on Netflix. The Package is a very rare exception. For I probably laughed harder to this movie than I have the majority of comedy specials I’ve watched on the platform. I’ve especially laughed more at this than The Kissing Booth or Alex Strangelove.

Why? Well, call me immature, but it was the penis jokes. Whether it is the handling, or mishandling, of Jeremy’s penis, or the jokes surrounding what happens to it, I couldn’t help myself. For while most male-dominated comedies make sex jokes, ad nausea, there is something about the group in this movie, and the situation they are in, which makes what is old, and honestly tired, funny again.

What also helps is that there are layers to these relationships beyond, “We’ve known each other since Kindergarten! How could you – blah blah blah.” When it comes to Jeremy and Becky, twins, Jeremy is strangely invested in his sister getting some. Maybe because he knows her ex was a douche and would prefer his best friend to that guy? If you take it that way, while it is still twisted he wants his twin to have sex, and talks about feeling what she feels, it is kind of sweet.

Then when it comes to Sarah and Donnie, their relationship, or lack of defining their relationship, is also a highlight because you get it. They get along and seemingly have a passion for one another, but understanding what that means, defining it, is much more difficult. Especially with them in high school and knowing many high school relationships barely last a month. So with the sex being good enough, why complicate it? After all, they are juniors that year, seniors the next, so they could end up strangers within 2 years. 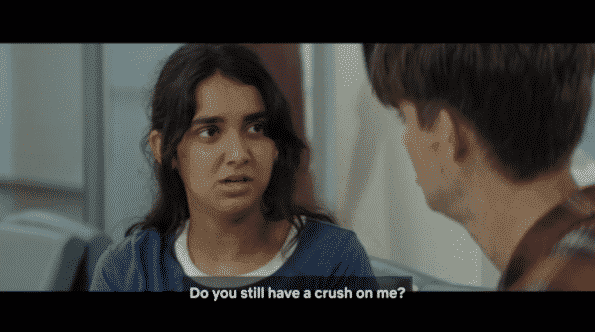 Becky (Geraldine Viswanathan): Do you still have a crush on me?

Leaving Becky and Sean. While they won’t make you swoon, how awkward and adorable they are will make you anticipate them eventually kissing. For Sean is a sweet guy, but not necessarily your boring nice one. Then with Becky, it’s the same thing but opposite gender. Neither one are squares but come off like everyday teens. The kind you’d hang out with if you were around their age and, with that familiarity, that boosts your investment.

It Feels Worthy Of A Sequel

Most Netflix movies that don’t scream “THERE WILL BE A SEQUEL!” seem like they would do just fine being one and done. With this film, and I don’t say this often, I’d like a sequel. Imagine this group during senior year, having prom, and the style of humor they have. I’m talking Jeremy and his girlfriend Kendall premiering their Britney Spears musical, maybe Sean and Becky singing something from RENT

to do a prom proposal, and as for Sarah and Donnie? Them coming up with something for them because I can’t right now. I think it could work and maintain the quality of this movie.

While I’m Not A Doctor, I Gotta Call Bulls***

Okay, so first and foremost, recognizing he was playing with a sharp blade, and maybe erect, but how exactly did he get startled and swooped up fast enough to cut off his penis – to the base? Also, how did Jeremy not bleed out? Much less, considering all that penis went through, how come it was still viable for reattachment?

Is there a doctor in the house to explain this?

At this point, I feel like I’m a Geraldine Viswanathan fan. For while she doesn’t make this movie, for it really is an ensemble effort, it is hard to not believe this is just the beginning. Whatever road Mindi Kahling paved, this girl is going to speed down that and surpass her in no time. And as a whole, again, this movie is hilarious in ways that, as long as you enjoy immature humor, makes you want more.

Hence the positive label. The Package delivers (I’m starting to realize there are puns in this) in ways you don’t necessarily expect it to. It’s funny, the relationships are weird to the point of coming off authentic, and it leaves you wanting more. With the belief that by getting more, it won’t ruin what made you fall in love with the original.

So definitely check out The Package, only available on Netflix.