In The Dark: Season 1, Episode 3 “The Big Break” – Recap, Review (with Spoilers) 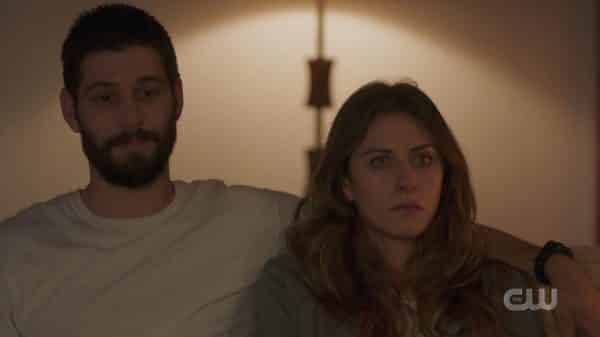 Murphy is facing one of the toughest challenges of her life – being someone’s girlfriend. As Darnell tries to keep Nia happy.

Max is starting to get under Murphy’s skin, and not just in terms of sex. She is catching feelings and with her not really dating her whole life, it makes this all very new and disastrously uncomfortable. Yet, Max is trying to work with her. Heck, even after he sprains his penis, due to Murphy pushing him out of bed, he doesn’t make a big deal of Jess giving a diagnosis or Vanessa, who seems feignedly interested, knowing. At least until she kicks him out for doting on him was becoming a bit too domestic.

But, as an alternative, there could be Dean right? With Chloe growing close to her, asking for her when she gets her period, Murphy and her dad could be awesome. Plus, Dean kind of likes Murphy so that works right? Well, unfortunately for Dean, Murphy reconciles with Max so he may wanna call that hooker back if he gets lonely.

It isn’t clear why Darnell is scared of Nia, but he does convince Max to skim $15,000 for him. Of which he planned to use to convince Rhonda to stop making a fuss about Tyson. However, with Murphy in her ear, and Max, Darnell is coming to realize this white girl is going to be a problem.

Case in point, she gets a hold of Tyson’s girlfriend, Keira, his soon to be ex who feels like she has been ghosted and cheated on. For with discovering someone named Jamie on Tyson’s phone, she is pretty sure he met another girl. As for whether that’s true? Well, with Murphy helping Dean with Chloe, yet again, he seemingly will push to learn more about Tyson to return her favors.

While Murphy becoming more amiable to the idea of a relationship isn’t a new storyline, and her being blind and adopted only adds but so much, it’s still entertaining to watch. Her struggles with being the good girlfriend while her boyfriend recovers from a penis injury is kind of funny but also helps you see a flip side to a familiar story. For usually the problem is the girl, woman rather, can’t get a date and so that’s why they are so awkward. With Murphy, her problem is that she is the type you have to chase and be consistent with to the point of questioning your sanity. Something that many don’t since their ego gets hurt the morning after they have sex.

However, her slowing things down, by nature more than choice, says a lot. Not just in what Jess said but also in maybe refuting what Murphy may think she deserves. Take note of that conversation she had in the girls’ bathroom – the idea that when you can’t see how people look you judge based on personality. Who is to say she doesn’t judge herself by her own personality and with being told she is actually beautiful that didn’t make her want to be a better person?

Which is a bit twisted, in terms of that being one of the reasons she decides not to generally be an ass to people. Yet, it also shows how much what is seen on the outside affects a person inside. Also, it makes you wonder what Joy and Hank might have said to Murphy, or not said, growing up, if Murphy truly was trying to match her personality to her perceived looks.

Generally, Murphy and Felix are only shown trading sarcastic comments and Felix being like the annoying sibling Murphy never asked for. Yet, in them talking about Felix’s traumatic high school experience, their relationship expanded a bit. We got to see that Murphy may care about Felix’s feelings and while he can be a bit much, she might recognize that he essential to the company not going bankrupt since her parents know what they are doing, but not necessarily to the point of growing the business.

Could There Be More To Tyson Than Meets the Eye?

While Keira’s main issue with Tyson right now is feeling ghosted, which thankfully didn’t lead to Murphy saying, “Yeah, he probably is ghosting you since I think he is dead,” you do have to wonder if he isn’t as good of a person as he appeared. I mean, likely dealing drugs aside, there is the question of why he’d often disappear from home and whether he was just dealing or part of gang activity? Much less, how did he treat people outside of Murphy? Someone who, maybe, he was just using to escape his past and the fate he saw himself on?

You know, taking note she saw him as a hero, live that life instead of a societal villain? A statistic he became since he needed money and working minimum wage wouldn’t cut it. But in Murphy’s eyes, he was this good dude, worthy of a woman who liked to appear to have it mostly together, and not this kid whose life is sketchy.

With Chloe’s mom gone, it’s nice that Murphy is willingly stepping in. Mind you, she isn’t the best replacement, but I’d like to think alongside softening Murphy’s image for us, it might help her understand her mom’s troubles more. For Chloe might be the closest Murphy may come to having children, at least for viewers, so in being there for Chloe’s first period and more, it could lead to a breakthrough?

I Was Expecting Nia To Be Beefed Up This Episode

Nia we barely got to see the face of and while Darnell presents her as menacing, and Max knows who she is, there remains the question of when will we learn who she is? Especially if she is going to be treated like some kind of boogieman we’re supposed to fear. If not the puppet master who holds the strings to the lives of multiple characters?