Table of Contents show
1 Trigger Warning: Sexual Assault Scene At About 26 Minutes In
2 The Introduction
2.1 Question(s) Left Unanswered
3 Highlights
3.1 It Doesn’t Inspire Quick Comparisons – Storywise
4 On The Fence
4.1 How Her Powers Manifest & How Noticeable It Gets In One Episode
4.2 These Aren’t Really The Type Of Characters Who Hook You As Much As The Sci-Fi Bits
5 First Impression: Mixed (Stick Around)
6 Follow Wherever I Look on Twitter, Like us on Facebook and Subscribe to the YouTube Channel.
6.1 Check Out Other TV Recaps
6.1.1 Such As These Similar Shows
6.2 Watch: Here [External]

Trigger Warning: Sexual Assault Scene At About 26 Minutes In

Henrietta, who just goes by Henry, is in her late teens and for years has been dealing with seizures. Something which has gotten so bad that she can’t even drive anymore. Which is just another sucky part of life, on top of her mom providing her the opportunity to move every 6 months. Usually because of her breaking up with a boyfriend but Henry sometimes is the cause as well.

But, here they are, stuck in some part of New York, the state, not the city, where Mr. Hope and daughter Jenna so graciously host Henry and her mom Cleo. Though, while Mr. Hope makes the best of it, Jenna, who isn’t sharing a room with Henry mind you, is a tad bit bothered by all this. Yet, unlike Patty, a queen bee type, she isn’t necessarily antagonistic towards Henry.

Though, no one is really since Henry mostly keeps to herself. That is, until Clay tries to push himself into her life, gets rejected repeatedly, but then becomes a necessary evil after Henry gets caught tagging the area and has to pay a fine. For, you see, Clay’s dad owns the local auto shop, or should I say auto mall, and Mr. Hope sells Henry’s car to him to pay the fine. 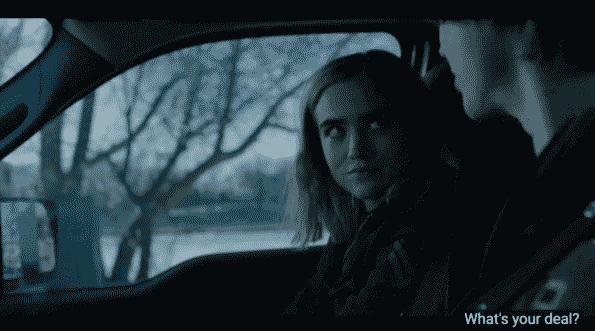 Thus leading to Henry asking for a favor in getting her car back and Clay cashing that in thinking he is about to get some. Leading to a seizure which crumples Clay’s car and breaks one of his vertebrae. Oh, while Henry teleports home.

And to make things interesting, it is made clear Henry isn’t the only one who can teleport. It is just, whoever else we see do it, they have it down a bit more and seemingly are using the power to kill people somewhere in an arctic environment.

Taking note this is a spin-off of the movie, long forgotten, Jumper

, when it comes to television, it is hard to think of something which compares to this. For one, there aren’t a lot of teen superheroes on TV, especially female ones. Never mind of the live action variety.

But what perhaps might really be the draw is that Henry doesn’t have control over her powers yet. So this is very much an origin story.

How Her Powers Manifest & How Noticeable It Gets In One Episode

With it being only the first episode, naturally, like most superhero, or supernatural, productions, the lead has no control over their powers and they manifest when under stress. Making the fact they begin when a teacher is being rough, when Henry is nearly raped, and when Clay’s brother traps her in the trunk a worrisome trend. For while she gets away, there is the issue way too many people are catching onto her having the ability to teleport quickly.

Which wouldn’t be such a bad thing if these were the type of characters who hooked you in rather quickly. Now, don’t get me wrong, Henry is likable but Hasson doesn’t give that “Carry a show” kind of vibe. Her acting in this doesn’t really seem that evolved from Twisted, and the way she plays an angsty teen  Especially because her angsty teen style is such a trope that it makes it where you get the vibe this is a normal girl with powers.

Something I like for it makes the show feel grounded, yet also makes the show kind of “meh” since normal quickly steers towards generic rather quickly. And outside of Hasson, I can’t say there is this magical co-star who compensates. There is this weird kid name Townes who is vaguely interesting, but not to the point where you really would want to binge this show to see what he does next. And outside of him, the only person who may draw your attention is Officer Hulce, but that’s only because she is on the road to busting Clay’s dad, Bill, and maybe discovering the huge cover-up going on in the town.

Plus, she is one of the few people who speak who isn’t white.

Admittedly, there is a part of me that wants to like this show, watch a whole season, and give it a chance, yet at the same time, there isn’t any real reason to have hope here. That is, besides this girl having super powers and this random Italian guy who likes to leave people dead in the artic. Neither of which I feel, if I was trying to convince a stranger to watch this, would work so how could that muster up the desire needed to binge 9 or so hours more of this?

But, despite not giving this a glowing advisory, I’m still labeling this as mixed. If for the sole reason that there is this nagging feeling that this show could maybe get better. By no means does it lay out why in the pilot, but this does seem like the type of show which could gain a cult following and while its ratings never got that high, people go nuts for it at cons.

Such As These Similar Shows

If interested in shows featuring young women with super powers, Believe, a one season program, brings you a mix of the show Touch and super powered human on the run. However, the young women is a girl, 13 or less, and her powers are telekinetic, among other things. And while the ending is frustrating, since this is a one season NBC show, that ended too soon, up until the last few episodes, you’ll really get into this one.