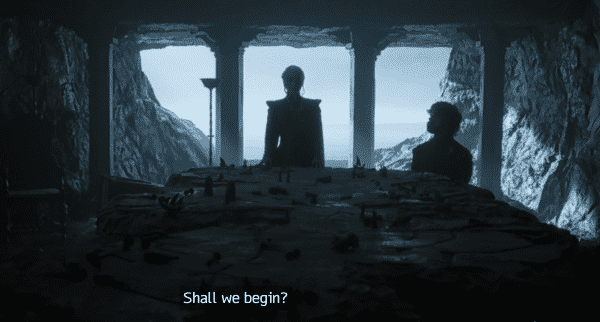 Game of Thrones remains perhaps the only show which can be more than 3 seasons in and still entertain its audience.

As Sam discovers where to get a load of Dragon glass, Jon Snow is trying to deal with his new position. Well, more so how to handle a sister who is no longer meek and quiet but has a voice. One she wants to be heard even in public forum.

Which of course bothers him. For while Jon is trying to be progressive in now having girls train to perhaps be as strong as Brienne, some old rules remain the same. But, rather than worry about Sansa, perhaps his eyes should remain on Lord Baelish. For while Sansa and him remain cool, she knows he wants something. As for whether she is willing to give it, and what could happen if she doesn’t, only time will tell.[note]It should be noted Clegene and the Brotherhood without Banners see a vision of the white walkers. One in which it seems they are prepping to circumvent the wall perhaps? [/note]

I pledge my allegiance to the queen of the North Lyanna Mormont! For honestly, I think between her and Sansa, after the war is all over, they maybe the ones Daenerys or Cersei will truly have to worry about. Especially Lyanna. I mean, one of the things Sansa mentions is there is no reward for loyalty and her house was one of the few which came to Jon’s side. So, surely, between marrying Bran [note] who just crossed the threshold of the wall [/note] or giving land to her house, she deserves a stronger foothold of the north.

Love for Lyanna aside, I do wonder how in the world is Sansa going to willingly become the new Cersei? She is no longer this meek little girl who can be a political marriage pawn. She, like Lyanna, like Daenerys, like Brienne even, isn’t some traditional princess or lady. You can see this growing desire to rule and not be an advisor but the one seating at the head chair. Something which, I can imagine, Lord Baelish giving her. But, then again, who is to say she may not marry Baelish and kill him so that her family owns both Riverrun and Winterfell? Like the way, perhaps, it should be.

Arya has officially killed off the Frey family and now has her sights Cersei. Yet, she remains thousands of miles away so she isn’t an immediate threat. However, Cersei has no reasons for peace for, outside of Arya’s pending return, to the north, the Starks threaten her claim. To the West, there is Highgarden and Olenna, to the South are Oberyn’s family members who surely want revenge and to the east, there is Daenerys looking to reclaim her family’s throne.

So Cersei is in a bit of pickle. Especially since she has the false claim of being the queen of the seven kingdoms but can only truly claim three of them. So, when Euron Greyjoy wants to meet, she entertains him. After all, the Iron Fleet is very valuable. Granted, the man who controls them was a runaway [note]His words exile[/note], attacked the Lannister castle back in the day, and was outsmarted by his niece and nephew. But that was in the past and a lady can’t be picky right?

Well, we’re talking about Cersei here [note]A woman for 40 years took note of her father’s cunning and has outdone her master. [/note]. Even with Jamie she barely shows face so who is Euron? So while he would love to marry a queen and have more power, he is denied his proposal. Though, he isn’t put down by her. All it does is lead to a determination to win her favor. A task which should be interesting to watch. 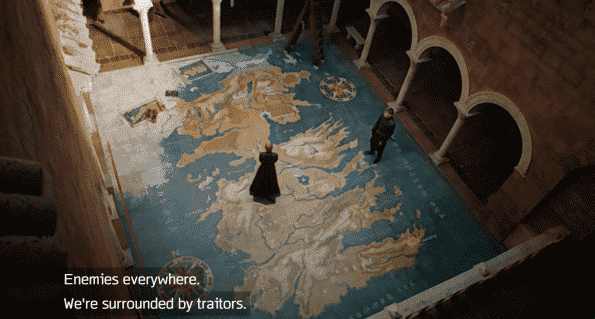 Thinking long term, I think the White Walkers have to be dealt with before Cersei. If only because, between the two, Cersei is a better sell and a better villain. Yet, with all the moving parts of Westeros, who knows what may happen. It could very well be that Highgarden and Ellaria’s children make their move and are left to bite the dust. Meanwhile, Daenerys and Jon handle things in the north and dispel the White Walkers. Thus leaving three great families to battle for the throne.

As of now, that seems like the best way to handle things. But that’s just me.

Shall We Begin?: Daenerys 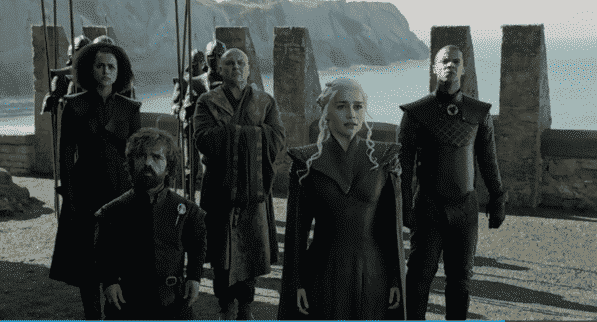 Daenerys lands at Dragonstone and takes it all in. This is where the king once sat, walked, and planned his wars. But now she is here. She is here and after taking a moment she asks: Shall we begin?

A lot of Game of Thrones is prep. For at least the first 5 or 6 episodes we are dealing with politics, strategy, and watching people wheel and deal to find what is the best outcome for their person. So with that, I’m mentally prepping to come down from this high for I know it isn’t going to last. It will pick up towards the end, but now that the show has us by the throat it is just going to tease us before jabbing in the knife.

Leading to the question: Who will be the one to cause us heartbreak this season? Someone always has to die, that is what this series is famous for. But, question is, which fan favorite bites the dust and joins the White Walkers this season?

Leave one wolf alive and the sheep are never safe.

So there is no punishment for treason and no reward for loyalty?

Without us, men would be little better than dogs. Don’t remember any meal but the last, can’t see forward to any but the next. And every time you leave the house and shut the door, they howl like you’re gone forever.