The person behind AltIvyW is revealed, and Brooke gets added to the list of people who need their own episode.

Table of Contents show
1 The New Independent: Silvio, Brooke, Lionel
1.1 Commentary
2 I Was Getting Some, Getting Some… Teeth!: Wesley, Lionel
2.1 Commentary
3 The Man Behind AltIvyW: Silvio, Lionel, Reggie
3.1 Commentary
4 Other Noteworthy Facts & Moments
5 Question(s) Left Unanswered
6 Miscellaneous Commentary
6.1 Brotherhood
7 Highlights
8 Follow Wherever I Look on Twitter or Like us on Facebook.
8.1 Previous Episode’s Recap
8.2 Check Out Other TV Recaps

With writing being what Lionel loves, and wanting a Pulitzer one day, he decides to work with Silvio in order to create a New Independent news production. Something Silvio is for so he brings Brooke in, which pisses off Lionel since they have a thing. However, with Silvio shooting down Lionel’s ideas about figuring out more about the school’s secret society and also who AltIvyW is, it is a bit of a setback. Since, as of now, that is what Lionel is obsessed about.

Making Brooke’s interest kind of weird since they always had a tiff. One which, Brooke explains, comes from her being so used to being the only one like her so Lionel inspires a crabs in the barrel vibe. But, trying to change, evolve, maybe make a friend, she tries to be nice to Lionel. Which leads to him using a clue he thought he found to ditch her, but she planted the clue so she catches up quickly. Leading to the discovery Al took Sorbet, Kelsey’s dog, but that’s about it.

Well, that and Brooke trying to see if her and Lionel’s chemistry could be sexual but that’s a whole other thing.

“I’ve just always been the only one.”

I need Brooke to have her own episode. Kind of like Kelsey, she has this comic relief vibe but also there is something deeper there. For between her antics at the pride party and her coming off a bit more real this episode, there is really something there to explore. She has this Coco-esque vibe of wanting to be the best and perfect but is less ice queen and more Black Nerd. Plus, she is one of the few, outside of Kelsey, girls who got some real meat on their bones with a speaking role. Not to forget – she nasty.

Which is probably the main thing you can really ding this show for. As much as it has Black diversity, in terms of physical look, it is just different hues and backgrounds – to a point. But this is only season two and the show only has 10 episodes a season. There is room for growth and correction. If not additions.

While Lionel is running around with Brooke, Wesley gets neglected a bit. Which sucks for him and Lionel since they are having long text conversations, but haven’t really gotten to hang out or anything further. But, after a bit of a fail on Reggie’s part, they have some alone time, one thing leads to another, and Lionel is giving some head. Thing is, Lionel is very new so there is some teeth abrasion which makes things not that pleasurable. However, considering the awkwardness of not being able to get their shirt off, falling off the bed, and surely more to come, it seems both will give the other leeway as they get comfortable. It was nice to see Lionel get his first, romantic, gay kiss, and mess around a little. Especially because, when it comes to queer Black men, usually it isn’t in such an ideal way. Lionel doesn’t have to worry about his community or family, as of now, when it comes to being gay. The person he is messing around with isn’t on the down low, unsure of themselves, or playing with his emotions. They are just two nerdy guys who like each other and enjoy making out with one another. May even be falling in love. Here is hoping we see more Lionels in media because the tired ole struggle of Black LGBT people is getting old. Surely bullying and traumatic parents isn’t the sole way things have to go.

By the end of the episode, there may come the question of whether we may ever learn who AltIvyW is? After all, it is a bit of a central conflict figure of the season. Yet, after Reggie’s failed attempt at hacking the account, which surprisingly wasn’t done earlier, all is revealed! It is SILVIO!

Someone who maybe shouldn’t have been such a surprise considering who his friends are. As we saw during the pride episode, Silvio’s friends are only pseudo-liberal. They’re still highly problematic and aren’t really for dealing with those who want to challenge them on that. When it comes to Silvio, that sort of bugs him yet, as much as people talk about safe spaces, it is also recognized that in the forming of self-spaces there are bubbles. Ones which launch attacks when you aren’t in agreement with those in the bubble.

So, despite being gay and not white, Silvio proclaims himself to not be of left of center thinking and practical storms off. While being perfectly fine if Lionel outs him. 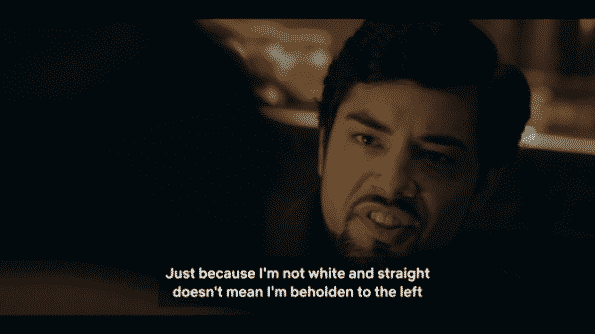 This can be very interesting depending on how it is handled. Latinx, Hispanic, and Caribbean folk can have a bit of a mix between liberal and conservative politics. Be it in terms of abortion, views on homosexuality, immigration, and other topics. For, as with Black people, they aren’t a monolith. However, what we rarely see, and even in the case of Grown-ish didn’t get a whole lot of, are those who have a more conservative viewpoint being fully developed and being given a platform. One which doesn’t make them look silly, or saying or doing something to get a response.

So, with Silvio coming out, for a lack of a better term, as AltIvyW, here is hoping that when Rikki and Carson appear, Silvio maybe front and center. For while surely the show can’t give every last barely featured sub-sect of the Black, Latino, Gay, and etc experience a voice, sometimes just a moment is better than silence. If not just being part of the YouTube vacuum. 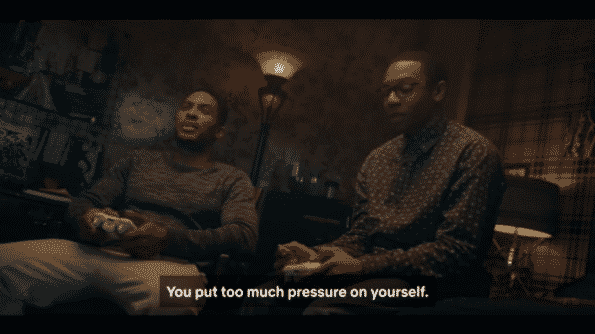 “You put too much pressure on yourself.”

I truly love Troy and Lionel’s relationship. Troy, like a big brother, has this rather cute chemistry with Lionel which, I know, sort of stems from a former crush, but the way Lionel looks to Troy for guidance and friendship is adorable. And I would do the usual, “Also, how often do you see two Black guys as friends” but that is becoming fairly normal to see so it doesn’t apply here.