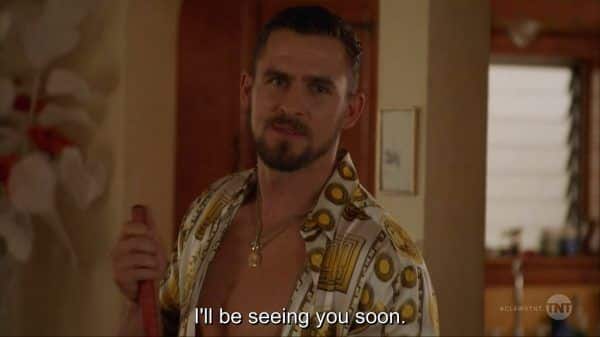 As PTSD starts to effect Desna heavily, and Uncle Daddy gives Bryce a reason to have it too, we finally learn the truth about Polly.

Being that Uncle Daddy is vehement about getting revenge for Roller, he goes into the archives. He finds someone who works for the company Titus that had beef with Roller over an invoice and figures, this must be the one who killed his boy. Virginia says no but Uncle Daddy kills him anyway. If just out of pure frustration. For he is steeped deep in this guilt, a sense of regret and while Chip is helping him find answers, they aren’t the correct ones. 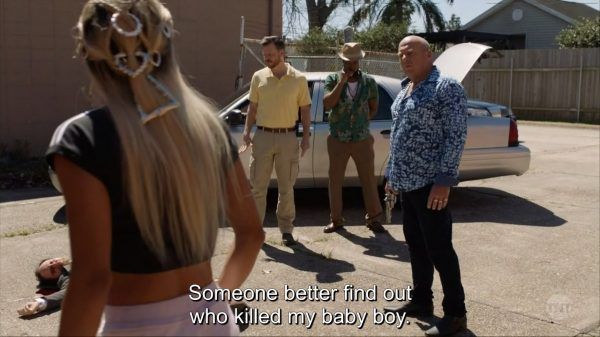 Which is going to become a problem not just for Virginia but Bryce. For with Uncle Daddy pushing him to become his new Roller, that means him helping to dispose of the bodies. Something Bryce isn’t mentally prepped for. In fact, while the man is getting chopped up, Bryce basically snaps. He vomits, loses his mind as he throws the man’s body parts in a swamp to become gator food, and then returns home. There, for his babies Brienne (Aadyn Encalarde) and Baylor (Charlotte Gautre or Elise Gautre), he makes breakfast in a blood stained shirt. Scares his babies so bad they call Jen.

But it gets worse! While Desna is helping to clear everyone’s debts, Bryce notices that Dr. Ken has a gun in his safe. Combining the fact said gun is the same kind which killed Roller, and Dr. Ken insulting Roller, alongside noting Roller used the same password for everything, Bryce figures Dr. Ken killed his brother. Leading to Desna having to try to save him. Something we’ll see if she is successful at in the next episode. 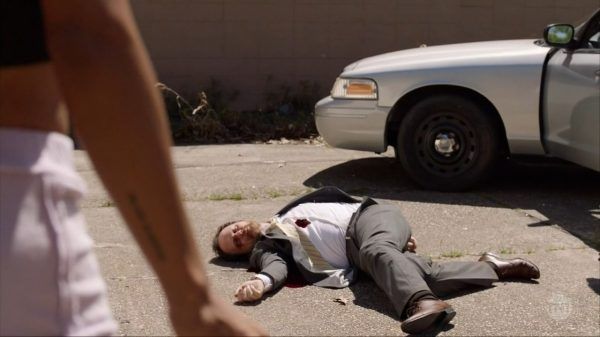 I don’t understand Bryce’s way of thinking. Granted, his brother died, he is a former addict, and he is on the verge of snapping. That is taken into consideration. However, a woman walking in with $20,000 she can just drop down doesn’t set off red flags? Desna, being Roller’s girlfriend, doesn’t seem like a suspect at all? I get that she has long been a part of their organization and has kept things going smoothly, but wasn’t she just making a scene about money with Uncle Daddy? One which Roller was supposed to smooth over?

Surely, even if Bryce can’t put 1 and 1 together, Uncle Daddy should be picking up on this. Not that he is the brightest bulb in the light fixture but just the different stories circulating should be a red flag for him. One which should, at the very least, have him honing on Virginia. Much less questioning why is Desna, someone who barely knows this girl, is bending over backwards to look out for her. For I’m sure Uncle Daddy knew about Roller’s indiscretions. So is there no part of him that wonders why Roller’s side piece and his main squeeze are getting along like sisters? 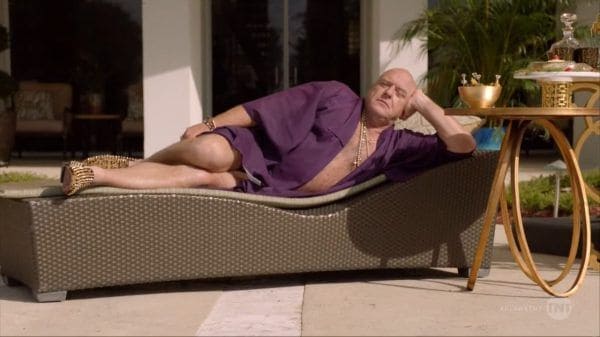 Being that Desna got her money when Roller got shot, she has enough to get her salon up and running. Problem is, that $80,000+ debt has her whole plans messed up and while Uncle Daddy is fine with $500 a week from everyone involved, Desna is not trying to spend the next year under his thumb. So, she decides to push the legal boundaries of how much Dr. Ken can sell. Alongside that, she starts marketing for both new customers and stealing from the competition – Peter Pain.

Combine that with blackmailing the woman who Polly was trying to impress, and they get their money. Problem is, Uncle Daddy isn’t around to receive it because he is waiting on Bryce to get and kill Dr. Ken. 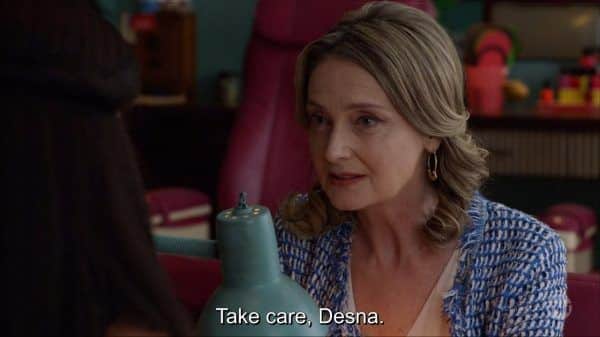 I think Desna set up herself, Dr. Ken [note]assuming he lives through this[/note], and Bryce up for failure. A quick turnaround like that is going to make Uncle Daddy think they can do that on a regular basis. Which they barely were able to do this time. So with that in mind, you know between the feds and the people who run Peter Pain, they are going to be around soon.

Hell, considering how the Russian mother pops around to get her nails done, she maybe sizing up the woman who is causing her so much trouble. Either to try and recruit her or see if she is a true threat. Which, based off their interaction, I think the woman feels quite safe in the idea of making a move.

We’re All Trying To Leave Something Behind: Dean, Desna, Polly 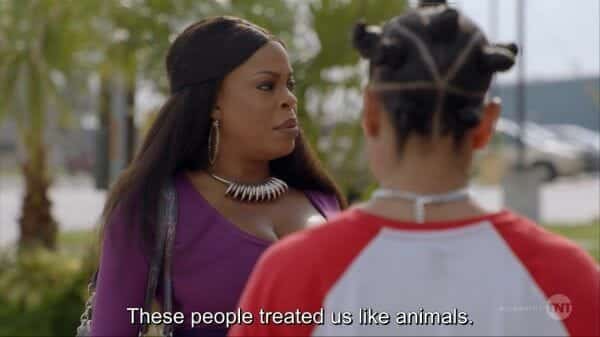 There is a lot of background information dropped this episode. For Polly especially, but also for Dean and Desna. One thing we learn is that both were in the foster system for a long time and were abused. I’m talking, forced to eat out of a dog bowl abused. The kind where Dean just seeing a picture of the Coombses sets him off. Making any thought and idea of working out to be like Arnold Schwarzenegger go out the window for he is too distressed.

Luckily though, Desna, perhaps through Polly’s mom who used to work with the learning disabled, knows how to calm Dean down. Though, arguably, Virginia is also a factor. For he has seemingly become attached to her. He has even learned some Vietnamese to speak to her. 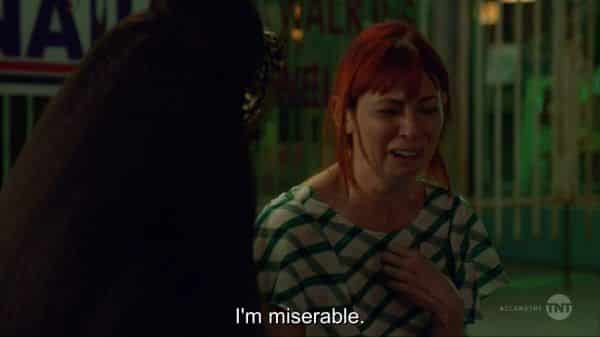 But, Dean and Desna aside, the real focus here is Polly. A woman named Sally (Gina Torres), a bougie type, for some reason walks into Desna’s shop and spots Polly. Someone she knew as Heather. With that, Polly puts on an accent and takes on one of her old personas. Tries to milk all that Sally can give her. Be it going to country clubs, massages, and damn near getting to live in a guest house.

Problem is, that damn bracelet snitches on her. Forcing her to tell the truth. Which is that Polly is a 45-year-old woman from Saluda, North Carolina. One who didn’t come from some affluent background but from a dad who worked in a factory which handled car interiors and a mom who taught learning disabled children. That is her background and her life is someone who was a con artist who got caught and now does nails for a living. Someone who lives in the ghetto but wants to live in a mansion.

Which, with the gap between dreams and reality such a chasm, it is heartbreaking.

You know, I realize I don’t talk about Dean enough or really give him credit. If only because, while more than a gimmick, at the same time he has been a character trapped in Desna’s house for the most part. So outside of his interactions with her, and now Virginia, which hasn’t been huge in any way, I would just skip over him to shorten my word count.

However, that sort of changes with this episode. With learning about the abuse, it takes on a whole new meaning Dean wanting to protect Desna now that Roller is gone. Much less, it adds a layer to his relationship with Virginia. For with Desna, who knows how much that boy saw his sister go through but because of one thing or another, he was unable to stop it. But now, being that he is bigger and more capable, he wants to make up for the times he wasn’t able to.

Then with Virginia, perhaps he sees in her what Desna might have been at one time. Before she became slightly hardened for that was the only way to survive. Hence why he learns her language I think. He wants her to feel welcomed and loved in a way neither he nor his sister got. And while he may not have much to give, time, attention, and effort is how he plans to show Virginia she is cared for.

Easing out way into talking about Polly, there has been a question in my mind about how Desna met all these girls? With Jen, it seems clear she knew her before the salon. However, when it comes to Polly and Ann, so comes the question if the closeness comes from her hiring them for the shop or knowing them before that? With Polly mentioning what her mother did, it leads me to wonder if she helped give Desna the skills to take care of Dean. For just her knowing a way to calm him down when he was having a moment, there is something about that which seems like something you would be taught. Not something you just pick up dealing with a person for 30+ years. 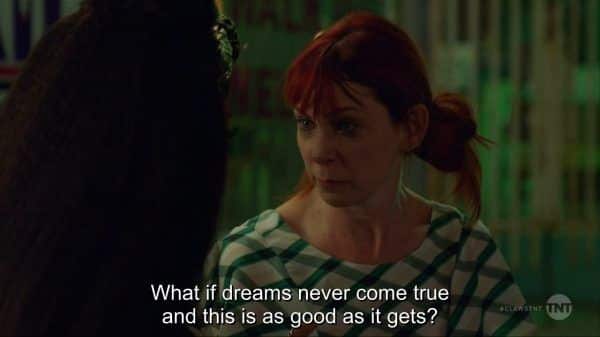 Then, focusing on Polly, you have to wonder how long, and how far, has she gone with conning people? For when it comes to Sally, it seems she had her life down pact back in the day. I’m talking accents, knowing who to associate herself with, as well as presenting the look. All in an effort to be someone she wishes she was.

But with her trying to bring these dreams into reality, comes the question of what inspired them? Has she, outside of conning people out of money or for their friendship, every pursued a means to really, legitimately, obtain this life she desires? For while I can understand her small town, middle-class upbringing maybe not being enough, there is always the question of what have you really done to change things?

Though, considering where she is, nail salon, ankle bracelet and all, I think we got our answer.