Message From The King – Summary/ Review (with Spoilers) Message From The King is a procedural revenge story where our lead finds one guy, to learn the name of another, and this process repeats until he is ready to exact his bloody revenge.

Jacob King (Chadwick Boseman) travels all the way from South Africa to Los Angeles due to a frantic phone call from his sister Bianca (Sibongile Mlambo). One in which she sounds scared and frightened. However, once he lands, no one she associated with knows where she is. They can tell Jacob a lot about how she has changed since she, Jacob, and their brother Isaac were the Three Kings, but her whereabouts are unknown.

So, being that Jacob has given himself but a week to find answers, he sets up a base out of a run down motel. From there, he starts hunting down friends, who give names of dealers, who give names of gangsters, and Jacob works the network. Then, with the remaining time he has left, he dishes out justice. With his main weapon being a bike chain and a few things he learned from his rough upbringing in Cape Flats, South Africa.

People get really messed up when it comes to the fight scenes. Jacob, after getting beaten by some cops under Candidate Leary (Chris Mulkey) is shown in a bed for at least more than a day healing. The way Jacob beats up this gangster Zico (Lucan Melkonian) requires him to wear a mask so his jaw can heal properly, and while none of the gangsters seem that threatening, when you see this:

It makes you think maybe we should take them more seriously than they inspire you to.

Though just a small time ally of Jacob in the film, barely worth mentioning in the story’s overall summary, I’d argue she gave the best performance in the film. For there is something about Palmer, who is like a less numb Kristen Stewart in my mind, which just has this difficult to describe vulnerability. The kind where, similar to Lupita Nyongo in a way in 12 Years a Slave, she almost steals the film from right under Boswick’s nose.

Which I say because, while he maybe hunting the people who hurt his sister, you find yourself more and more curious about this young mother. This woman you are rather unsure how she ended up in Los Angeles, much less with an 8-year-old [note]Who is her biological child I should add. As well as her being played by Ava Kolker who most will know from Girl Meets World. [/note]. For there is just something so tragic about her story that even with seeing and hearing what happened to Bianca, much less what may have been done to Armand, they come off as story fodder. All the while Kelly and Boot (Ava Kolker) are presented as real people worth investing in.

Boseman’s Is Kind of Dead On Screen

In many ways, one could argue Boseman has the potential to be the next Will Smith. Problem is, like we saw with Smith in After Earth, if you take away his ability to charm you, you cripple him. For while he does seem like a kind of bad ass, you grow tired of him quickly. For the only thing that makes him different from the dozens of other lead characters seeking revenge over a loved one is that Boseman is Black. That and he has an accent which sounds like his Black Panther accent toned down just a little bit. 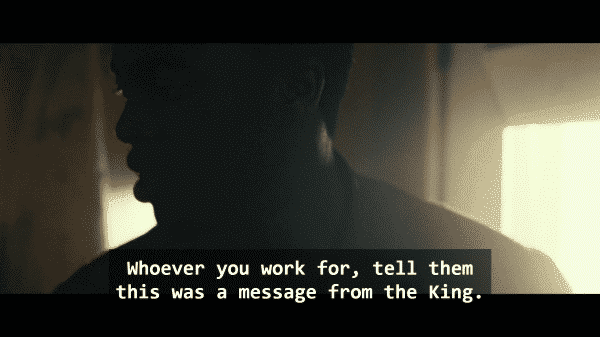 The writing of this film seems very procedural. As if writers Oliver Butcher and Stephen Cornwell were working off a checklist. Mysterious protagonist looking for someone – check. Said someone having gotten themselves into a lot of trouble they could have avoided – check. That person associating with corrupt and seedy people our protagonist often has to scare, rough up, and ends up killing – check.

Because of how predictable the story gets, and how Boseman fails to give this film more than violence, that is why Palmer suddenly become the best thing about the film. Much less these rather short action scenes become considered a highlight. For if you really sit and pay attention solely to the story, you are given something which can’t use the excuse “It would have been better if watched in theaters!” If only because the only difference would be you being trapped and unable to give yourself a break to try to get excited about watching this again. Originally I was going to watch and review this Friday but it bored me into going to bed early. So, I spent a good portion of my Saturday struggling to finish this. Of which I was living off the peaks which were the fight scenes and Palmer giving some sort of emotion to this dreary and cardboard film.

Leading to why this is being labeled to be skipped: It just isn’t worth your time. There is one sole compelling character and everyone else could easily be replaced by the million and one villains and protagonist who have been in plots similar to this. The one thing that this movie does differently is having a Black protagonist trying to get revenge on behalf of a Black victim. And like many a movie which seems to just race swap overdone stories, but input very little of the character’s culture into things [note]Outside of learning how dangerous their hometown is, South Africa is just a faraway place to show Jacob’s resolve for answers. That, alongside Bianca’s resolve to get as far away from their hometown as possible.[/note], it flops. Not to the point of souring your opinion of Boseman, but definitely making you wonder, without him being cast as a famous figure, what would his career be like?