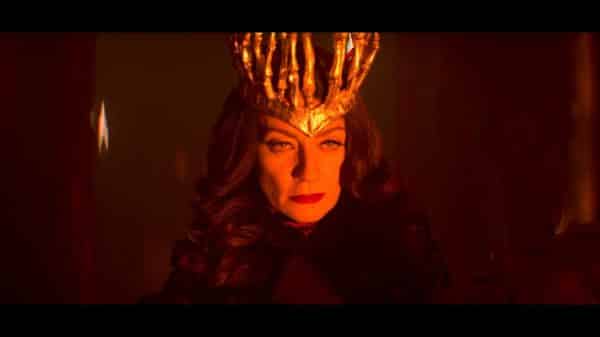 The true story of Lilith is revealed as someone makes the ultimate sacrifice in an attempt to stop Lucifer.

What The Humans Did: Roz, Theo, Harvey

Everyone had a task. Strangely, the mortals were tasked to keep the gates from hell from opening with just accessible shotguns and dynamite. However, what saves the day is Roz’s cunning seeing symbols to keep the doors closed. Then, with her sharing her visions with Harvey, who draws them, they keep the door closed. But not without Theo being brave enough to place the final symbol to active what I guess we could call a spell.

Lucifer meets with Father Blackwood and with being told Sabrina will ascend past him, he decides to poison his flock, take his children, and run for the hills. However, one child – Prudence, stays and tries to save, with the help of the Spellman family, as many as possible. At most, they save a dozen.

But, while Father Blackwood runs like a dog who was just halfway neutered without anesthesia, everyone else stays and fight. The first idea was to play into Lucifer’s ego so that Sabrina could pin him, Ambrose distract, and the aunts stab him where his wings were. However, Lucifer reveals only the Spear of Longinus can kill him and what Lilith gave them is but a nuisance.

So the next idea is to have Nick figure out the way the Acheron Configuration could be used. Which, unlike the past times he helped Sabrina, wouldn’t be out of love but redemption. For between the reveal of Nick being Lucifer’s pawn and Lucifer pushing the idea Sabrina is his child, she needed an ally she could trust wholly as her mind was becoming overwhelmed. Never mind the issue of being mortal so it isn’t like she could use the box and her aunties, as well as Ambrose, would be of no help since the complexities of the puzzle are beyond them.

Yet, alas, that plan fails as well.

However, not completely. The idea behind trapping Lucifer remains in play, but rather a box they use what Edward based the complexities of the box on: The Human Body. Thus leading to Nick ending up the vessel of Lucifer, after Lilith and Nick forced him inside. Then, to subdue Lucifer’s rage, now contained and limited by Nick’s body, Ambrose put a sleeping spell on him.

Leading to Lilith taking Nick to hell, where she shall rule, returning Ms. Wardwell to Sabrina, as well as her powers. Making it seem, once more, Greendale could be at peace. At least for now. Leaving the question: What’s next? Well, with the reveal that Lucifer is worse than anyone imagined, and after Father Blackwood wiped out most of the coven, so comes the question of what to do with the survivors? The answer in Zelda’s mind is to start the Church of Lilith and act as High Priestess. Oh, and speaking of Father Blackwood, after his grand betrayal it is decided between Ambrose and Prudence, who are closer than ever, they will hunt him and retrieve Prudence’s siblings.

Bringing us to Sabrina, Theo, Roz, and Harvey. After so much excitement you’d think they all would want normalcy. Maybe Sabrina would push for mortal and witch integration again? Nope. Instead, she decides she wants to go to hell, with her friends, and get Nick back. As if that makes one lick of sense considering what just happened.

You can never say Zelda doesn’t finish what she started. She said she would become powerful in the coven, but it ended up being one she made. Leading you to wonder, with it being one of the few, or first, ones ran by a woman, will she follow Edward’s teachings, the beliefs she was raised on, a mix, or something completely new? Also, as asked above, where will she house everyone? The Academy doesn’t belong to her new church and with the witch’s council likely to come for the Spellman family, going there seems like a challenge. So where will all those children stay? It isn’t like her home, despite the man doors we haven’t seen behind, could possibly fit all those kids.

Sabrina Just Loves Trouble, And Her Friends Are Fools

I get Sabrina is 16, Nick made the ultimate sacrifice, and she loves him, but her going to hell to get him is ridiculous. That and her friends seeming excited about any plan of hers. All things considered, they got lucky, and the fact demons didn’t possess them or claw the hell out of Theo was a surprise. So to go through hell, which could be interesting, for Nick? The person whose body holds Lucifer? While I get the show must go on, it also makes me continue to believe mandrake Sabrina’s loneliness and desire for love were in tune with real Sabrina. Unless she just really wants Nick to be her first.

While Prudence and Ambrose are clearly breakout characters, and Gabrielle, Prudence’s actress, makes her presence known in whatever scene she is in, so comes the question if they could hold their own? Assuming the hunt for and of Blackwood is taken serious, they’d have to be away for at least half a season. So what would that look like? They have chemistry, were lovers, but how much time would be dedicated to them traveling, gathering information, and dealing with Blackwood and his new crop of followers?

Also, there is the unfortunate need to ask if these two were so good because we got them in such limited doses? Only time can tell.