With the witch hunters defeated, so comes the question of how to handle Sabrina, Nick, and especially Ambrose? Nevermind whatever spell Zelda seems to be under.

Sabrina’s sudden powers are a bit scary since they go against the science, for lack of a better term, when it comes to witchcraft. Usually, there is a sacrifice, a spell, something being used to perform magic and yet Sabrina doesn’t require that. She just has to will it into being, and so it happens. As you can imagine, this scares Father Blackwood for as he is now the Anti-Pope, on an interim basis, this is a HUGE threat. So, taking heed of Prudence’s advice, he planned to setup Sabrina so that she would be branded a heretic and killed alongside Ambrose. The only person who could bring him down. Also, he tasked Sabrina with producing Ambrose’s familiar to prove the accusations of his guilt.

But, while things are in motion in the witches world, including Sabrina and Nick no longer being expelled, Sabrina shows her miracles to the humans as well. How? Well, by giving Roz her sight back. Now, it isn’t noted if by giving her sight back it means Roz lost her cunning, but that is the farthest thing from Roz’s mind.

Something is up with Zelda. First and foremost she is wearing bright clothes, spinning around like a ballerina, and damn near seems like someone is pretending to be her. The truth is though, warlocks apparently have a trick to subdue their wives with a Caligari spell. This makes them Stepford Wives who don’t speak unless spoken to, do as told, and are rather simple.

Unfortunately, this spell isn’t broken until after Leviathan is killed by Zelda. This happens after Nick found Leviathan’s corpse, Dorian snitches, just because, and Zelda sends Leviathan through a meat grinder. But, with Zelda back and aware of Father Blackwood’s plans, she is ready to help and put aside whatever respect she has for his position. 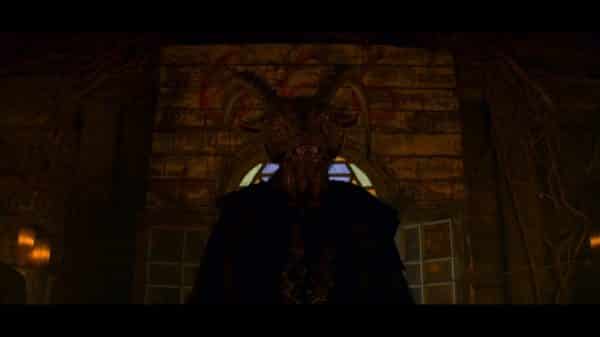 Leading to a rather eventful series of moments. The first one being, during Ambrose’s execution, Hilda makes it so the executioner loses his head instead of Ambrose. Then, when a student, then Father Blackwood, followed by Sabrina are tasked with killing Ambrose by the guillotine, the Dark Lord shows. Well, actually Sabrina projecting the Dark Lord and making it so Ambrose is forgiven and Father Blackwood called out as a pretender. Thus killing two angels with one spell.

But, don’t count out Blackwood yet. Just because he loses his titles and Ambrose lives, it doesn’t mean he doesn’t have a backup plan. Though, based on Harvey and Theo discovering an altar in the mines, one which has Sabrina’s image from when her eyes were white, it may not matter what he has planned. For between what the altar prophesizes and Sabrina trying to integrate mortals and witches, it seems he might be too late to stop what’s coming. Taking note Netflix has pretty much limited most of its shows to 10 episode seasons, naturally, that coerces writers to get to the point and rush things. However, the takedown of Father Blackwood, even counting her battles in season 1, just feel too swift. Also, has she ever really lost against him? Her expulsion was reversed the following episode and whether she is at trial or what have you, any battle she lost she came back and whooped a grown man’s ass.

Mind you, a grown man who isn’t twice her age. If we go by how old Ambrose is, which is somewhere near 90 or 100, assumingly Father Blackwood has to be 150, 200, or more. So for him to be beaten by a 16-year-old is pathetic. Especially since she often knows nothing about nothing and is playing catch up each and every time.

Jerry said he was part of an order, right? What order you know is comprised of just 3 members? Also, you just killed angels. Do you really think, right after killing angels, a party, in which they look like any other mortal, is a good idea? It just begs “Kill me! I’m an idiot!”

Considering All Harvey Knows About Witches, Demons And More, Why Did He Go Into That Tunnel?

Harvey lost his brother in the mines until Sabrina revived him. As a child, Harvey saw a demon in the mines. Just in the last episode, and this one, he met a swath of witches, a ghost child, and now a woman’s voice whispering to him makes him want to get adventurous? What?!

A Question Of Faith Roz questioning her faith has been established for quite some time. However, Prudence doing so is quite new. Yet, with her wanting to feel empowered but also wanting to appease her dad, she is at a bit of a crossroad. One which may push her closer to Sabrina, even if she doesn’t necessarily want to be, and may lead her to be one of the first to transition into this idea of mingling. Making me hope, between her and Agatha, one of them may end up with Theo.

I mean, this is assuming Theo is into girls. It hasn’t been made clear what he is into or if he is ready to date, to be frank.