Will Sabrina have her first time? May Hilda get some? Will Theo revealing his truth self to his dad go over well? So many questions – like who is stalking Nick in the shadows?

This Is Me: Theo, Mr. Putnam 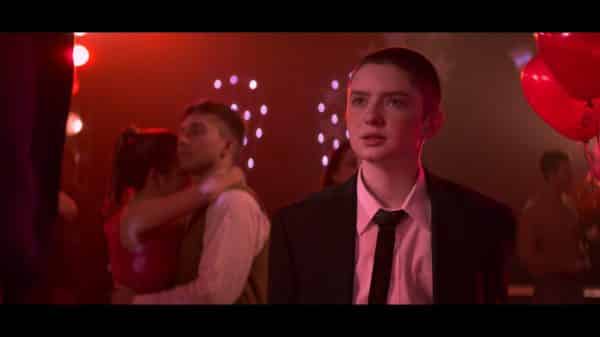 Theo, after confirming himself to his friends, has now done so with his dad. A moment which, as you can imagine, is a little shocking since Mr. Putnam probably figured his kid was just a tomboy. Yet, rather than fight or flip out, he accepts what he was told and goes with it.

We learn Dr. Cee is possessed by an incubus and has been avoiding Hilda since, as part incubi, that means he is quite dangerous when hot and bothered. However, between Hilda being a witch, and Zelda having had a tryst with Incubi, she’ll be able to handle it. As for Roz? Well, after talking things over with Sabrina, getting the OK, she and Harvey go to the dance together but aren’t officially together just yet. Yeah, they kiss, eventually fool around a little, but things remain complicated.

Partly due to Roz revealing she isn’t a normal mortal, which had to be said since Sabrina has set quite a precedent. However, Harvey admires the honesty, and so he’s cool with her being a “cunning” as Nana Ruth put it. But, with it clear Harvey wanting to have sex with Roz, so comes the question if she is ready for that? Mind you, she isn’t a virgin, but she isn’t liberal like the full-blooded witches we know. Plus, to throw a wrench into things, she goes blind either momentarily, or permanently.

The Lupercalia tradition is the flip side of Valentine’s day. So, rather than be about romance and love, it is about lust and open expression of urges. Well, to a point. It is still a holiday which is about one on one interaction, but it does end in what could be considered an orgy. Leading you to wonder why Sabrina would partake, and the answer is Nick. He has been rather consistent in seeming like a good guy as well as being quite charming. Thanks to this, Sabrina and Roz have a chat about sex and knowing when you are ready.  Thus revealing some details about Roz’s first time and breaking down what made her feel comfortable. Roz: Okay, but hanging out is one thing, having sex, that’s next level, ‘Brina.

However, two things complicate Sabrina and Nick having sex. The first is Dorcas, who may or may not have snatched Nick and possibly raped him, unless he consented, before the third and final night of Lupercalia. Also, there is Nick’s familar, Amalia, who is a wolf, a jealous wolf, and is killed before Nick and Sabrina were supposed to have sex. Thus killing the mood since Sabrina ends up killing her and between all the blood and Nick weeping over the last being who was like family to him, it kills the mood but does bring him and Sabrina closer.

Death Of A Child

One of the things not really gone into much when it comes to the trans representation is what it is like to be a parent who is losing a child and gaining a new one. Think about it: Mr. Putnam no longer has Susie, the girl either he or Theo’s mom named. He now has a Theo, and any dreams he had for Susie are now dead, and he is on his own to both deal with the transition and mourn. After all, what does this man have beyond his dreams for his kid and his farm? Dreams which likely dealt with Susie meeting a nice boy, having a family, and her being happier than he is at this point in life?

And I recognize the idea might seem selfish and it’s better to have Theo be alive and comfortable than Susie suppressed and suicidal, but it’s hard not to feel bad for Mr. Putnam.

Hilda May Get Some

Ain’t much to say beyond me being happy for her since everyone is getting opportunities but her, and Salem, at this point. I’m someone who believes most shows aimed at a young adult audience probably get consumed more by a tween and teen audience than anyone likes to admit. So it makes the conversation about knowing when you’re ready rather important. Particularly since the way sex is handled on this show is in a positive way mostly. It is treated as something for pleasure, shaming is seen as terrible, and with Roz revealing she isn’t a virgin, it also pushes the idea it isn’t just the liberal witches having sex all the time but also the mortals who aren’t too different from Sabrina.

Thus giving us a wealth of views and also, from Roz, an idea of how you should feel before your first or next time. Heck, in a small way, you can even say, for Harvey, this is him being ready too. Since his breakup with Sabrina likely was hard and being with Roz means someone new to fall for and with how sensitive he has shown himself, I’m sure there is some fear there.

The show’s title may feature Sabrina’s name but let’s be clear, Zelda is just barely #2 when it comes to Chilling Adventures of Sabrina. For if the story isn’t focused on Sabrina, we are either seeing Zelda’s latest quest or Lilith dealing with masquerading as a principal. Pushing you to realize how this show isn’t just empowering in terms of young women, but also making sure those of a certain age aren’t treated as old and forgotten. They are just as vivacious if not more.

Nick Is Sauvé Or Manipulative Nick: Could I possibly be that someone special.

Nick is pretty much the epitome of Lucifer in my opinion – hence him getting to play the figure in Father Blackwood’s play. Which leads you to wonder, especially taking note of the Dark Lord liking him and Sabrina together, if he is a tool? That may be his person is only meant to help weaken Sabrina’s resolve and lead her down the dark path. I mean, the Dark Lord can see love is the easiest way to weaken the girl. She nearly burnt down a school to protect her loved ones. So what better way than a charming warlock to wiggle into her heart and make her the witch he needs her to be?