With learning Sean identifies as “Honey Brown,” this leads to those in Janelle’s household and Trish debating what Blackness is while Ashley works on how to tell Sean about his dad.

The Talk No Parent Wants To Have – Ashley, Miles

Ashley knows it is time, and her prepping for it is so momentous her boss even lets her go home early to prep. But rather than head to Janelle’s and pick up Sean immediately, she rolls a spliff, heads out into nature, and talks to her version of Miles. This leads to a lot of back and forth that ultimately boils down to her feeling guilty about him being in jail because of her and having to deal with, after building up jail to be a bad place for bad people, her having to deconstruct that for her kid.

While Nancy is watching Sean, she learns the boy doesn’t identify as Black but “Honey Brown,” and with that, she goes into a tailspin. Mind you, two generations back, Nancy has a white relative, but with her firmly identifying as Black, it seems Sean is expected to as well. Thus leading to a lot of conversations about what it means to be Black, which includes Earl, Janelle, and Trish, who pops in for unexplained reasons. Trish explaining that with Sean being from Oakland, he’s Black

But, ultimately, Ashley takes a side-eye to these comments and the idea Sean never saw a Black film or has a point of reference. Which, with Earl pointing out how much he identifies with one of Sean’s favorite movies, Paddington 2, we learn that might be Ashley’s way of easing her sons into Black films – alongside making The Wiz the only Wizard of Oz he knows.

After picking up Sean, Ashley talks to him about Miles being in jail. She bypasses the why but lets him know it’ll be 5 years, they will go see him, and Sean isn’t happy. However, using one of the books Rainey bought, Ashley tries to walk him through what’s happening.

And as this happens, it seems Janelle might be catching feelings for Earl! Mind you, it may seem like it started with a touch of the hand and him remembering something she said, but it could be more than that. Take note, their conversations, banter, and back and forth have all been rather cute. But rather than being a new brother, it seems Earl may have the potential to become her lover.

Being Black is not a monolith, and every time a show approaches the conversation of Blackness, it is a blessing. But what makes Blindspotting different is that it brings in someone like Trish, and their take, which can often feel absent as we have the Earl and Janelle types go back and forth. Now, what are the Earl and Janelle types? Well, you can take note Earl comes from a good family, a father who is with his mom, owns a business, and Mercedes, and pair that with Earl just getting out of jail. Alongside that, you have Janelle, who has traveled the world and is a smart cookie, but also her employment situation is shaky.

But, more often than not, the conversation is dominated by those who seem like Earl and Janelle’s best traits than those who have the opinion of Trish, who associate Blackness with circumstances that come from living in an urban area. Now, does the show get real deep into things? Absolutely not. However, one of the things that have been lost in the push for diversity has been showing diversity within a culture. So Blindspotting showing different takes on Black culture from Nancy’s point of view, to Janelle and Earl, and then Trish, it’s a welcome reminder to times when Black shows weren’t rare, and conversations about what it means to be Black in different parts of America.

Ashley Finally Talking To Sean About His Dad 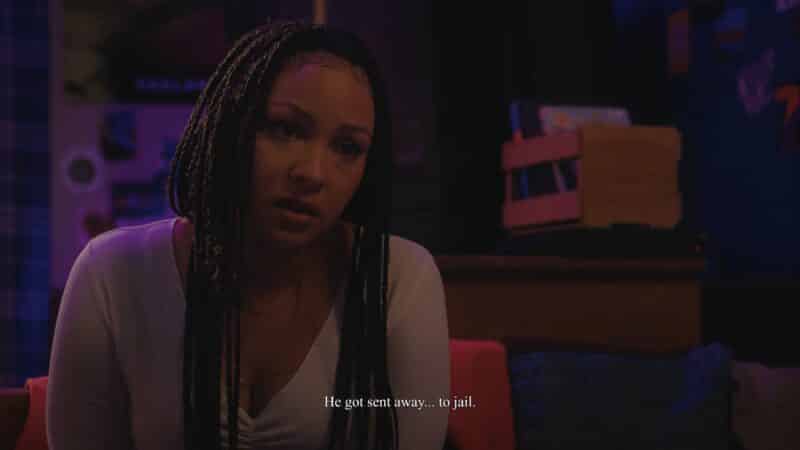 Ashley explaing to Sean his dad is in jail

This almost seemed like it would be saved for the season finale, but thank the lord, it wasn’t. So now, with this cat out of the bag, so comes the hope that Ashley’s storyline can begin to move on from this secret and guilt she holds. Because that has been one of the biggest definers of the character, and no amount of poetic monologues or out there dancing could stretch out how tired the wait has become.

Earl and Janelle Becoming A Thing

Earl and Janelle are just cute. Granted, both need to get their lives together, but sometimes being in the struggle with someone helps you get your life to where it needs to be. For as much as people should be accountable for themselves, not wanting to make your partner look foolish can be that extra boost you need. So whether this is the start or just signs to come, here is hoping this doesn’t end up bad for either party. Blindspotting: Season 1/ Episode 6 – Recap/ Review (with Spoilers)
Trajectory: Plateau
With quality conversations, the potential for a new romance, and Ashley FINALLY telling Sean about his dad, things are moving steadily over in Oakland, CA.
Highlights
The Blackness Conversation
Ashley Finally Talking To Sean About His Dad
Earl and Janelle Becoming A Thing
Disputable
84