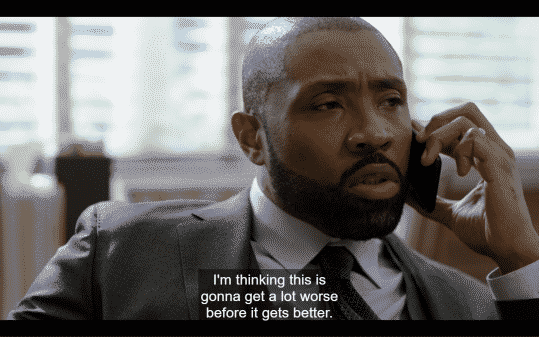 Lady Eve makes it clear Black Lightning has to be eliminated, for real this time. However, how can you take down a superhero beloved by the people? Well, turn the people against him.

A New Drug On The Street: Jefferson

Jefferson has been shown to be a Joe Clark, from Lean on Me

, kind of principal. He has no problem going the extra mile, believes in repetition to build character and a sense of pride, and is very protective of his students. Which makes learning about Bernard being addicted to this new drug called “Green Light” troubling. According to Gambi, the drug is like if crack cocaine and PCP had a baby together. But, what makes matters worse is that it gives this almost Anissa type of power to its users. Or at least did with Bernard.

Leading to him promptly being expelled and Bernard’s father, Mr. Lewis, begging Jefferson to let his kid back in. After all, thanks to the way he runs Garfield, Bernard is on his way to college. In fact, he has 4 acceptance letters already. So, after battling back and forth with the board, Jefferson secures Bernard’s stay. But, in the process, gives over some of the power he has over the school.

Which of course means he is very upset and you know with Black Lightning, like his DC cousin Batman, while he won’t kill most people, he will beat you within an inch of your life. So, he hunts through the supply chain and comes across a high school track friend named Two-Bits. Someone he tries to get to stop, before Black Lightning has to be brought into the situation, but Two-Bits needs the money to support his family. What else can he do?

So, he gets the same treatment the rest do. A full on butt whooping until Black Lightning is reminded how complicated crime is. Not everything is Black and white, like with Lala. Knocking out Two-Bits, and having him go to jail, means his family being without him for 30 years. So, proving Black Lightning can show mercy, he tells Two-Bits to get out of the game and he will be spared. Though, he still has to get a knockout punch.

Everyone knows Harriet Tubman as someone who guided slaves to the promise land. What is forgotten though is she also carried a weapon on her at all times. And with Anissa inspired by Black Lightning and tired of how inept she finds the police department, which she says to Inspector Henderson’s face, it seems more and more she may debut as another Freeland superhero.

However, there is still a need to learn how to control her powers. When she decides to get retribution for two teen dealers trying to sell to her students, and calling her a B****, she attacks them and sends them to the hospital. Which was in no way her what she wanted to do.

Then, later on, after hanging with Grace at the bar, some gang types, or just disgruntled men, non-100 related, come about and cause issues. Which don’t call for violence, at first, but when they knock Grace out, so goes up Anissa’s hood and she takes each of those men out. Followed by, assumingly to dispel the rest of her aggression, stomping the ground to the point it sounds like an explosion.

Which, as Anissa mulls over the idea of using her powers to fight crime, Gambi looks into the explosion, and her leftover footprint, with curious eyes.

There are layers to the gang and drug activity. Tobias is but a fallen politician who heads the 100, Lady Eve is but one of a conglomerate of gangsters, and who knows if that is where the line ends? But what is known is that Black Lightning has got to go. A task Tobias has to handle for the main reason he is even in the position he is in is because, 9 years ago, it was assumed he did what Lady Eve and her associates couldn’t.

The question is though, how can Tobias do that? Well, to start strategizing he calls his little sister Tori from Miami. Her idea, a quite genius one may I add, is to turn the people against Black Lightning and to have the first person to call him out being Khalil. With him getting shot, because Black Lightning can only save but so many, and unfortunately does leave collateral damage, Tobias is to poison the well. Remind people that Black Lightning is part of the problem and while Jennifer, I’m sure, might be very thankful for Black Lightning saving her, he didn’t prevent what happened to Khalil. He didn’t stop a bullet from severing his spine and making it so not only are his Olympic dreams gone, him walking isn’t an option and let’s be real, the chance of Jennifer staying by his side is slipping.

Which, considering the two were about to lose their virginities to one another, you know he has to be low-key pissed about that.

With Two-Bits we are introduced to the idea that crime isn’t exactly people’s first choice in life. It may be where they end up, but while Freeland isn’t touted as a dead end place with high unemployment or anything like that, take a look at Two-Bits. His argument for staying in the game is feeding his kids and his family. Now, assume he doesn’t have a college degree and that track didn’t really get him anywhere. That essentially leaves just minimum wage, or barely above minimum wage, work.

Something that isn’t enough to raise kids, have a family and do more than simply survive. Once the rent is handled, and you get the absolute bare minimum for food, that’s it. So the drug game becomes tempting when you see people hang out all day, sell a couple of bags, and then walk about with a couple hundred or thousands of dollars. And while, yes, it is dangerous, so is being broke and living paycheck to paycheck. Which is an idea strongly presented and appreciated.

Black villains and females villains, much less a combination of the two, don’t exist in huge quantities.  So for us to have Lady Eve and Tori on the same show elevates the show to a whole other level. For it doesn’t just have a Black superhero, Black love, a Black queer person without the usual issues we see, and a functioning Black family, even if it has a divorce in it. On top of that, we don’t have just characters like Kara and Lynn, respectable and well to do Black women. We also have Lady Eve who is a gangster and businesswoman. Sugar, southern sweet, but also will probably cut you up like you’re a mortician.

Then, in terms of Tori, let’s remember that Tobias called her. That this man, who always has a formidable team, asked her to come all the way from Miami because she has the skills required to take out a man like Black Lightning. Women on this show are given their props in such a way beyond simply playing wives, mothers, or being part of a support system. The women on here truly get the ability to show all sides to their person and arguably being a woman is more so an adjective that can be used to describe them than a core and defining characteristic.

Putting Two and Two Together

Black Lightning only wears, what I guess can be considered a Kato mask, on top of that, he has clear connections with Jefferson. Be it Black Lightning coming out of retirement for his daughters, protecting the march where his family, again, is front and center, and then with Mr. Lewis calling Jefferson and Black Lightning showing up, uh, no one can make connections here? Yes, he changes his voice, but even with Two-Bits, are you telling me he can’t, up close, recognize that is clearly Jefferson under that mask? It isn’t like we see a whole lot of people with the same haircut, facial hair, and size of Jefferson walking around