Wherever I Look
Recaps, Reviews, and So Much More
Home TV Series Atypical: Season 2/ Episode 7 “The Smudging” – Recap/ Review (with Spoilers)
TV Series

As Sam makes progress towards college, he grows closer to Bailey. Also, Casey deals with the fallout of telling Izzie what happened.

We All Have To Do Better: Julia, Elsa, Officer Timms, Doug

As made clear, don’t tell Doug nothing unless you are ready for him to react. Don’t tell him about you drinking, don’t talk negatively about Sam, just don’t bring him no bad news – plain and simple. However, when it comes to Sam being arrested, Elsa decides to let Doug work his magic and connections. Which only ends up getting him blown off by Officer Timms.

So, taking note of how he reacted, Doug talks to Elsa about making a class for first responders and the like. An idea inspired by a conversation with Julia, who calls since Sam has been leaving her updates for weeks on what he has been going through. 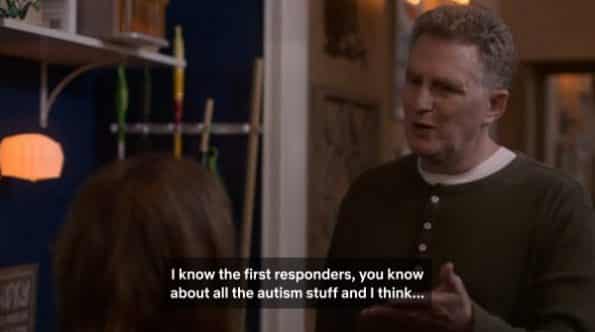 Doug: I know the first responders, you know about all the autism stuff and I think…

It really does seem that Doug is learning to move on from the past. Granted, the affair hasn’t been brought up and he hasn’t seen the bartender, which I feel might happen, but it seems he is doing better. Well, at least in terms of Elsa’s place in his life. For going from roommates who will end what they have when the kids graduate to now wanting to start classes with Elsa, that is a big jump. Though it does lead me to wonder what happened to Elsa’s hair cutting gig that Luisa helped to set up? We just going to forget about that?

Sam has to pick a college and with Paige getting into Bowdoin, she says Sam should apply too. Thing is, Ms. Whitaker seemed to let many a school’s deadline go by. So now she has to rush Sam and with Sam slightly comfortable with letting people make the big decisions in his life, originally he was just going to apply to Bowdoin. However, Casey gives him a wake-up call that he basically is handing the reigns to his life from their mom to Paige and he needs to really take control of his life.

Leading to, after his own kind of panic attack, Bailey, once more, smoking in the art supply closet and catching Sam. This time it is him drawing and she is quite taken by it. She even asks him to draw on her arm for a potential tattoo and seems to like what he does – and him as well. To the point of kissing him but with it having to be a secret.

What is no longer a secret, however, is Sam’s art talent so Ms. Whitaker is now tasked with finding an art school.

Paige: In a totally platonic way, of course.

I wonder if Paige will flip out when she finds out about Bailey. Since I can fully see Sam asking her about what to do since she is the only other person he kissed and dated. Will she flip out? Get mad Sam keeps disregarding her feelings? It’s hard not to feel bad for this girl.

Though, we may end up feeling bad for Sam too because Bailey wanting to keep that kiss a secret is a bit of a red flag. Is she embarrassed by the crush since it is Sam? With us addressing prejudice, are we going to follow that up with shame from being associated with or liking a person with autism? Granted, this show never hits Sam too hard, but keeps things real about people like him. But I don’t know if I’m ready to see Sam deal with something like that.

Being that Casey once again has dumped her childhood best friend, whose name I struggle to remember, for someone else, it makes Izzie becoming distant hard. Especially since it is because of Nate and, to make things worse, Izzie takes Nate’s side. Even to the point of bullying Casey.

Luckily, after someone writes “Slut” and “Ho” on top of Casey’s sneakers, Elsa buys new ones so she doesn’t have to run with those words on them. For, lest we forget, Casey hasn’t had new running shoes in a long time. Plus, while Casey lives in a nice house by most people’s standards, it is a one income house so her family can’t afford new stuff all willy nilly. Making that purchase a big deal. 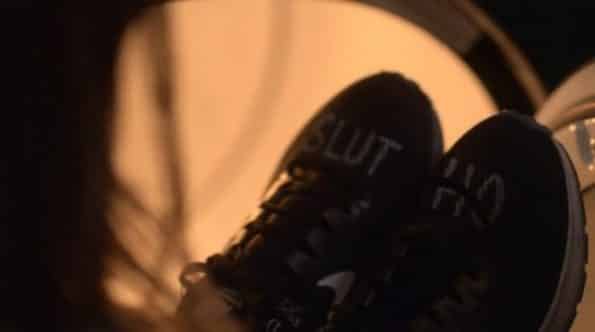 I accidentally ruined what is coming up with Casey so I’ll try not to think of that. But, I gotta admit, the idea Casey might be queer makes sense but it kind of irks me. If only because I find myself weirdly invested, as seen with Insatiable, and the first season of Andi Mack in the idea of media not painting stereotypical depictions of queer people. That is, for guys, it not always being the flamboyant one who is gay or bi or in the case of Casey, the tomboy. Not to invalidate those like that but it’s one of those things like, for Black people, you wanting those Cosby Show

and Star. Call it respectability politics or just wanting more diversity, but as much as I like Izzie now, I also dig Casey with Evan.

Which could just make it so Casey is bi, which would be cool, but I don’t want her to break up with Evan. Especially since their relationship recovers this episode.