Sam get’s his first taste of heartbreak as Casey maybe getting her first taste of what love is. Meanwhile, as Doug makes headway with Sam, he might be losing Elsa.

People think I don’t know when I’m being picked on, but I do. I just don’t always know why, which, in some ways, is worse.

While imprinting usually deals with, usually, a baby bird thinking someone who isn’t their mother is, in this case, it is something romantic. With Sam desiring a relationship and Doug trying to explain what it means to be with someone, the only logical choice for Sam is to date Julia. After all, she is understanding, seems to love Sam’s quirks, and he enjoys being around her.

Problem is, she is 26, is in a relationship, much less living with the guy. However, Sam doesn’t tell Doug this until Sam is breaking into Julia’s house to leave a gift. So, for most of the episode, as Doug gets the chance to be the kind of dad he always wanted, he doesn’t realize he is helping his son woo his therapist vs. someone from school. 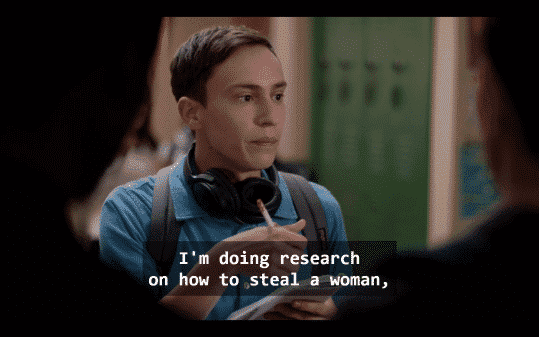 This is this slight discomfort sometimes when it comes to being a voyeur of Sam’s life. If only because it sort of exposes you to your own misunderstandings about people who aren’t neurotypical. Much less, how messed up your sense of humor maybe. Take for example when Sam was doing his research on how to steal a girl and approached Bailey (Ariela Barer) and her friends. Him calling her a skank and asking how boys wooed her was funny. However, there is also this need to realize he doesn’t seem to know what he said was inappropriate.

Yet, because autistic people are similar to Trans people in a way, in terms of if you don’t know one personally they can seem foreign, it’s like walking a mine field. You aren’t truly sure what should be considered funny or what the writers/actors were using as teachable moments. And while, as Noel Murray says in their article, Atypical can’t be your sole source of gaining an understanding of having an autistic person in your life, much less child, it is through media we get to live vicariously. 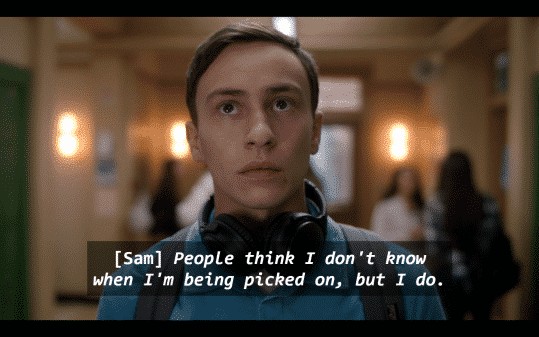 So, with that said, I come to question why at 18 it is everything Sam is going through treated as so new? Are we to believe all throughout puberty and high school he didn’t want a girlfriend? That when he likely was hanging out with his sister, who seems to be the only one who does hang with him, he didn’t watch something with her and ask questions? Granted, she is his younger sister, but it almost seems like he has relied on her for insight and protection more than anyone else. So surely between dating, sex, and even slang, she would have gotten him familiar with what is and isn’t appropriate.

For while I get the boy is socially awkward, he isn’t stupid. I’m sure between his mom and sister, someone has told him certain things can’t or shouldn’t be said to people, if not in public. I’m sure his sister, trying to avoid an awkward moment she has to fight for him, has tried to give him some social training. Not in a “Don’t embarrass me Sam!” type of way, but more so given the fact he seems to be the only one she spends time with, her trying to make it so they both can enjoy quality time together. Add in all the doctors you know Elsa has been taking him to, on schedule, and it really leads you to question, even with taking note he is autistic, how can he be this oblivious?

We Need To Talk About Evan: Casey, Evan (Graham Rogers)

You know that bad boy vibe Evan has? Especially since he got expelled for allegedly selling drugs, among other things? Well, it isn’t real. He got expelled for trying to pawn the school’s band instruments. As for why? That isn’t gone into. All we learn is that the punishment was swift and with Casey laughing about it, he gets kind of put off. So, to bring him back in, she kisses him. Something she gets so giddy about, post-kiss, it makes you wonder if it maybe her first?

With us just seeing Lundy-Paine in The Glass Castle, albeit in a forgettable role, it makes seeing her again so soon quite curious. Especially since it seems her career is about to blow up. Just this year alone, according to IMDB, she’ll have 3 movies out, including The Glass Castle.

But, focusing on Casey, there are a lot of questions that need to be asked here. Perhaps the one which really has me raising my eyebrow is: does she have a life? During track practice, it seems clear Sharice (Christina Offley) is her friend. However, as noted in the first topic, you never see her hang out with anyone but Sam. Now, we could contribute this to how focused she is on track and how much she wants to get away from her family, but surely Evan isn’t the first guy to approach her, right? Much less, the first one who was persistent and seemed interesting?

Finding Someone Who Needs Me: Elsa, Doug, Nick

After Elsa’s autism mom group, she reveals Doug did something. It isn’t clear if he cheated, was abusive, asked for Sam to be aborted, put in a home, or what, but it seemingly weighs on their relationship. To the point that when Elsa sees Nick (Raul Castillo) again, so comes the butterflies. Then, to make matters worse, rather than curve him like she did before, she gives him her number.

Which can only be contributed to her wanting to be needed. For with Casey not needing her, Doug may be showing he doesn’t need her, and now Sam gaining some autonomy, what is she left with? What will she be left with rather? Well, it won’t be empty nest syndrome but more so being forced back into caring about herself, her happiness, and things of that nature. Which, considering how Sam sort of put a pause in all that, who knows what decisions will be made when Elsa puts Elsa first?

I need to know what Doug did. The go to options would be either cheating because of how stressed out his family was making him, or else him being violent. Something which may explain why Sam has been distant from his father. Maybe during that baseball game he hit Sam, or maybe yelled at him to the point it frightened him, and that is why they are just now getting close?

Either way, it seems while Elsa fears what life will be like if Sam decides to really take control of his life, she seems to fancy the idea as well. She can perhaps go back to dancing, maybe find a new husband, and make it so being a mom is just one of her titles, instead of a job.

However, as said in the premiere episode, I hope they really don’t push this storyline too much to the forefront. I get we are in a real renaissance when it comes to older women getting complex roles, but I’d hate for it to be off the back of an actually compelling story. However, like with Jason Bateman in Ozark, Leigh is a producer here so she may use said power to sway some, or a lot, of screen time her way.