Wherever I Look
Recaps, Reviews, and So Much More
Home Anime Violet Evergarden: Season 1/ Episode 3 “May You Be an Exemplary Auto Memoir Doll” – Recap/ Review (with Spoilers)
Anime

Violet Evergarden: Season 1/ Episode 3 “May You Be an Exemplary Auto Memoir Doll” – Recap/ Review (with Spoilers)

After struggling to express herself, a young woman named Luculia seemingly breaks through and helps Violet become in touch with her feelings.

Table of Contents show
1 Episode Focus: All The Skills, Only A Inkling Of The Emotion | Violet, Luculia
1.1 Commentary
2 Other Noteworthy Facts & Moments
3 On The Fence
3.1 Whether Luculia Is A One Episode Character Or Not
3.2 Follow Wherever I Look on Twitter or Like us on Facebook.
3.3 Previous Episode’s Recap

Episode Focus: All The Skills, Only A Inkling Of The Emotion | Violet, Luculia

As Claudia said he would, off Violet heads to an Auto Memory Doll class ran by Instructor Rhodanthe. Someone who Violet understands immediately with her military-like command. Plus, with Violet having superb skills in grammar and style, she becomes a star pupil. That is, until she is asked to do something which required emotion.

For, think about it, Violet learned how to read and write, likely, by doing Major Gilbert’s reports. So writing something which requires feelings, something people in the military don’t have time for, it is a skill which has to be taught in full. However, be it Cattleya, Iris, Erica, or Claudia, they couldn’t break through. Heck, Rhondanthe technically didn’t either. Yet, Luculia did. A girl who is just a local Leiden gal.

However, she is the first one who finds a way to truly engage Violet. Unlike Erica, there isn’t this sort of desperation or obligation in her interaction. Nor this feign sense of loneliness. With Luculia, Violet experiences someone who is genuine. Hence why she doesn’t say a word about not desiring to hang out with her and see a view of the city. She just goes. Heck, even with the original letter she wrote, you can tell Violet was actually invested in her since it wasn’t as brutal as some of the past letters she wrote.

Making it so, when Luculia decided to really show she wasn’t going to leave Violet behind and was there for the long haul, she might have touched a nerve – in a good way. After Major Gilbert dying, or maybe still disappearing in Violet’s mind, someone sticking around after going through something difficult probably means the world to her. So, with that connection, she wrote a succinct but efficient letter.

Leaving me to hope this friendship isn’t for but an episode but may last for the remainder of the season. 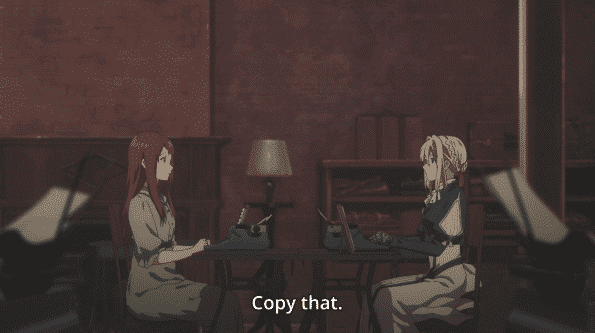 In my mind, the combination of a military classroom, with a drill sergeant in front, put Violet at ease. It was familiar to her and Luculia introduced herself under perfect conditions. For I think that may have triggered basic training for Violet. And while, yes, we don’t know if she associated with anyone but Major Gilbert, I’m sure while she was following him like a puppy dog, she had to sometimes talk to other people.

After all, to my understanding, she wasn’t highly ranked by the time she got out. So between living quarters with other women, doing and handing off reports, among other things, I want to assume she had some acquaintances. Though, maybe that is also how Luculia broke through. She wasn’t quick but took her time, didn’t yell or berate when Violet struggled, and presented that sort of maternal hand that might have been foreign, but became a bit welcoming.

Which pushes me to question, before Major Gilbert’s older brother bought her and handed her over, where was she? What was she doing? To my understanding, while she has highly advanced hands, she isn’t an outright robot. So what kind of cruelty did she experience to make her so numb to the world that the expression, “I love you” is completely foreign?

I especially wonder this for it isn’t like she was given to Major Gilbert as a child. Violet had to at least be in her teens. So are you telling me no one, up till Major Gilbert’s last breaths, expressed any sort of feelings of love or affection? To say the least, watching Violet interact and deal with people reminds me of watching shows with high functioning autistic people. You are truly pushed to wonder how and why, just when we get introduced to them, now they are experiencing all these major life changes – despite their age.

Whether Luculia Is A One Episode Character Or Not With us learning about her parents dying, her brother drinking to deal with the guilt, and her being a major catalyst for Violet, I hope she isn’t a one episode character. I can imagine her being so since anime does these type of things all the time. Yet, I feel like she did more than just removed a roadblock but might have made a significant change in Violet’s life. The kind which others can’t duplicate easily.