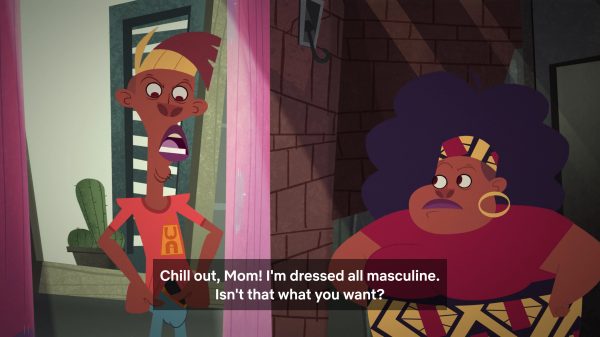 Donizete: Chill out, mom! I'm dressed all masculine, isn't that what you want?

The serious issue of this episode is gender expression – especially for those who lack socio-economic privilege.

After quite the wild pool party, it seems everyone expected there to be a bit of time between contact. There was, after all, a bit of drinking, twerking, kissing, and maybe more. However, after Goldiva doesn’t contact Champagne for a few days, she gets worried. Add in her calling Goldiva and Lady Elza picking up the phone and so goes off a million and one warning alarms.

Thus leading to Patrick and Ralph being sent in and them being captured by an evil Goldiva.

In the last episode, something was said which pushed the idea that Patrick, Ralph, and Donizete aren’t the only super drags out there. Also, they are the ones who get the worse missions we’re told. With that in mind, what makes them the best ones to try to rescue Goldiva? Much less, considering how Patrick and Ralph are duped, does anyone know Goldiva past her stage persona? Does she have a Twitter, Instagram, and is she open about her life off stage?

Could this be, and maybe I’m giving this show a bit too much credit, a simple critique of how fans make who they stan for everything and more? How they craft them as someone perfect for them, a best friend, who shares not only their likes and interest but sees them as the star they (the celebrity) are? Hence Patrick thinking Goldiva would duet with him and that she, like Ralph, would be a video game/ anime nerd?

It isn’t 100% clear where Goldiva and Donizete are from, or what their ethnicities are, but it is clear that they are queer men of color. With that in mind, we are allowed to see Goldiva, as a child, dealing with the same issues Donizete deals with as a full grown man. That is, someone trying to limit their gender expression and that someone being their parents. For we find out, after Donizete defeats the fake Goldiva, that the house Lady Elza had Goldiva in was her childhood home. So this nightmare scenario had layers to it.

Of which, seemingly, Champagne, or a Champagne-like fairy godmother, made baby Goldiva feel loved, accepted, validated in his pursuit of feminine beauty. Thus allowing a little boy whose parents didn’t support his highlight finding someone who illuminated it and allowed it to turn him into a diva – Goldiva. Which explains why in the world Goldiva would run to Champagne with her problems.

I’m not off right? Champagne decided to act as a mother to Goldiva and that is why she is the person they are today right? Also, that is why, of all people, she went to her when her show got shut down? I ask this because it could just be they didn’t want to introduce a new character so Champagne could have very well been a placeholder. However, considering Champagne can sing, or at least lip-sync, and has Goldiva’s number, there is a chance they have something real right?

That aside, while better than Ralph’s episode, I was kind of iffy on the fight back on Donizete and Goldiva’s struggles with gender expression. Yet, I recognize that sometimes you have to appreciate someone addressing the issue. It’s just, when it is addressed, especially since there aren’t any shows like Super Drags, unfortunately, there is this desire for them to obliterate the topic. You know, do everything and more. Which, when you really think about it, is an unfair expectation. For all the people involved can speak on is what they went through. Not to say they can’t do research and make the dialog and situations more universal. But, there is something about when writers, directors, animators, voice actors, etc, take from their own life vs. are trying to hold an entire community on their backs.

With Goldiva free and the concert starting, you may have thought she is just going to make a late entrance. However, instead, Lady Elza shows up to steal her thunder. If not take back the stage Goldiva was given when Lady Elza got up in age.

Since we addressed ageism with Patrick, I wonder what will be said when it comes to Lady Elza? Clearly, getting older, perhaps losing the fame she once had, that is the driving force behind attacking Goldiva and sucking the highlight of the youth. But could it also be something else? Taking note of Paris Is Burning, it doesn’t seem like Lady Elza is someone with an old-school style who is trying to turn back time or anything like that. So could it simply be she wants her old relevance back and that’s it? But, since old queens are set aside, seen as relics from a bygone era, she feels disrespected by those she paved the way for?

There is only one episode left so we’re about to find out.