How Not To Summon A Demon Lord: Season 1/ Episode 9 “Holy Knight Tale” – Recap/ Review (with Spoilers) 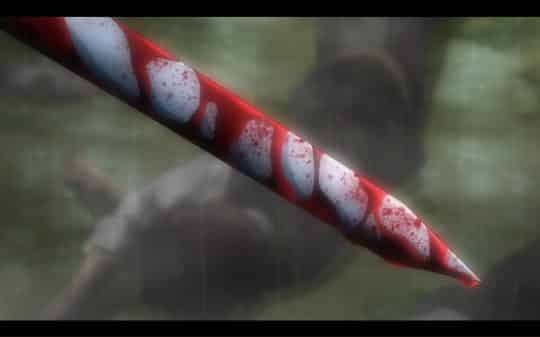 Edelgard returns with a way to rid Rem of the Demon Lord Krebskulm and we get introduced to yet another soldier who is a psychopath.

It Was Such A Nice Day Too: Rem, Shera, Diablo, Edelgard

Being that Shera is knowledgeable in some areas, but isn’t necessarily the best adventurer, Rem and Diablo decide to try to teach her summon spells. Someone small though, like a bird which looks like a Pokémon. Which, with Rem downplaying its use, while Shera is happy she did the summon, at the same time it frustrated her. That is, until Diablo helps her realize, using her summon’s ability to see from its eyes, combined with Shera’s archer ability, it could become quite useful.

And after all that work, this leads Shera’s nose to smell something and swear it is Rem. Who, with being a pantherian, doesn’t understand how it can be her since they don’t sweat the way other humanoid beings do. Yet, to dispel the idea she stinks, so comes this week’s ecchi moment of her and Shera taking a bath in the river – naked. Which includes licking, grabbing and pinching.

And then suddenly Edelgard shows up because, why not? Luckily, it isn’t to ambush Diablo and his friends but rather to confirm rumors that Rem has Krebskulm sealed inside of her. Which is admitted to and with that, Edelgard offers a way to bring her out without killing Rem. Especially since, unlike how Rem thought, the Fallen do not look to Rem as a ends to a means but more as a mother. So killing her isn’t something they want to do, they rather just summon or release Krebskulm. 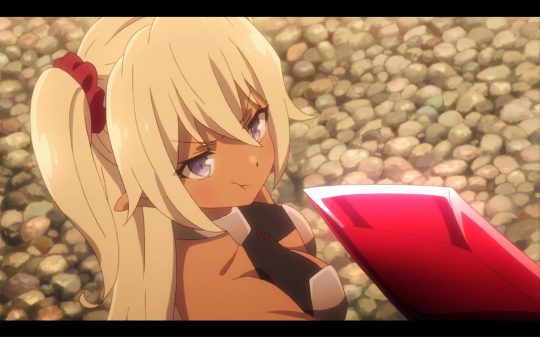 All I really want is one episode that’s like Grimgar of Fantasy and Ash where they actually act like adventurers. You know, go on quests, fight things, collect items, and maybe there are some actual risks involved. Is that a lot to ask? Well, might just be. For after the action-packed episode we got last week, it seems the show wanted to get back to basics. Boobs, softcore stuff, and Diablo in squash matches.

But, at least Edelgard returned. Though far from the strongest villain on the show, she is one of the few you’d love to see becoming a good guy. If just out of hope she’d reveal why she became, or past generations, a fallen and understand their culture more.

As shown by Lord Galford, you don’t get to be a high ranking member of human social structure without being powerful, conniving, and a little bit crazy. Saddler is yet another example. This paladin of the imperial capital’s Orthodox Church is like an inquisitor of sorts. He goes from village to village providing “salvation” by killing those who question either the lord or him. Hinting heavily that he is an arm of some form of corruption since it seems he, like Alicia, goes to where he is asked to.

Which, for his next assignment, seemingly is Faltra. Something that worried Alicia for she knows how Diablo is and with him calling himself a Demon Lord, that makes him a target. However, when the two face off, after Saddler tries to choke the life out of Rem for calling him out, Saddler is easily defeated. Even though is over level 100, as Lord Galford is. With, surprisingly, his followers doing nothing but taking the petrified Saddler, turned to stone by Diablo reversing his spell, away by means of retreating. 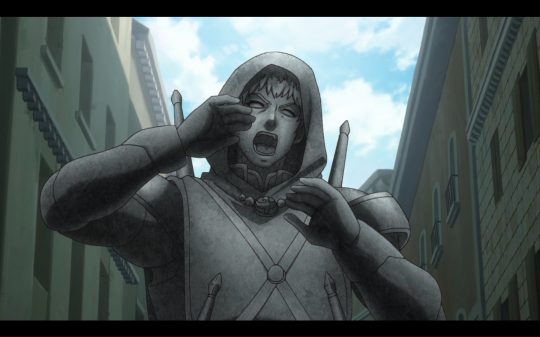 Wasn’t there two people in the beginning? I can swear we heard two different voices killing people with a similar blade? Is my hearing off? That aside, it is kind of getting old for Diablo to have squash matches like this. One of the reasons the last episode was so good is because Diablo was forced to put in effort, think a bit, but Saddler joins a long line of villains on this show who are just notches on Diablo’s belt.

But, one good thing which does come of this fight is another example of the tyranny of humanity. Alongside it being more and more clear how the world is ruled with an iron fist and a bit of a hit team when it comes to not only maintaining control but increasing influence. How else would you explain the king not wanting a big deal made of Lord Galford killing a crown prince and the crown princess becoming an adventurer who wanders around? With no one next in line, it means possible civil war and a new kingdom to conquer, more land to have, and definitely more slaves. Which, with the way this show is, you can bet there will be laborer slaves and sex slaves.

Something Is Not Right Here: Alicia, Rem, Diablo

It’s about time to meet Edelgard at Starfall Tower and Rem feels the need to tell Alicia her truth. Which Diablo doesn’t like before it happens, feels uncomfortable with it as it happens, yet blames said feelings on issues with communication and lack of friendships. Since that charm in episode 6, with seeing the diversity of members of the Fallen, and it being noted how rare women being imperial knights are, including the opening, Alicia being an undercover Fallen wouldn’t be a surprise would it? If not another organization which doesn’t support the crown and wants to topple the king.