“Family” is another episode which gives one noteworthy detail while the rest feels like filler.

With being 3 days on the road and sleeping in cars or on the dirty ground, albeit, in a sleeping bag, a motel in the middle of nowhere is a saving grace. Albeit one which draws suspicion, especially considering how nice it is, never mind how the hell it gets power with all the power lines cut, but why look a gifted horse in the mouth? However, everyone soon comes to learn the owner, Matthew, had made a deal with a liquid horror to reverse his fortune.

You see, at one time Matthew, his wife, and son George lived in Russell City and were well off. Now? Well, they are damn near destitute. Thus him making a deal where the horror eats guest and seemingly provides Matthew with money. However, his newest guest destroys the horror and sadly Matthew in the process. For, as we learn, there is no way to separate the two once the contract or bond is made. To kill the horror you must also kill its host or contact. 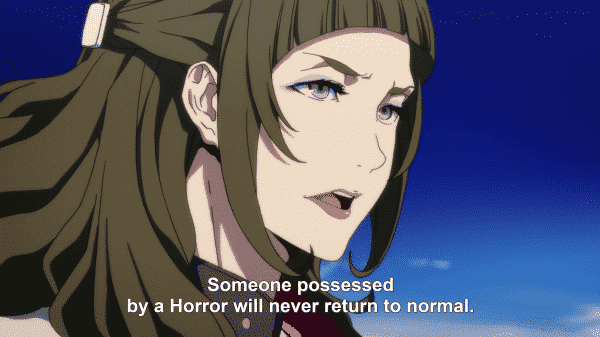 I feel like we’re back at that point where El Dorado is something occasionally talked about, but something we’re not going to see anytime soon. Which gets compensated with little tidbits like, hey – yeah, we can’t save people once horrors get involved. To kill the horror, usually, we have to kill them. Also, the whole mind rewrite thing, it isn’t just a Luke thing. Perhaps that is just a general skill those, unlike Sword, know. Oh, and horrors can come in liquid form. That’s good to know.

Outside of that, honestly I miss some of the more impactful stories which made you wish the characters featured would have returned. Like Hardy and Enith’s story in episode 2. Yet, so it seems, we have returned back to the issue noted in episode 2. The issue of women being abused seemingly being the spice to make a story more dramatic and when that doesn’t work, we just listen and watch Sword’s breast fascination.