While this is a Christmas episode, love is in the air like it is Valentine’s day. Though, unfortunately, one person with unreciprocated love comes around to ruin things.

Table of Contents show
1 Christmas Isn’t Christmas Anymore: Doug, Maddie, Chimney, Buck
1.1 Commentary
2 All I Want For Christmas Is Mom: Christopher, Shannon, Eddie
2.1 Commentary
3 Taking The Next Step: Athena, Bobby, Michael
3.1 Commentary
4 Highlights
5 Low Point
6 On The Fence
7 Follow Wherever I Look on Twitter, Like us on Facebook and Subscribe to the YouTube Channel.
7.1 Check Out Other TV Recaps

With it being her first Christmas out west, naturally, Buck wants to make his sister’s first Christmas without Doug special. Also, being that he is slowly, but surely, trying to win her heart, Chimney wants to help. Problem is, there is a lot of trauma associated with Christmas. It was when Maddie’s last major injury happened and also when she decided enough was enough. Something Buck didn’t know, or understand, which led him to saying some hurtful things.

Luckily, Chimney is a bit more understanding. He decides to just do the basics but, while doing so, unfortunately, he leads Doug right to Maddie. Chimney: Christmas is supposed to be about feeling safe and warm.

We will not know till March what comes of this. I feel a certain type of way. Not because of Doug, that seemed bound to happen sooner or later. My issue is I wanted to see something come out of Chimney’s feelings for Maddie. Not that his kindness means he absolutely had to be rewarded, it’s just clear these two are into each other you know.

So as much as you realize she needs to take it slow, especially after the trauma she experienced, we’re in that weird place. That is, that space between what you know, in reality, she needs yet, with this being fiction, you want to see happen. Mostly because of how much Chimney has dealt with and how long his life has seemingly been on pause. Especially in terms of romance.

All I Want For Christmas Is Mom: Christopher, Shannon, Eddie

Being that Shannon physically left once, Eddie is a bit cautious about letting Shannon back in Christopher’s life. Thing is, Eddie isn’t that innocent – despite how he has long been shown. For while he now is very active in Christopher’s life, it is revealed to us when he was first diagnosed, that was around the time he, Eddie, could have come home or reenlisted. Thus fleshing out the whole conversation Shannon had about feeling abandoned by Eddie. Not just when her mom was sick, but him using the shield of being a veteran to protect him from scrutiny.

However, with Christopher wishing to see his mom for Christmas, Eddie steps aside. Thus allowing Christopher’s Christmas wish to come true. 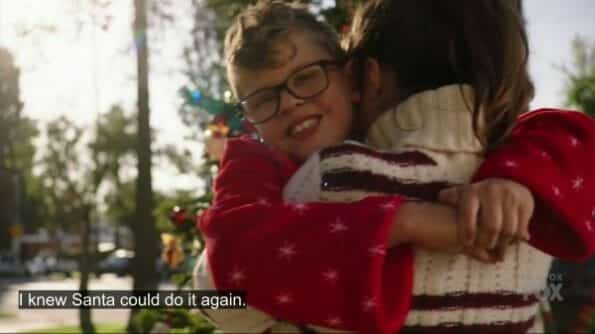 Christopher: I knew Santa could do it again.

Again, why is Eddie getting more development than Chimney? I mean, Hen had to get an entire episode dedicated to her first year or so to match up to all Eddie got. And I’m not counting Hen’s issues with Eva and Karen since that was more so drama to fill time than character development. Which makes me feel, when this returns, they need either a Chimney dedicated episode or push Buck to the back and let Chimney step forward. Not just because of the Doug storyline either. Give him a life, have his family visit for a bit – something. It’s highly unlikely he is going anywhere so treat the character accordingly.

It has been, perhaps around a year since Athena and Bobby started dating. It has gone well, her kids accept him and don’t treat him like an uncle or second dad, but he’s cool. But, let’s be honest, there is still probably some issue with how quickly Michael got to start over while Athena is taking baby steps. So, with Michael having someone to cuddle up with and Athena usually having to say goodbye to Bobby, she asks him to move in. I mean, it isn’t like there is much in his apartment nor does he have a life outside of work and spending time with Athena so, why not?

Thing is, Bobby wasn’t ready and the question came out of nowhere. Leading to him taking a few steps back and doing what most people do – avoid the awkwardness of having to give an answer. However, like most shows of this ilk, a patient pushes Bobby to make a decision. One which goes beyond moving in and him proposing. To which Athena answers in the affirmative. 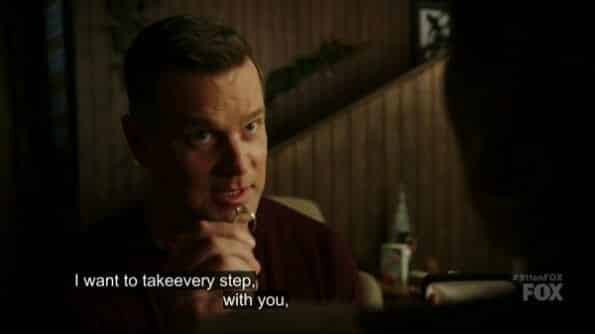 Bobby: I want to take every step with you.

These two are just consistent surprises, aren’t they? But, hey, Athena getting to be happy is a gift. Plus, it could mean a beautiful season finale of these two getting married. Maybe with Maddie catching the bouquet? Because, yes, every topic will wind back around to Chimney and him getting happy. It just feels like yesterday that Athena learned her husband was gay, moving on, and she was handcuffed to a bed asking Hen to come save her.

Also, it wasn’t too long ago Bobby was dealing with the trauma of his family dying and him having suicidal thoughts. You see how far that journey is? How three dimensional they made these two? Yet, what is the most interesting thing to come out of Chimney’s story? A rebar through the head and his ex dropping him before she’d have to play nurse. Only, later on, show up married and pregnant.

What I’m trying to say is: They need to stop doing Chimney dirty like this.