Wherever I Look
Recaps, Reviews, and So Much More
Home Movies The Truth About Christmas – Summary/ Review (with Spoilers)
Movies

The Truth About Christmas – Summary/ Review (with Spoilers)

The Truth About Christmas tries, it tries really hard. But I can’t firmly say it succeeds in everything it was trying to say or do.

Jillian is the girlfriend, and campaign manager, of George, a city councilman who soon will campaign to be mayor of New York. Which means, with them being in politics, she has to spin, rephrase, redirect, and outright lie. For the most part, nothing and no one holds her accountable for her lies, besides one reporter. However, when she lies about getting a toy for George’s niece and tricks a little girl into giving her the last one, Santa steps in.

How? Well, because Santa in this movie has powers that can manipulate people, he coerces her to be unable to lie for a few days. Something which doesn’t only complicate things for George’s political career, but also Jillian meeting his family. A family that, if she plays her cards right, she could marry into.

The Premise Was Funny & It Sometimes Worked

As Jillian notes in the movie, meeting your significant other’s family is tough. Trying to be likable is also difficult. So, not lying to get through the visit? HA! And it is with Jillian telling the truth you get a whole lot of awkward moments. Some of which are cringey and will make you grimace. However, others will giggle a bit just from the ridiculousness of the situation. Especially a running gag dealing with Jillian climbing from the second floor just to avoid conversations.

I Was Way More Into Blake and Jillian Than George & Jillian

The more we get to know about Jillian, in terms of her background and who she is when unable to lie, the more you question how long she and George may last. But what makes things really complicated is the more time she spends with Blake, George’s brother, you see something there. I’m talking about enough chemistry where you can imagine her switching brothers. That is, if this wasn’t a holiday movie but a theatrical romantic comedy. For while the inability to lie supposedly reawakened who Jillian is, one could argue spending time with someone like Blake, who isn’t about airs and graces, was the true reason.

What Is This Movie’s Identity? 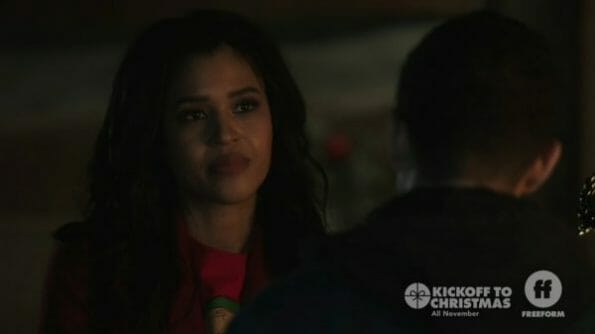 In a way, it seemed like this movie didn’t fully know what it wanted to be. It took place around Christmas, so it seemingly wants to gear itself to be a holiday movie. Yet, with how close Jillian gets to Blake, sometimes it seems like it wants to be a romantic drama. Add in Jillian finding herself after lying to herself for so long, even lying to George about things she liked and loved, it seems like a mid-life awakening. All of which it doesn’t really do all that well.

Don’t get me wrong, it’s good enough to kind of enjoy. The problem is, it doesn’t go far enough with anything it brings up. There isn’t a huge amount of depth to Jillian’s struggle in rediscovering herself and what that means for not just her future, but her future with George. When it comes to the holiday element, there isn’t a lot of touching family moments.

Then, taking note of the comedy, like George’s sister talking about how she and her man lied about getting married, it isn’t made to be something funny or plant the idea this family is a hot mess. It’s just information dropped that you’d think would make the parents upset but instead, they remain as stoic and static as ever.

I was initially excited by the idea of FreeForm releasing their own holiday movies. After all, their Christmas celebration has been going on since I was a kid. So them not having original movies released during this time seemed kind of odd. Especially since they are the teen/young adult arm of Disney. However, this movie gave me serious pause and makes me hesitant to watch what is to come. For while “No Sleep Till Christmas” seems like it could be good, I feel like I’ve already been tricked once. The second time will be my own fault.